2 weeks ago 0 1 min read
We use cookies to provide a personalized experience for our users. By continuing to browse this site, you give consent for cookies to be used.
Got it!
Home > Health > Experts raise alarm about overuse — and overdoses — of melatonin sleep aid for kids 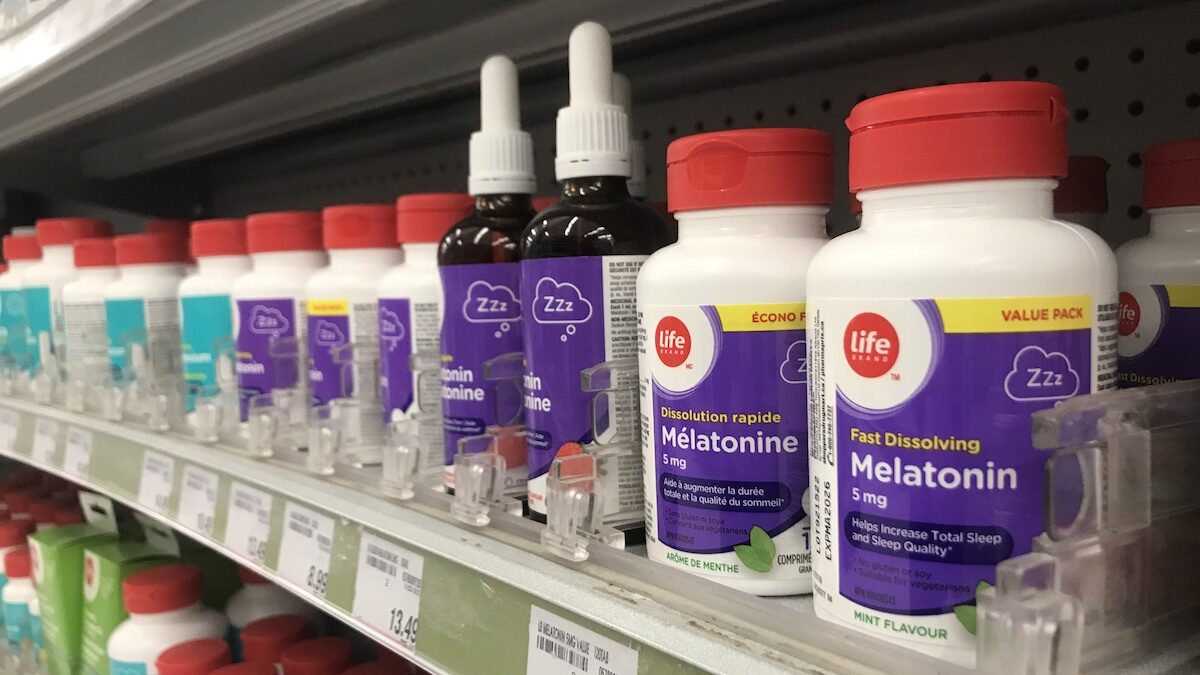 Supplemental melatonin use has increased in recent years. Experts are calling for regulation of the over-the-counter supplement. [Photo © Isabel Harder]
Canada

By Isabel Harder and Pippa Norman, 2 months ago 0 8 min read

In the midst of the COVID-19 pandemic, Brenda Duke finally gave in and handed her eight-year-old son a melatonin gummy — something she’d been dead set against doing since he was born.

It was March 2021 — a year into the COVID-19 pandemic — and stress levels were high in Duke’s Old Ottawa East household. She had decided to homeschool her eldest, Sebastian, while also taking care of her two other boys, ages four and six. Until he was about seven, Sebastian hadn’t had trouble sleeping, just like his brothers.

But during the pandemic, Duke said she and her husband began noticing Sebastian was staying up past even his parents’ bedtime.

“We were finding that we were going upstairs whenever we go to bed, which is probably too late anyway, around 10 or 11, and he was just wide awake,” she said.

Worried this lack of sleep would affect his learning, Duke said they tried several strategies to get him to sleep: a later bedtime, a warm drink, red lights and even sleeping with him.

At this point, Duke, who has struggled with insomnia, was desperate for a solution. She said she talked to her husband, a pharmacist, about the possibility of giving their son melatonin — a naturally occurring sleep hormone available in synthetic form over the counter.

Patients often use the supplement to increase the duration and quality of sleep, to relieve pain associated with inflammation or pre-menstrual syndrome (PMS), or to alleviate symptoms of seasonal affective disorder (SAD).

Duke’s husband doesn’t recommend it to adults, she said, because of a lack of regulation in production. But after some discussion, Duke said her husband was willing to give it a try, providing it was one gummy.

‘It wasn’t an easy decision to come by. (My husband) eventually said, well, we’ll try it, we’ll try with one. And the first night he fell asleep within maybe a half an hour.”

— Brenda Duke, Ottawa parent, on the choice to give her son melatonin

“It wasn’t an easy decision to come by,” Duke said. “(My husband) eventually said, well, we’ll try it, we’ll try with one. And the first night he fell asleep within maybe a half an hour.”

Now, Sebastian takes his almost nightly melatonin gummy around 7:15 p.m., goes to another room to do a quiet activity and then joins his sleeping brother in their shared bedroom when he feels tired.

Sebastian isn’t the only child whose melatonin intake has increased during the pandemic. Melatonin use has increased so much that doctors and medical associations are issuing advisories to consult a physician before giving a child melatonin.

Over the last decade, calls to American poison control centres to report pediatric melatonin overdoses increased more than 530 per cent.

“Increasing use of over-the-counter melatonin might place children at risk for potential adverse events,” said a study co-authored by a team of Michigan medical researchers and published by the U.S. Centers for Disease Control and Prevention. “Public health initiatives should focus on raising awareness of increasing melatonin ingestions among children and on preventive measures to eliminate this risk.”

Most of these ingestions were accidental. The AASM is recommending parents keep melatonin supplies secure and away from children as they would any other medication, and that they consult a physician prior to giving their children melatonin.

In Canada, HealthLink B.C. recommends consulting with a doctor before taking the hormone supplement. A 2015 safety review by Health Canada says the same. While research into melatonin has been ongoing since the synthetic hormone hit Canadian markets in 2005, new concerns are rising as use increases.

Dr. M. Adeel Rishi is a pulmonology, sleep medicine, and critical care specialist at Indiana University Health Physicians and vice-chair of the AASM Public Safety Committee. He said melatonin overdose can look different for everybody, and can even result in death.

Melatonin overdose is often characterized by dizziness, headache, irritability, confusion and  shallow breathing. Dr. Rishi said it’s difficult to tell how much melatonin will cause an overdose.

“What the correct dose of melatonin is has not really been established by trials and studies,” he said.

Melatonin is unregulated in the U.S. and Canada. In the U.S., Dr. Rishi said, the amount of melatonin in each pill across brands can vary. Supplements in the U.S. can have 80 per cent less melatonin than is described on the label or up to 400 per cent more. He recommends patients looking to buy melatonin select brands with the United States Pharmacopeia (USP) label because those products are more regulated.

“It’s not sold as a medication. Supplements are not under the same oversight by the FDA as medications are,” Dr. Rishi added, referring to the U.S. Food and Drug Administration. “Unfortunately, manufacturers have a lot of leeway in what they put in the bottles.”

Accidental melatonin overdose is more common in children because maximum ingestions for children are smaller than for adults. Children may also be more likely to overdose on a melatonin gummy rather than a pill, because it looks and tastes like candy and comes in a package that is not child-safe.

Christian Benedict, an associate professor of pharmacology at the Department of Pharmaceutical Biosciences at Uppsala University in Sweden, said it’s often the case that patients who take melatonin don’t even need to supplement.

“Older people, on average, produce less melatonin, often because of the fact that their pineal gland is calcified. Then, I would say they should supplement,” Benedict said.

“The majority of people don’t need more melatonin, but they nonetheless supplement. This means they have supra-physiological levels of melatonin in their blood,” he added. “This cannot be good. Even if it is a hormone produced by our body, if you have too much of it, it can delay puberty or impair your blood sugar control.”

Melatonin use has increased significantly since March 2020, the start of the COVID-19 pandemic. Combined with unregulated dosage, this situation can lead — and has led — to fatal misuse of the supplement.

Up to 25 per cent of healthy children experience insomnia or difficulty with sleep. That number increases to 75 per cent for children with neurodevelopmental disorders. During the COVID-19 pandemic, disruptions to Canadians’ sleep have increased because of changes in routine, sleep schedules and psychological stressors.

Benedict suggested doctors should look to the causes of insomnia or other sleep disorders. He noted talk therapy as a preferred response to insomnia, instead of medication.

“(There) will never be a one-size-fits-all solution. If you have other things such as recurrent nightmares because you went through trauma, we could use weighted blankets as an add on, but they will never replace conversation therapy with a psychiatrist. You have to tailor your sleep therapy to the underlying cause.”

For patients intent on increasing their melatonin intake without supplementing, emerging research may provide other methods to try. In addition to reducing screen-time, including melatonin-rich foods in one’s diet, and adhering to a sleep schedule, Benedict’s research shows weighted blankets may be another tool patients can use to improve their sleep.

In a study published in the Journal of Sleep Research, Benedict observed 26 participants and found melatonin levels increased after using a weighted blanket. While Benedict said more research is necessary to prove this correlation, he added the extra efforts to promote sleep naturally can’t hurt.

“When patients with insomnia use weighted blankets and they reduce their insomnia’s severity, is it important from a clinical point of view to understand why? No,” Benedict said. “It doesn’t matter. It could even just be placebo. As long as they improve, that’s fine.”

A weighted blanket might be next on Duke’s list of strategies to get her son to sleep. After a year of giving him melatonin almost every night, it seems to have lost its efficacy.

Recently, there have been nights when Duke said she’s gone upstairs and found Sebastian still awake, despite having taken his melatonin gummy a few hours earlier.

“It can’t just work sometimes. That doesn’t make sense to me,” she said.

Now, Duke faces the decisions of whether to cease her son’s daily dosage and save it only for occasions such as when she and her husband ask a babysitter to put her children to sleep.

“I go back and forth with my choice to do it,” she said.

This difficult decision is one Duke said she knows is also faced by other parents who give their child melatonin and sua guilty conscience.

“I don’t want to feel guilty because I don’t trust it,” she added. “But I also feel kind of trapped. I don’t know what else can help.”