4 days ago 0 3 min read
We use cookies to provide a personalized experience for our users. By continuing to browse this site, you give consent for cookies to be used.
Got it!
Home > Sports > OHL draft to go ahead despite cancelled season 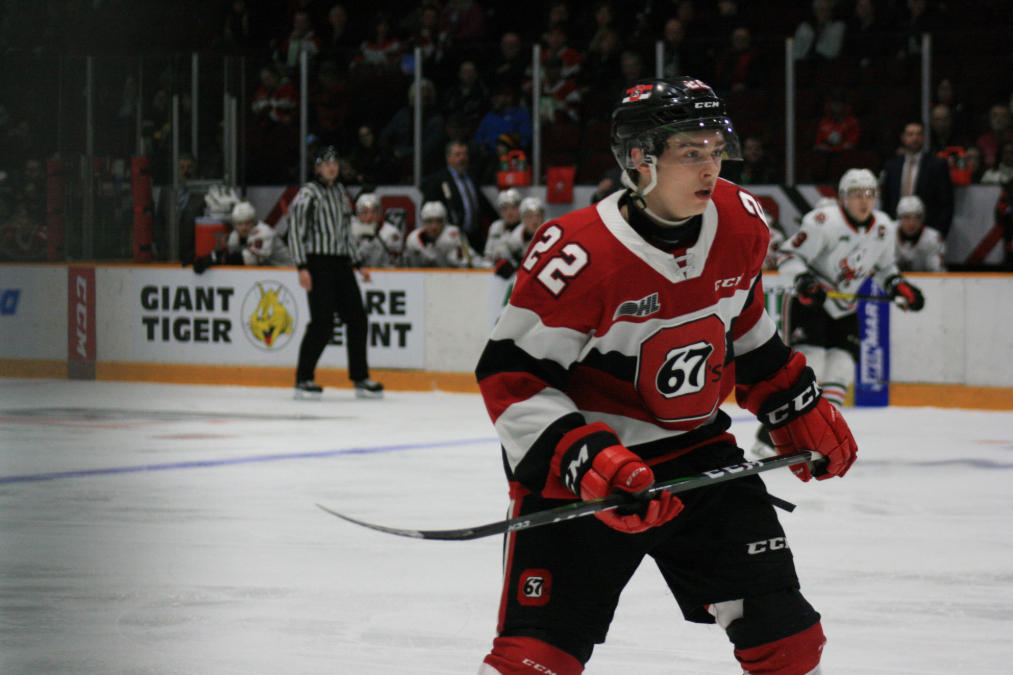 The Ottawa 67's will be looking for future stars on April 4 to replace players such as sniper Jack Quinn, who is a potential first round draft pick in the upcoming NHL Entry Draft. [Photo © Mark Bahensky]
Hockey

The Ontario Hockey League officially cancelled its season on March 18, six days after the league suspended the remaining regular-season action. But the OHL Priority Draft is still scheduled to proceed as planned and will be streamed live on the league’s website on April 4, despite the cancellation of the remaining 56 regular-season games.

The Ottawa 67s, who won the Hamilton Spectator Trophy for the second year in a row as regular-season champions, will have the 20th pick in the draft.

“Obviously it’s going to be different, just turn on the television and that tells you it will be different from any other year,” said Darren Keily, general manager of the Kingston Frontinacs.

The draft does not require representatives of the league’s 20 teams to be in the same building, making it relatively easy to carry out online. Once a team has made their pick they announce it to the other teams via a conference call.

Each pick will be made by the team’s hockey operations staff including managers and scouts. Whether that will be in person remains to be seen.

“We are there to draft, depending on what the OHL says,” Keily told Capital Current.

The league’s final standings were based on the teams playing an equal amount of regular-season games, with the tiebreaker being regulation/overtime wins.

The draft is an important step that the teams will take to build their rosters for next year but the leg work is done long before draft day. Scouting younger players means being in rinks watching players live as game video is almost nonexistent.

This has been a different year. Scouting at this level was restricted by many youth hockey leagues, including Hockey Eastern Ontario Minor which runs AAA in the Ottawa area. Their season was cancelled on March 18, robbing local scouts of a last look at players before draft day.

“It’s a tremendous blow. Think about 15 and 16-year-olds kids that they had their eye on for the upcoming OHL draft, you don’t get another look at these kids, you don’t get to see them again,” said Ian Mendes host of the Drive on TSN 1200. “Everything is going to be weighted on what you saw out of these kids in November, December, and January.”

But at least one veteran says he’s still confident scouts have seen all they need.

“Most of the scouting books are complete,” said Dave Thériault, a scout for the Gatineau Olympiques. “We’ve been in the rinks since September.”

Normally the OHL Cup put on by the Greater Toronto Hockey League is the last look that teams get at players before the draft. The tournament features AAA teams from across Ontario and the United States.

“All the guys do their homework throughout the year, and that is the last look. Obviously we would have liked to not be in this situation that we find ourselves in and we could have continued with the rest of the season but the right decisions have been made,” said Keily.

“There’s going to be a tremendous amount of weight put into what OHL scouts were thinking about kids playing in the GTA or Ottawa, said Mendes. “Whatever you saw out of these kids, you’re going to be riding on that. For the OHL it’s going to be an interesting draft coming up.”

In a league where it isn’t uncommon to see trades include numerous draft picks uncertainty is sure to ripple through all 15 rounds of the draft, says Mendes. He cites a 2018 trade the Ottawa 67’s made with the Windsor Spitfires for goalie Michael DiPietro which saw the 67’s give up seven picks while receiving two in return.

This year’s draft “is going to be a total roll of the dice,” said Mendes.

In The News: Wednesday April 1