4 days ago 0 6 min read
We use cookies to provide a personalized experience for our users. By continuing to browse this site, you give consent for cookies to be used.
Got it!
Home > Sports > Ontario rivals, COVID pose challenge as Carleton Ravens aim for 16th men’s basketball crown at Edmonton finals 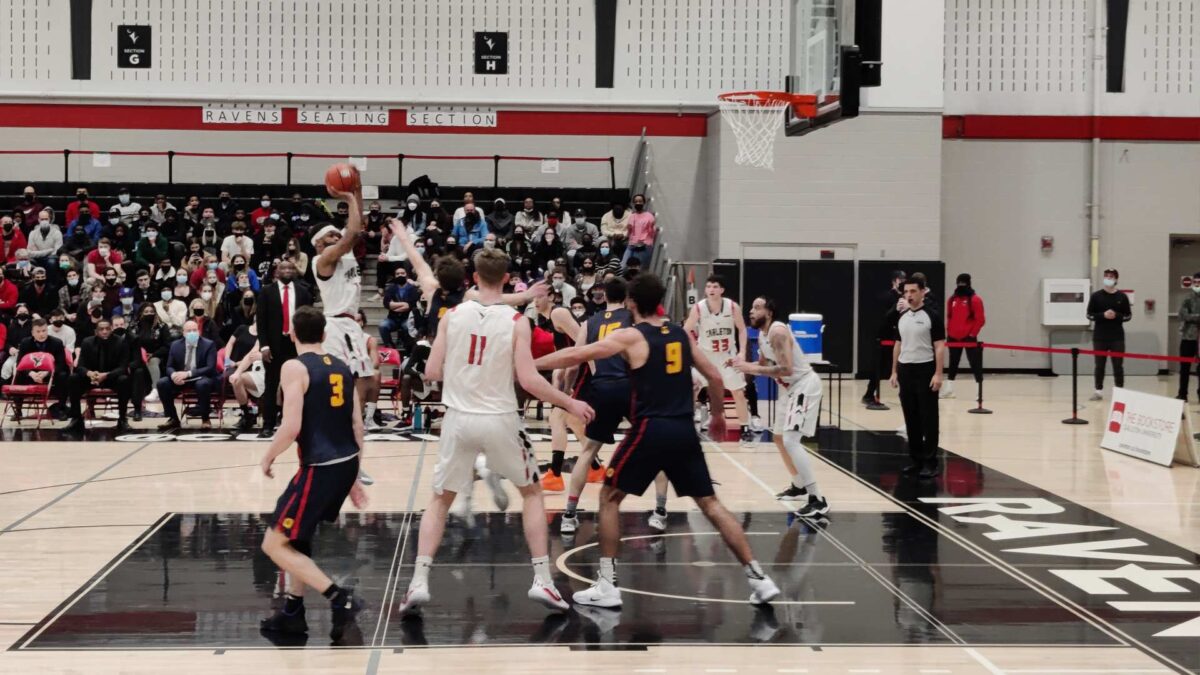 After a historic loss last week to the Queen’s Gaels in the Ontario University Athletics semi-finals, the Carleton Ravens men’s basketball team will need to outplay their provincial rivals — and keep COVID at bay — to win their 16th national championship in Edmonton this weekend.

The Ravens lost the the Gaels 86-80 in a stunning upset March 23. The Gaels then lost the Ontario final to the Brock Badgers. But as provincial finalists, both Carleton and Queen’s qualified for the U Sports basketball championships in the Alberta capital, April 1-3.

Carleton is headed to the U Sports final-eight tournament for the 19th consecutive year as the No. 7 seed. The Ravens led in all five categories that determine the U Sports at-large berth, highlighted by the team’s undefeated regular season record of 14-0.

“The Carleton Ravens, who spent the season ranked No. 1 and were undefeated in the regular season, were a logical choice to take the wildcard bid given by the tournament seeding committee, which is made up of U SPORTS coaches,” U Sports said Sunday at it announced the lineup for the national finals.

“The Ravens missed out on an automatic berth when they were upset by Queen’s last Wednesday. That loss, combined with the U SPORTS regulation that requires the tournament committee to respect conference playoff results, consigned the Ravens to the bottom half of the draw for the first time this century.”

The Ravens won the last two national tournaments held in 2019 and 2020. The 2021 championships were cancelled because of the the pandemic.

The Ravens have lost just eight regular season games in the last decade. Few teams in Canadian sports history have matched their dominance.

The No. 1-seeded Badgers and the No. 5 Gaels both represent a challenge this year. But an even bigger challenge for Carleton might not be opposition on the court.

A full-court press or a zone defence from some of the best competition in the country might be child’s play for Carleton, but a player walking into the wrong coffee shop at the wrong time could bring the Ravens down.

COVID-19, more than anything else, is the biggest variable facing Carleton at the nationals this year. While familiar in everyday life after more than two years of the pandemic, the virus is a novelty in the world of university basketball playoffs.

After the cancellation of the 2020-21 U Sports season, teams are now experiencing the high-stakes cat-and-mouse of juking the virus.

Even in the midst of a championship chase, part of the focus for the Final 8 teams will be on preventing infection.

“I told the guys, stay inside. Try to not get involved with people,” Ravens head coach Taffe Charles said recently.

Despite Ontario lifting its mask mandate on March 21 for most indoor settings, Charles said he was still encouraging his players to keep wearing masks.

“I don’t care what happens (when the mandate lifts). Wear your masks,” Charles said at the time. “(We will) try to do the best we possibly can.”

“Some guys might not be able to play if they test positive, so guys have to be ready to step up. We need to know our fundamentals and know our rotations and be ready to go.”

Connor Vreeken, a second-year Carleton guard, said the team is tested once or twice weekly. He said players are being careful and know the potential impact COVID-19 could have on their championship hopes.

If a player tests positive, Carleton will have to look outside its normal rotation of eight or nine players — assuming the team is permitted to play at all. During the regular season, having games cancelled or postponed because of COVID-19 complications was a common occurrence across Canada, although the Ravens avoided this.

“Some guys might not be able to play if they test positive, so guys have to be ready to step up,” Vreeken said following Carleton’s final regular season game on March 12. “We need to know our fundamentals and know our rotations and be ready to go.”

Beyond the Ravens, COVID-19 has wreaked havoc on the rest of the university sports world. During the Omicron surge, restrictions in Ontario and other provinces forced the OUA, Atlantic University Sport and Réseau du sport étudiant du Québec to delay their seasons.

As a result, the men’s basketball national championship — originally scheduled for March 11-13 — was moved to the first weekend of April. Jon Krywulak, event director and tournament convenor of the Edmonton championship, said the postponement affected everything from competition facilities and hotels to sponsors and vendors.

“All the work that you’ve done to some extent … you’ve got to reshape that, re-engage, renegotiate some of those terms,” Krywulak said.

Part of the difficulty of planning the event was the uncertainty of a world with COVID-19. In many parts of Canada, public health officials are warning that a sixth wave of the pandemic may be unfolding.

“We were planning for an event that may or may not happen,” Krywulak said. “You needed to plan and prep for it as if it was happening, knowing that at the last minute, something could change and it could be pulled out from you.”

Now, with the national tournament days away, the picture of what will take place is clearer. The tournament will follow local restrictions, meaning there will be no capacity restrictions at game venues. Masks will be encouraged but not required.

For teams and participants, the requirements are different. Athletes, coaches, officials and event staff are required to be fully vaccinated or provide a “valid basis for an accommodation.”

Regardless of the bumps along the way, Krywulak said he is looking forward to next weekend.

“It’s still just excitement … for the athletes, the coaches, all the participants,” Krywulak said. “I think we’ve done our due diligence. I think we’ve planned well, we’ve prepped well and we’re looking to host an excellent championship.”