2 weeks ago 0 1 min read
We use cookies to provide a personalized experience for our users. By continuing to browse this site, you give consent for cookies to be used.
Got it!
Home > Social Justice > Downtown clinic for refugees at full capacity for past year, waitlist stretched to nearly 800 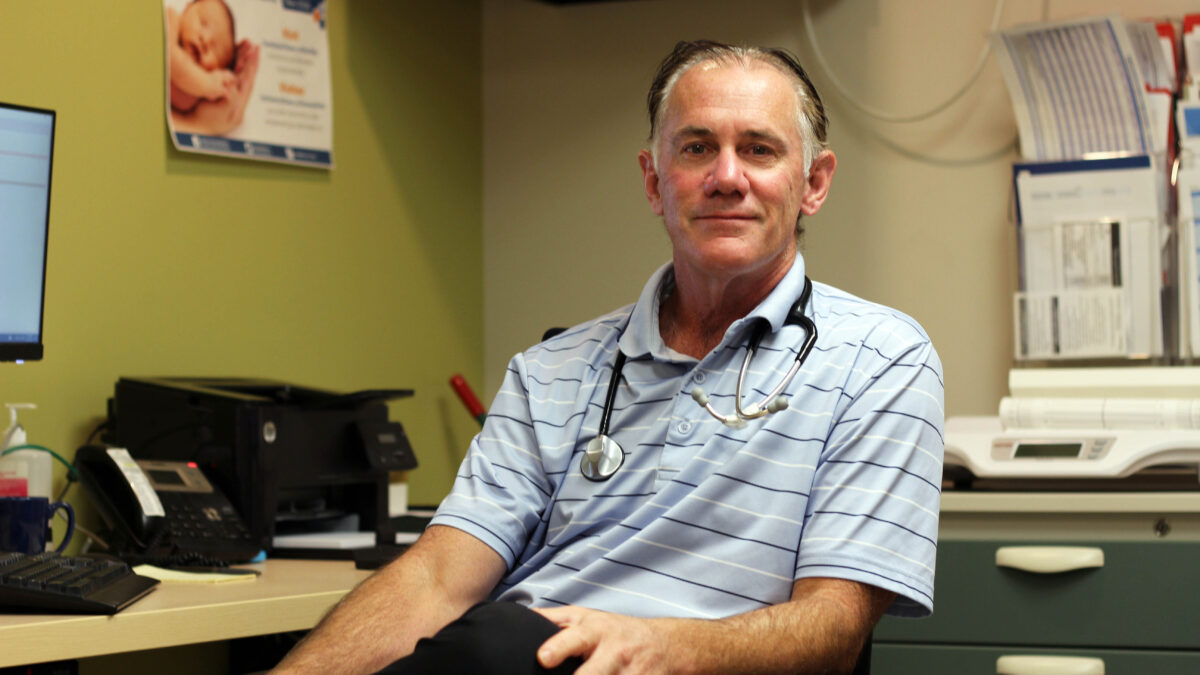 Dr Doug Gruner is a fee-for-service physician at the Ottawa Newcomer Clinic in Centretown. He said that seeing refugees struggling to access primary care in the early 2000s is what inspired him to open the clinic. [Photo © Claire McFarlane]
Community

Downtown clinic for refugees at full capacity for past year, waitlist stretched to nearly 800

In a windowless basement in Ottawa’s Centretown neighbourhood, Sheena Sherwood, a medical office assistant, gently reminds her trainee to stop saying the phrase “tell her” to the interpreter on the other end of the phone. She directs the trainee, instead, to speak to the interpreter as if she were speaking directly to the client.

The interpreter, Sherwood explained, translates every word they say.

Sherwood and her colleague are working the front desk at the Ottawa Newcomer Clinic, a multi-service health-care provider that serves government-assisted refugees — individuals who are referred to Canada for resettlement by the United Nations Refugee Agency or another referral organization. The clinic provides those new to Canada with primary care, multicultural health navigation and trauma-informed mental health services.

The clinic has the capacity to serve 1,000 clients every year.

The clinic has been at capacity since American troops pulled out of Afghanistan in the summer of 2021, triggering nearly 700,000 Afghans to seek refuge elsewhere. The number of clients the clinic saw increased five-fold over August and September last year and it now has a waitlist of nearly 800 for an initial medical assessment.

‘We have been dealing with a lot of challenges because there are a number of non-refugees, Ottawa citizens and residents that are orphans in terms of permanent primary care.’

The clinic is intended to provide bridged primary care, meaning that once they help newcomers get settled, the clients are moved into permanent primary care in their communities within a year of arrival. Farouq Samim, the clinic’s manager, says in fact they have been providing primary care for their clients for up to three years because of the shortage of primary health-care providers in Ottawa and the rest of the province.

“We have been dealing with a lot of challenges because there are a number of non-refugees, Ottawa citizens and residents that are orphans in terms of permanent primary care,” said Samim.

A study led by Unity Health Toronto published last week in Annals of Family Medicine found that between March and September 2020, Ontario family doctors left the profession at nearly twice the rate they did before the COVID-19 pandemic. The loss of 385 doctors across the province during that time period meant that about 170,000 patients lost access to primary care. In March 2020, research showed that nearly 1.8 million Ontarians didn’t have a family doctor.

Without access to primary care, many Ontarians who would otherwise make an appointment with their family doctor, end up in the emergency room. Samim says that it costs the taxpayer 50 per cent more to treat someone in an emergency department than it would to treat them at the Ottawa Newcomer Clinic, even with the additional services, such as interpretation, that they offer their clients.

Dr. Doug Gruner says he has seen many newcomers with non-emergency health issues seeking care in emergency departments. That was what sparked his idea to open the clinic in 2008.

“Refugees did not have access to family doctors very easily — in fact back then, (it was) almost impossible,” said Gruner. “The idea really sprouted around a need for access, which unfortunately still exists now, but it’s much better than it used to be 15 to 20 years ago.”

While access to primary health care has improved, newcomers still face barriers that others in the province don’t encounter. Many health-care providers won’t see patients who are insured under the Interim Federal Health Program, which offers refugees access to services such as primary care, dentistry and optometry before they are enrolled in a provincial health insurance program, such as OHIP.

Gruner said he’s seen this take place primarily in walk-in clinics where patients are asked to pay $150 to see a doctor because the clinic won’t accept IFHP beneficiaries. Often, Gruner says, the clients pay because they don’t know any better or, they aren’t seen at all.

In order to see IFHP beneficiaries, providers must register with Medavie Blue Cross, a process that involves completing a three-page form available online. According to Gruner, this sometimes involves verifying information over the phone with an insurance agent.
“A lot of providers think that’s too much of a hassle so they choose not to register with Interim Federal Health,” said Gruner. “Which is, in my view, not an equitable approach and it’s not a good reflection on what we should really be doing here in Canada.”

This spurred the Ottawa Newcomer Clinic to create a list of providers who see clients on IFHP that they recommend to their clients.

The clinic has been at capacity since American troops pulled out of Afghanistan in the summer of 2021, triggering nearly 700,000 Afghans to flee the country and seek refuge elsewhere.

“There are a number of amazing dentists and optometrists that are providing service to our clients, which reduce the barriers significantly,” said Gruner.

It’s unlikely that the Ottawa Newcomer Clinic will be able to increase capacity until more health care providers and support staff can be hired and funding for the organization increases, an issue that is apparent across the health-care system in Ontario.

The clinic, however, remains committed to providing exceptional care for their existing clients, whether that’s through the resources provided or simply the way staff communicate with them over the phone.

Put it in Park: Ottawa's e-scooter rental program is wrapping up, some hope for good