2 weeks ago 0 1 min read
We use cookies to provide a personalized experience for our users. By continuing to browse this site, you give consent for cookies to be used.
Got it!
Home > News > Ottawa > Riverkeeper expands campaign to curb use of road salt in Ottawa 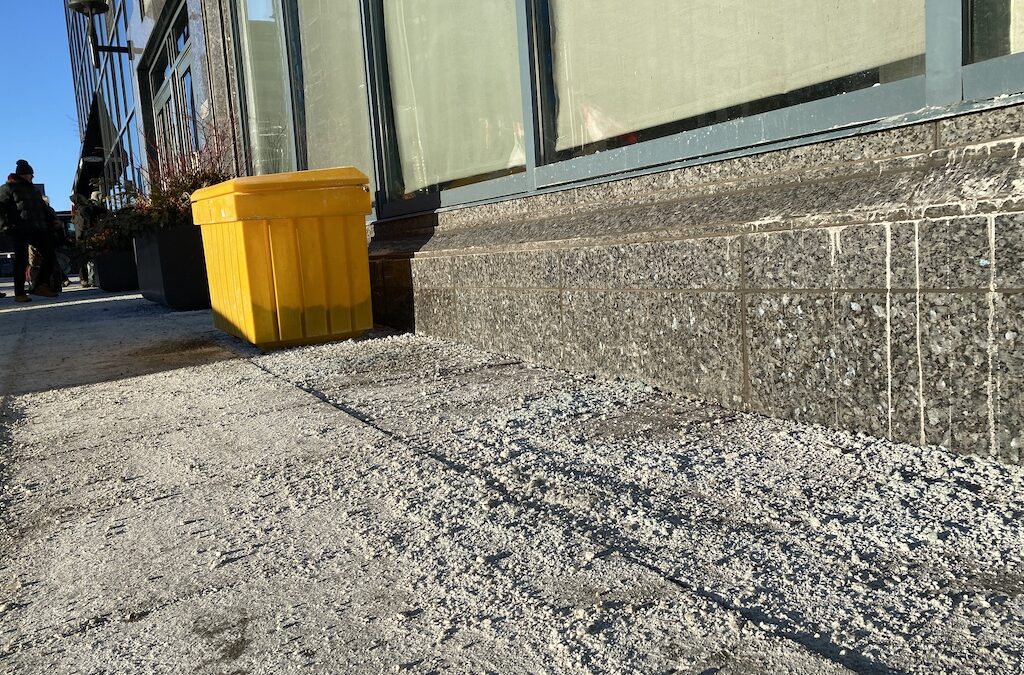 The Ottawa Riverkeeper is stepping up its battle against the overuse of road salt as a de-icer in the Ottawa watershed. Excessive use of salt on roads, driveways and sidewalks causes serious ecological damage. [Photo © Lauren Kerans]
Environment

Riverkeeper expands campaign to curb use of road salt in Ottawa

Ottawa Riverkeeper is expanding its campaign to cut the use of road salt in the capital and reduce its harmful impact on the aquatic environment.

The organization, which works to protect the Ottawa River watershed, is receiving funding this year from the Ontario government’s Great Lakes Action Fund to offer professional salt-reduction training to city contractors through the Milton, Ont.-based Smart About Salt Council.

“Limiting road salt is important, not just for the environment, but for keeping the infrastructure of our city in good shape,” said Matt Fyfe, a Riverkeeper scientist.

He said the program will provide tips on how to use road salt efficiently and effectively based on weather.

“Trainees receive information about the effectiveness of road salt in different weather conditions and temperatures and are presented with information about equipment calibration and distribution methods that ensure safety without oversalting,” a description of the project at the Riverkeeper website explains.

The organization is also expanding the number of sites in the region where monitoring of chloride levels is carried out by volunteers.

Other measures being implemented in the city have reduced some use of road salt in recent years. For example, Ottawa plows “pre-wet” their salt loads with calcium chloride, a process that helps reduce the use of salt by 20 per cent, said snowplow driver Greg Ciliberto.

“Limiting road salt is important, not just for the environment, but for keeping the infrastructure of our city in good shape.”

This process limits the use and expense of salt, and helps the salt work faster and more effectively at lower temperatures.

Ciliberto, who has worked for the city for more than 30 years, says the technology of the plows and the environmental awareness about the impact of road salt has come a long way in recent years. When Ciliberto began plowing roads for the city, plows were distributing a mixture consisting of 50 per cent salt and 50 per cent sand.

Today, plows are computer-programmed to distribute 90 per cent sand and 10 per cent salt.

Road salt has advantages: it can limit the formation of ice on roads, driveways and sidewalks, while providing some additional traction for vehicles and pedestrians crossing potentially slippery paths.

However, salt has serious impact on the environment. Road salt eventually drains into nearby waters, contaminating creeks, rivers, and lakes, and harming or killing marine life.

Road salt can also cause vehicles to rust, corrodes bridges and other infrastructure, damages the soil in gardens and even hurts the paws of pets.

Despite the negative consequences, limiting road salt use is not easy. Fyfe acknowledges some private plow operators often over-salt roads because they are trying to ensure they aren’t liable if accidents occur because of icy conditions.

About five million tonnes of road salt is used in Canada each year, according to Statistics Canada. Ciliberto said the City of Ottawa uses about 165,000 tonnes annually. With each tonne costing around $85, the city spends about $14 million annually on road salt.

Ciliberto said the city is always looking for alternatives that could benefit the environment if they are proven to be effective in keeping roads safe.

Fyfe said limiting the use of road salt isn’t just essential for the capital region’s municipal governments, but also the responsibility of private businesses and residents.

Still, Fyfe said he’s happy to see proactive steps being taken by the City of Ottawa to help reduce the use of road salt.

Other environmental organizations in Ottawa are encouraging residents to take steps to reduce salt use.

Vita Sgardello, communications and marketing manager at Envirocentre, said a lot of people overestimate how much salt they need when only about one cup of salt is enough to clear a six-metre-long driveway.

The Envirocentre, which describes its mission as providing “people, communities, and organizations with practical solutions to lighten their environmental impact in lasting ways,” also suggests leaving a small layer of snow on your driveway — about two or three centimetres deep — as this will help prevent the formation of ice while providing better traction than bare asphalt.

Sgardello said she’s pleased to hear more people are becoming aware of the fact that using salt as a de-icer is an environmental issue and realizing that there are alternatives. Some of these alternatives include cat litter, sand, coffee grounds, or even a straw-and-sand mixture.

“The environment is important, but it’s also really important to make sure that people are safe,” said Sgardello, noting that using alternatives to road salt is an effective way to accomplish both goals.