6 days ago 0 3 min read
We use cookies to provide a personalized experience for our users. By continuing to browse this site, you give consent for cookies to be used.
Got it!
Home > News > Transit > Six months after LRT launches, Ottawa rolling out solutions to noise complaints 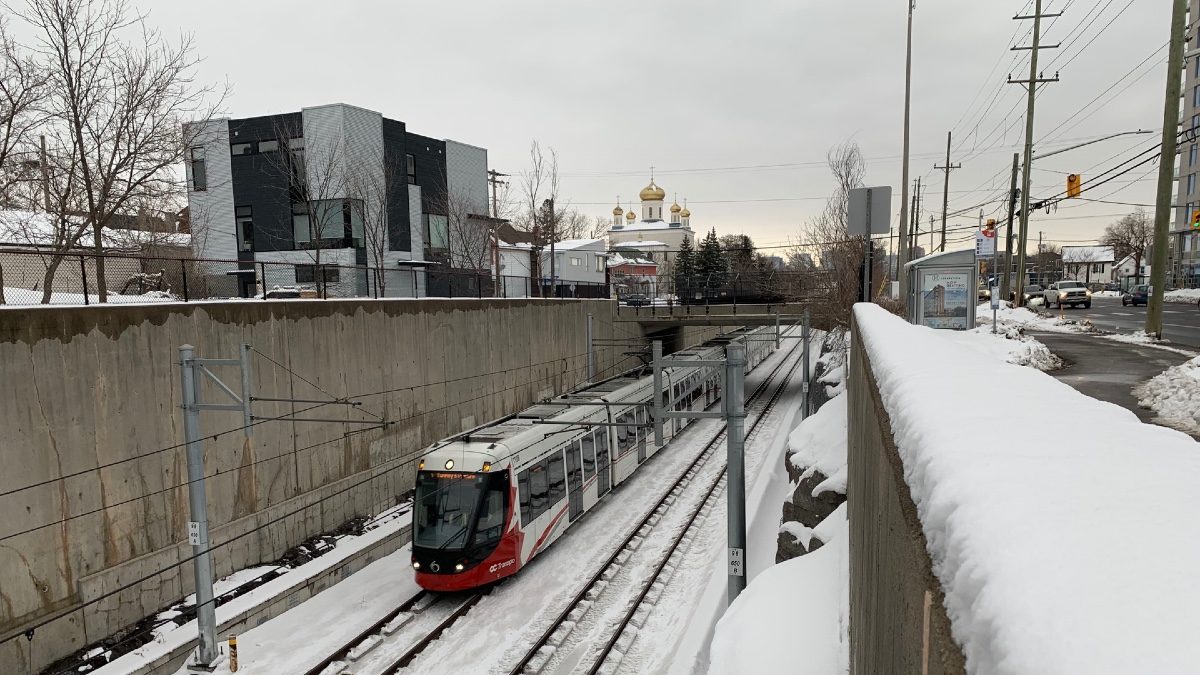 A train passes through a trench in the Mechanicsville neighbourhood in Ottawa. Residents have complained that the trench amplifies the noise from the train to a disruptive level. [Photo © Kevin Martine]
News

The City of Ottawa has said it would install noise dampeners before the end of March along the LRT in the city’s west end, after months of complaints from residents about the loudness of the new Confederation Line — a sound some have compared to a passing jetliner.

“If you are on your balcony you cannot carry on a conversation with anyone during the pass. You cannot hear one another,” said Jane Taylor, a local resident who lives within earshot of the LRT tracks near Tunney’s Pasture.

In Mechanicsville, between Bayview and Tunney’s Pasture stations, the LRT runs through an open air trench below ground level, along which the bus-only transitway used to run. This means that, unlike along other stretches of the Confederation Line that run aboveground, the sound in Mechanicsville is directed upwards towards nearby residential areas.

“Usually LRT does not make such noise levels. Because they are in a trench, the two retaining walls will actually amplify the noise,” said Ramani Ramakrishnan, a professor of acoustics and noise control at Ryerson University.

Taylor lives on the ninth floor of an apartment building near Tunney’s Pasture. She says the noise increases with every floor.

Ramakrishnan also said the process the city used to assess the noise level might be flawed. “They use the average noise level over a 16-hour period.” This means that the high-volume noises from trains passing by regularly were diluted by the quieter stretches between trains in the assessment. The average volume might fall within reasonable noise limits, but not the peaks.

The situation has upset local residents, who complain they can no longer leave windows open.

“To me it was just such a big boondoggle on a very expensive project for a train going through an urban area, when the houses are so close to the railway,” said Lorrie Marlow, president of the Mechanicsville Neighbourhood Association, a group which wrote a letter complaining to the city about the noise last fall.

Marlow said noise mitigation should have been part of the initial construction and that Ottawa should have consulted with other cities to develop a noise-control plan.

“It’s not like this was the first urban train. I can’t believe they wouldn’t consult Toronto and other places about impacts to their residents from a railway,” she said.

The dampeners are to be attached to the rails and are designed to absorb vibration created as trains pass over them.

If the noise dampeners do not work, Marlow said the city should consider further steps, such as adding gravel to the sides of the trench, or covering the trench with a plexiglas roof to keep sound from escaping.

Kitchissippi Coun. Jeff Leiper said he is working with city staff to find a solution, and that the new dampeners should help.

“The current noise level is unacceptable. We were told during the planning phase of the LRT that it was going to be quiet,” he said.

The city has already tried to fix the problem before, by grinding the rails to make the track smoother, so that they vibrate less when a train uses them. That reduced the noise somewhat, but not enough to satisfy residents.

Some residents say that while the noise is irksome, the city has bigger LRT problems to deal with.

“Knowing that they’ve got everything else to deal with, it seems almost petty to me to be making a big issue of the sound when they’ve got all these larger problems to deal with,” said local resident Dickson Davidson.

The issue potentially affects not only residents in Mechanicsville and neighbouring Hintonburg, but residents throughout the west end, since the next phase of LRT plans would extend the LRT further along the trench into Westboro.

“I hope that whatever they do come up with to mitigate the sound will be effective as they extend it further down the trench,” said Davidson.

But the noise of the LRT is not just annoying. Its effects transcend the boundaries of ruining your mood, said Justin Munger, a master’s student in the department of musicology at the University of Ottawa.

“There are some pretty well documented impacts on people’s health in regards to noise pollution,” Munger said. “The World Health Organization has some pretty well established guidelines on the accessibility of various levels of noise. There are studies linked to cardiovascular disease, diabetes, increased releases of cortisol, the stress hormone, and the various biological impacts on people’s bodies.”

Leiper says that lessons have been learned from the noise problems. He said the city has modified the contracts for the second phase of LRT construction to mandate applying noise dampeners, and that the new dampeners will be installed soon.

“So at this point, we expect the installation to begin the third week of March and it will take approximately two to three weeks to complete. They’ll do the work at night so they don’t impact service.”