2 days ago 0 4 min read
We use cookies to provide a personalized experience for our users. By continuing to browse this site, you give consent for cookies to be used.
Got it!
Home > News > Transit > Students, businesses bracing for O-Train closure in May 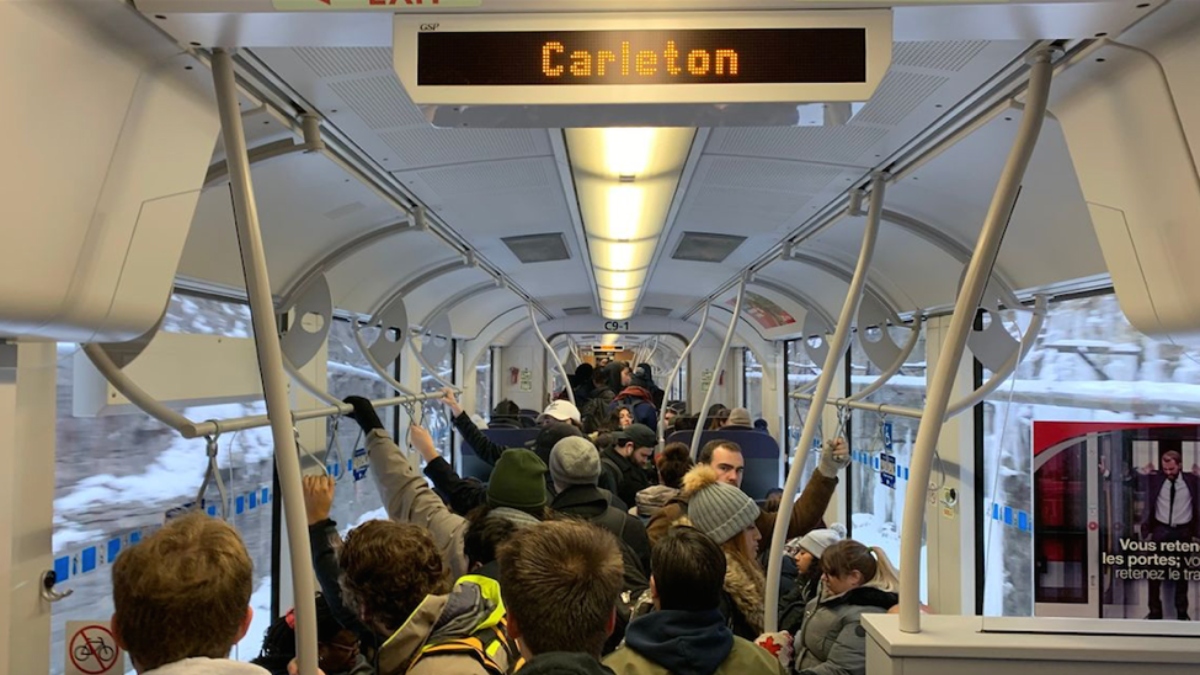 A typically crowded O-Train car en route to Carleton University from Bayview. This busy transit line will be shut down for more than two years, starting May 2020. [Photo @ Hana Sabah]
Ottawa

O-Train Trillium Line’s planned closure this spring is expected to disrupt businesses and the daily lives of many local residents — including thousands of Carleton University students, staff and faculty — who rely on the transit line.

Envie, a popular Little Italy rental apartment for Carleton University students because of its proximity to the Carling O-Train station – is trying to ensure residents continue to have an efficient commute after the O-Train is shut down in May 2020.

Envie’s general manager, Curtis Murphy, said he has been lobbying OC Transpo for bus service that can offer comparable convenience to his tenants.

Murphy lamented that the O-Train’s closure was initially expected to last only six months. It’s been extended to more than two years.

Since that bad news was announced, Curtis said he’s been in contact with OC Transpo general manager, John Manconi, to try to guarantee his residents are provided with the same kind of commute they’ve become used to.

“We’re going to come up with a plan to ensure that our residents are covered …  and I’m going to make sure we bring down that transit time as close as possible to the O-Train,” said Murphy.

He added that there are numerous other buildings opening in the area to serve off-campus students, so a lot of people in Little Italy will be affected by the O-Train closure.

“We understand it’s a very important aspect as to why they live in our building,” he said.

Murphy said he plans to push for more buses with more frequent runs —  especially during peak times — so that Envie residents continue to have convenient access to Carleton and the rest of the city.

Despite the problems that have plagued the new LRT Confederation Line since September, residents of Ottawa have been using the new transit service heavily, with just more than three million rides recorded in the first month of operation.

The introduction of the LRT is the first three phases in the creation of a light-rail system in Canada’s capital. The city is already working on the planned expansion of the O-Train Line farther south and the Confederation Line farther east and west. Ottawa Mayor Jim Watson recently tweeted a photo celebrating the launch of the Stage 2 expansion project.

The O-Train expansion will include a station at the Ottawa International Airport. More stations will be added along the already-built rail as well as on the extended line. These include stops at Gladstone, Walkley and South Keys.

The complexity of work extending the line is the reason for the two-year shutdown of the line. The project will be overseen by Manconi, who has been under fire recently because of the problems plaguing the LRT.

Businesses relying on commuters along the O-Train route are expressing some concerns about the impact of the planned closure.

Many Carleton students shop at South Keys Shopping Centre, and Bryson Fournier — supervisor at the Bulk Barn store there — said “a lot of students living in Carleton use the O-Train to get here.”

Despite the bus service that will replace the O-Train, Fournier said it won’t be as reliable as the quick commute the O-Train provided.

“Students will be reluctant to wait for a bus in between classes to come here,” he predicted.

The manager of the shopping centre’s Starbucks outlet, Gabbie Hannah, said the flow of customers from Carleton is typically a “hit or miss.” Hannah said some Carleton students will likely remain dedicated customers despite the longer travel time.

“I don’t think the impact will be extravagant, but it will definitely be there for sure,” she said.

On the positive side, the expanded O-Train line will include a stop right at South Keys instead of just short of the shopping centre at Greenboro.

Carleton student Brendon Arbuckle said he expects the O-Train closure is going to add an extra hour to his daily commute to and from the university. Arbuckle owns a car and drives to a park-and-ride before taking the rail link to Carleton.

Arbuckle said he’s now thinking about buying a parking pass at Carleton and having to spend more on gas to get to university.

“I’m pretty unhappy about it,” he said. “It’s really easy to get to and from school with the O-Train, and now it’s going to make things a lot more difficult.”

“The work being done is important … but it is a real inconvenience, and we would rather there would be a way to do this work without having such an extended shut down,” McLeod said.

He added that Menard voted against the contract to extend the O-Train based on several concerns.

“We haven’t had the chance to learn from Stage 1 yet,” he said, referring to the problem-plagued launch of the LRT Confederation line. “It is disappointing that we can’t benefit from these lessons before starting the contract for Stage 2.”

McLeod said Menard is also working with OC Transpo to ensure there is more transparency with the progress of Stage 2.

“We clearly didn’t know what was going on (with the LRT), because we just got blindsided with all the delays.”

He also said with better preparation, OC Transpo should be able to accommodate citizens with the most efficient alternate bus routes to replace the suspended rail service.