4 days ago 0 8 min read
We use cookies to provide a personalized experience for our users. By continuing to browse this site, you give consent for cookies to be used.
Got it!
Home > News > Ottawa > Talking trash: Ottawa looking for feedback on curbside garbage collection in online survey 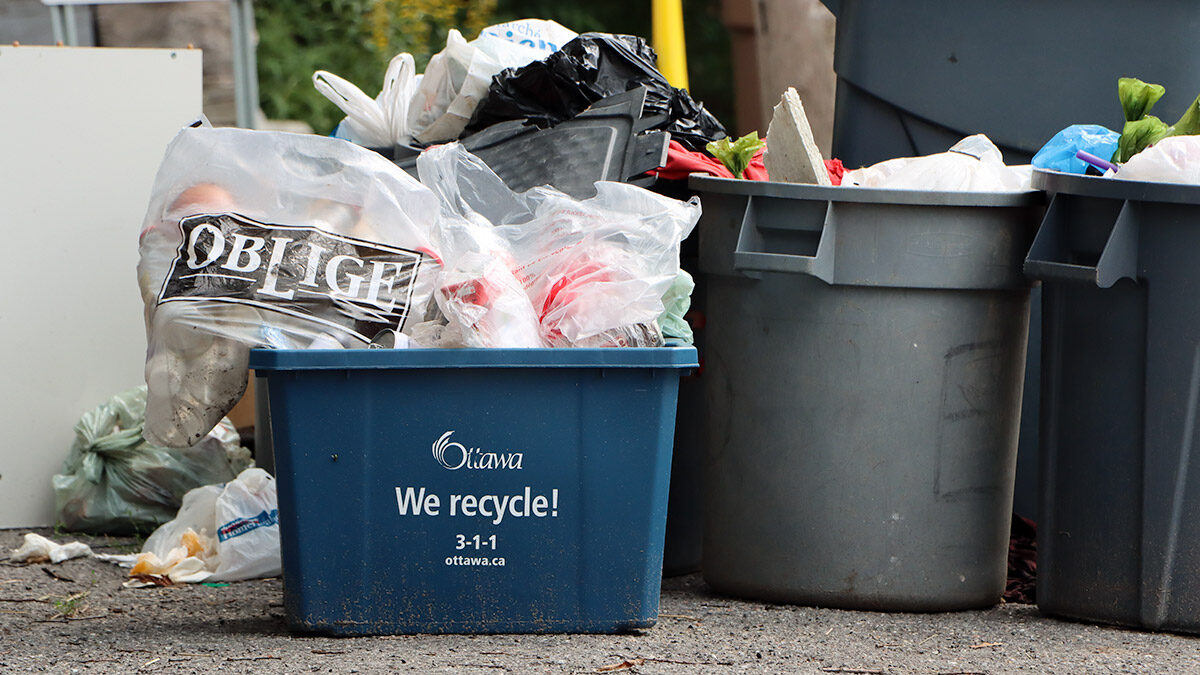 Currently, Ottawa residents are permitted to put out six garbage bags or items every two weeks, in addition to their green bin and recycling bins. [Photo © Ariel Harker]
Environment

With the announcement that Ottawa’s Trail Road landfill is expected to reach capacity between 2036 and 2038, the city is looking for ways to divert more trash from the dump and asking residents for ideas.

Citizens can fill out a survey about three options for curbside garbage collection: partial pay-as-you-throw (PAYT), reduced item limits, and clear garbage bags with recycling and organics bans. People have until Sept. 12 to comment.

The survey is the most recent step in the development of the city’s Solid Waste Master Plan, set to be completed in 2023. The plan will guide how Ottawa manages waste over the next 30 years. City council approved the plan’s guiding principles and goals in June.

Ideally, the city should implement all three options, said Duncan Bury, one of the founders of Waste Watch Ottawa.

“I think the user-pay idea has got to be a key part of the city’s waste plan going forward,” he said. “If we don’t do that, then I think we’ve wasted a lot of time and effort.”

Waste Watch Ottawa is pleased the city is looking at trash diversion options to try to avoid having to find and pay for a new landfill, Bury said – which could cost hundreds of millions of dollars.

Reducing trash by recycling is a practical and personal way for people to do something to help the environment, said Bury.

“That’s the incentive,” he said. “But I think we’re at the point now that we need to start thinking about backing that up with more restrictions.”

That means residents need to take more responsibility at the curbside for how they dispose of waste, said Bury.

“We need to start thinking of waste, not as a ‘free public service,’ but as more like a utility, where you basically pay based on the level of service you get,” said Bury.

“At the end of the day, as a community, we all have to collectively be willing to make changes to help achieve them,” said Nichole Hoover-Bienasz, the city’s program manager for solid waste services long term planning. “It’s really important to understand from residents’ perspectives what some of the barriers may be for households to make some of those changes.”

The survey already has 5,000 responses from people across Ottawa, said Hoover-Bienasz.

While city staff has been mainly looking for feedback through the online survey, or in upcoming engagement sessions this August and September, they are also taking note of social media comments.

A Reddit post by Counc. Shawn Menard regarding the waste survey garnered more than 500 comments about the three options and other trash issues in Ottawa.

“Our team has been going through that Reddit thread in particular, and we do a lot of social media monitoring as well,” said Hoover-Bienasz. “There’s been a lot of great discussion on other topics that are to come as part of further engagement later this fall and other options we’re considering in the master plan.”

Planning for Ottawa’s waste disposal can be challenging, said Hoover-Bienasz. There are different factors to consider such as the differences between urban, suburban and rural areas; household makeup and size; standalone versus stacked houses; driveway length; cultural considerations and mobility constraints.

The current survey is only for curbside garbage pickup. Planning for larger multi-unit residences will be tackled later this fall, said Hoover-Bienasz.

One worry raised on social media was that bag limits or bag tags could be a concern for low-income households or large families.

“That’s the important insight that we want to hear, because there are opportunities for us to consider supplementary programs,” said Hoover-Bienasz.

For example, extra free bag tags could be provided to large families with young children in diapers, who have limited control over the amount of trash they produce.

Illegal dumping is already an issue in Ottawa, said Hoover-Bienasz. Trash gets left in urban parks and in rural ditches. A key consideration for implementing bag limits or tags is the risk of more garbage being disposed of irresponsibly.

“You typically see any increase in illegal dumping, especially within that first three to six months, as residents begin to adjust to the program,” she said.

The key is education and outreach to ensure people are informed about any changes, said Hoover-Bienasz.

While there may be a grace period, enforcement will also be necessary. If there is illegal dumping, an enforcement officer will go through the trash to find identifying information and follow up, said Hoover-Bienasz, resulting in a warning or fines.

To employ a PAYT system in Ottawa, there must be a system for purchasing and distributing tags. That’s one thing survey feedback could help shape, said Hoover-Bienasz.

“We’re trying to make it as convenient as possible in those locations that residents are already visiting on a regular basis,” she said.

Potential solutions could include partnerships with local retailers, having tags available at community hubs like libraries and community centres, or buying tags online and mailing them to a household.

In general, if people are provided with easy alternatives to traditional curbside garbage pickup, they’ll do the right thing, said Bury.

“This is not a new idea at all. It has been made to work. Once people adjust, it works,” he said.