2 days ago 0 4 min read
We use cookies to provide a personalized experience for our users. By continuing to browse this site, you give consent for cookies to be used.
Got it!
Home > Politics > Trudeau delivers virtual message to the graduating class of 2020 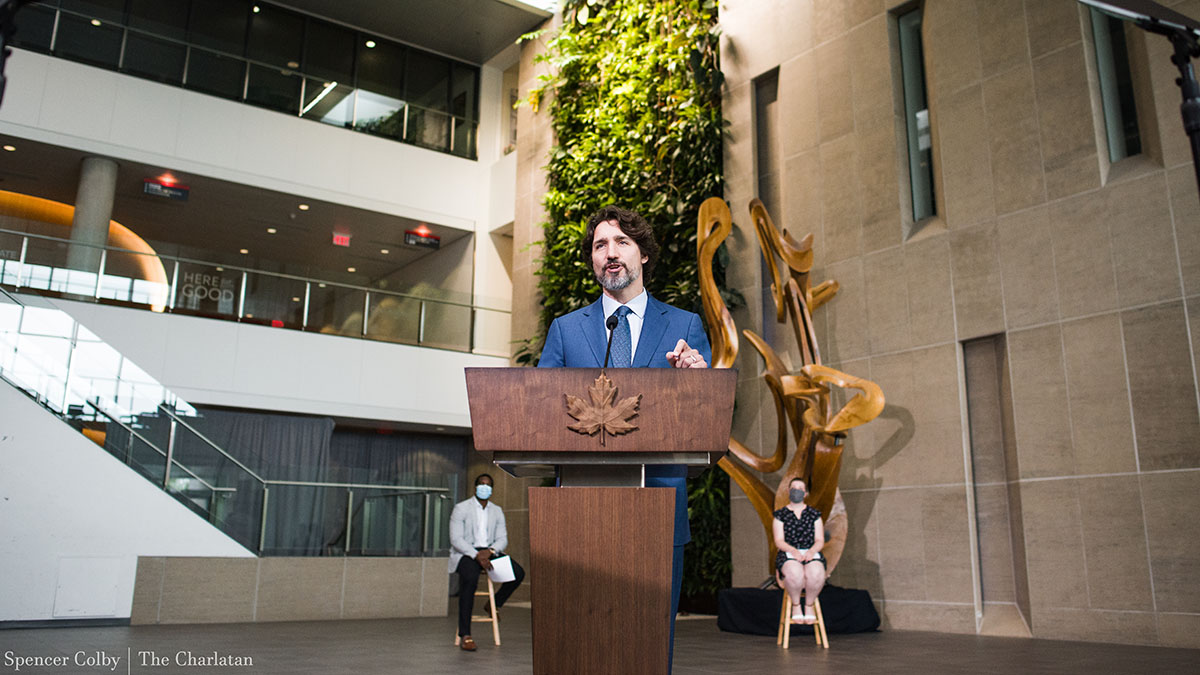 Prime Minister Justin Trudeau gave a special convocation speech to all graduating members of the class of 2020 during a ceremony at Carleton University on Wednesday. [Photo © Spencer Colby]
Education

Despite being denied the traditional ceremony when graduating students get to celebrate their achievements — crossing a stage in cap and gown, receiving hard-won degrees and diplomas — the Class of 2020 received a special message from Justin Trudeau Wednesday morning.

The prime minister appeared at a special ceremony held in Carleton University’s Richcraft Hall, where he gave an extraordinary convocation address in front of bright lights and cameras that streamed his words to national news networks and his own Facebook page.

“You should be celebrating with your friends, taking pictures in your gowns,” said Trudeau, acknowledging the unusual circumstances brought about by the global COVID-19 pandemic. “But this year is different. You are different.”

He went on to list major milestones that have marked the Class of 2020’s path to graduation, from climate action marches in September, to the #MeToo movement, to events that pushed his own government to pursue stronger measures towards reconciliation with Canada’s Indigenous peoples, and the recent Black Lives Matter protests in Canada and around the world.

“Make no mistake, getting a degree is a momentous achievement — but you never needed a piece of paper to call up injustice. You didn’t wait for this day to demand change, to create change,” Trudeau said.

To help personalize the celebratory message sent to hundreds of thousands of students across the country, the Prime Minister’s Office invited four graduating students to speak. The students were Jordan Gray from Carleton, Lana El Sanyoura from the University of Toronto, Emmie Ouellet from Université Laval and Caleb Adedze from Ottawa’s Collège la Cité.

The broadcast started a few minutes late because some who were present — including the four graduates — were without the protective face masks recommended by the World Health Organization to reduce the spread of COVID-19.

Masks were quickly supplied. Then, standing at a podium distanced from the others assembled, each student had a chance to deliver a brief speech — in English or French, without their face covering. The speeches began with Lana El Sanyoura.

“We need to embrace change and seek challenge. Nothing worth having comes easy,” she said.

She was followed by Gray, who emphasized the hardships of diverse students.

“It is not always easy to succeed when discretion within the academy and beyond favours those who are not Black, not Indigenous, and not people of colour,” said Gray. “Yesterday’s funeral of George Floyd is a reminder to Canada that the racism that manifested in George Floyd’s killing is often structurally supported by our own institutions.”

After the briefing, Gray said he felt the moment was a true capstone for university education.

“As a person of colour,” he said, “it was perhaps one of the greatest opportunities I could have to talk about all of the things that I have been researching and talking about the last four years.”

Yaprak Baltacioğlu, Carleton’s chancellor and a former senior federal bureaucrat, said it was an honour for the university to host the event even if it wasn’t a typical graduation ceremony.

“It was a heartbreak for me, personally, that I didn’t get to shake the hands of all our students graduating,” said Baltacioğlu. “At the same time, I felt so happy for the graduates that they actually got a commencement speech from the Prime Minister of Canada.”

After student speeches in French and English, Trudeau spoke separately with the four students and their families and thanked Baltacioğlu for hosting the event.

“I trust,” Trudeau said of the Class of 2020, “that you will be the 21st century’s greatest generation.”

Rock climbing during COVID: If you boogie in Calabogie, follow the rules