2 weeks ago 0 1 min read
We use cookies to provide a personalized experience for our users. By continuing to browse this site, you give consent for cookies to be used.
Got it!
Home > News > Ottawa > ‘What can I leave behind for generations to follow me?’ Algonquin mural unveiled at New Edinburgh Park 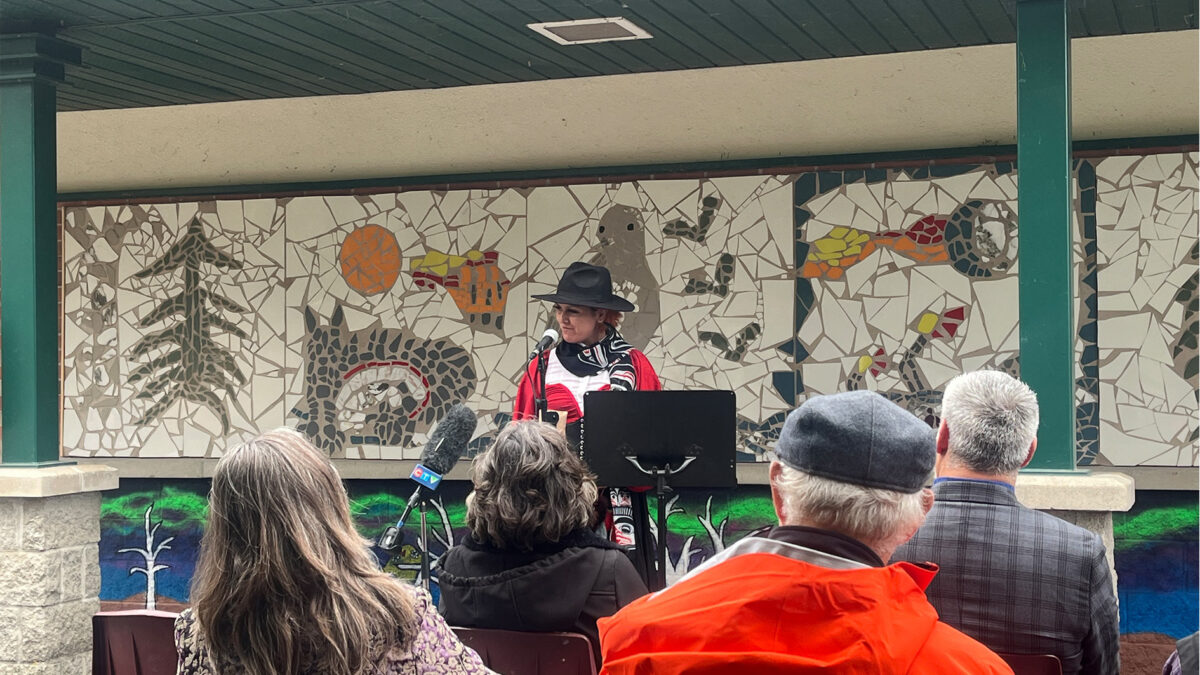 The unveiling of an Algonquin mural at a park in New Edinburgh paid tribute to Ottawa-area Indigenous communities ahead of this year's National Day for Truth and Reconciliation. [Photo © Ashley Hermalin]
Arts & Culture

‘What can I leave behind for generations to follow me?’ Algonquin mural unveiled at New Edinburgh Park

A new Algonquin mural now on view at New Edinburgh Park Field House is the first Indigenous artwork to be permanently displayed in public in the New Edinburgh and Rockcliffe neighbourhoods.

The use of traditional Indigenous names as part of the display was also a first for the area, according to organizers of the mural that pays special tribute to Ottawa-area Indigenous communities. It was unveiled Sept. 28, just ahead of this year’s National Day for Truth and Reconciliation.

About 50 people witnessed the unveiling and to honour the legacy of 19th-century Algonquin Chief Constant Penesi in the naming of a historical portage trail between the Ottawa and Rideau rivers. Among those in attendance was Chief Wendy Jocko, a direct descendant of Chief Pinesi, of Algonquins of Pikwakanagan First Nation near Renfrew.

“We are one heart and one soul, and have lived for thousands of years on this unsurrendered territory,” said Chief Jocko. “We are honoured to join you here today for the inauguration of the Chief Pinesi portage trail project mural and signs.”

Each speaker received a bag of tobacco as they were introduced.

“I’m really pleased to see young people here,” said Lucille Collard, Ottawa-Vanier MPP, referring to a group of elementary school students from St. Brigid Catholic School who were attending as part of a field trip from a few blocks away on Springfield Road.

Algonquin Elder Doug Comegan performed a pipe ceremony prior to the event. As microphones were set up and people arrived, he prayed.

When the crowd had assembled, Comegan spoke of the challenges faced by Indigenous people, including the survival of their languages: “Throughout history, a lot of us lost a lot of gifts; that wasn’t our fault, but now we’re doing our best to assure these gifts.”

Though at times lost for words, near the end of his remarks, he said: “What can I leave behind for generations to follow me?”

That is the hope for the mural at the centre of the ceremony.

Doreen and Charlotte Stevens created the mural. Doreen, the elder of the mother-daughter duo, is a student at the Centre for Indigenous Theatre in Toronto and an artist from Kitigan Zibi Anishinabeg near Maniwaki, Que., 100 kilometres north of Ottawa.

Entitled “Miskwi” or “Bloodline,” the mural commemorates various aspects of Indigenous life. Made up of mixed media, the artwork features five ceramic panels made by Doreen, each telling a different part of a larger story, with a painted element underneath done by Charlotte.

“Our stories are very important. The history of our ancestors, our lineage, is very important, so we can tell them by the connection through the heart,” Doreen said. The work, she said, represents the beating heart of Algonquin life and culture.

“As I put a pattern here of tree flowers, to me it represents society, the connection, and the historical records of our ancestral lineage, our history, our culture, our heritage,” she said.

Charlotte said the painting explores the connection between “native culture and the four directions,” as well as “the four stages of life.”

The Chief Pinesi project aims to revive knowledge of historical trails used by Indigenous people in the Ottawa area for thousands of years.

The trail between Rockcliffe and New Edinburgh was part of a network, said Jocko, “which north and south brought goods and people along the Rideau River here from the Gulf of Mexico to the northern tip of Labrador, and east and west between the Atlantic and the Pacific.”

The mural includes the traditional names of families that been prohibited by successive French and British colonial regimes. In a way, the unveiling of the artwork symbolizes the recovery of those names.