3 weeks ago 0 4 min read
We use cookies to provide a personalized experience for our users. By continuing to browse this site, you give consent for cookies to be used.
Got it!
Home > News > Ottawa > With a twist: Ottawa group breathes life into local Rubik’s cube community 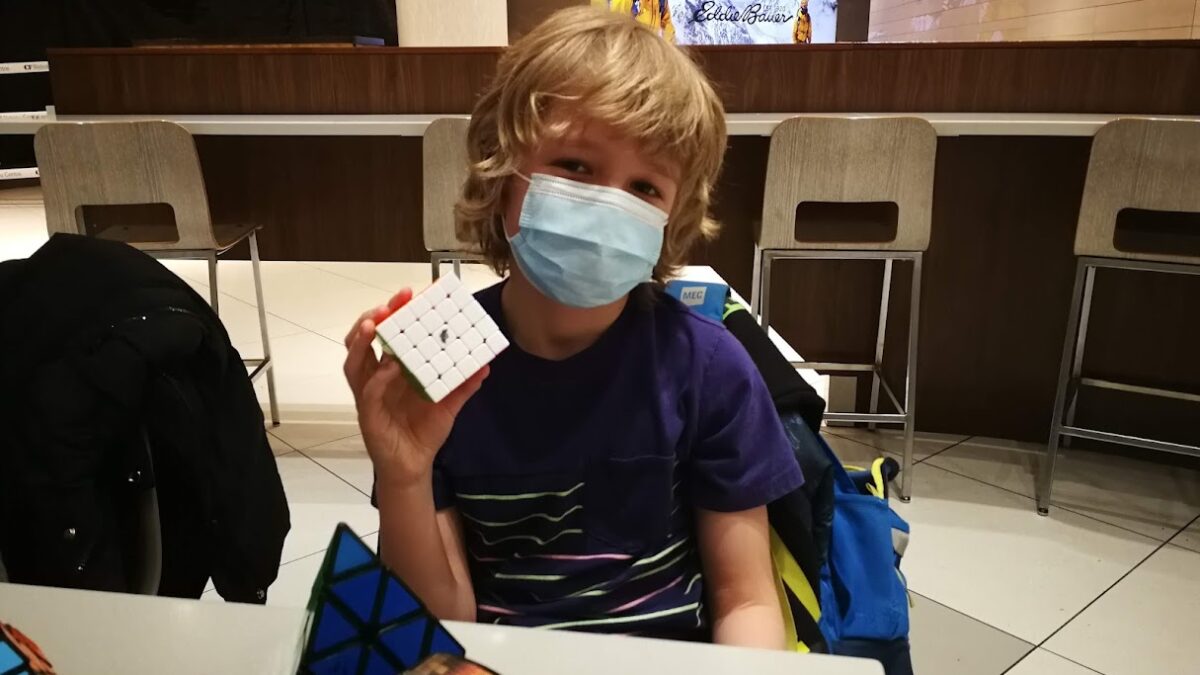 Reid Robblee holds one of his favourite Rubik's cubes, a 5-by-5, at an Ottawa Cubing meetup. [Photo © Austina Yu]
Community

Since eight-year-old Reid Robblee started solving Rubik’s cubes half a year ago, he has become so invested that his mother has to tell him to put them away at the dinner table.

“If it was up to him, I think he would be cubing all the time,” says Alicia Robblee. “He got some money for his birthday, and that’s all he wants to spend his money on — more cubes.”

Reid learned to solve Rubik’s cubes on Youtube and he is eager to attend a competition in Ottawa.

“I’m excited to meet new cubers and everything like that,” he says. “It’s just so fun. It also makes it so you can get challenged by people.”

The only problem? In-person Rubik’s cube competitions have been hard to come by during the pandemic.

That’s changing as Ottawa now has an organization dedicated to the colourful plastic puzzle block.

Antoine Cantin, the founder of Ottawa Cubing, says that he started his organization in December to bring the Rubik’s cube community in the city together.

The group had a few meetings in December, but it had to suspend in-person gatherings because of increased COVID restrictions in January. Then, the convoy protest shut down the Rideau Centre for another month, meaning that the club did not resume in-person meetings until March.

These difficulties are a microcosm of the challenges the Rubik’s cube community has faced during the pandemic.

Cantin says he was “very active” in the Rubik’s cube community when he went to high school in Rockland, 40 kilometres east of downtown Ottawa. He has been solving Rubik’s cubes for 13 years, since he was 10 years old.

“I had a club at my high school and we organized competitions every single year in Rockland,” he said. “We’d have competitions there from 2011 to 2019, but then we stopped with COVID.”

The Rubik’s cube was designed by Hungarian inventor Ernő Rubik in 1974. Each face of the cube is split up into nine squares and the goal of solving the puzzle is to return it to the state where each side only has one colour.

The puzzle grew in popularity through the late ’70s into the ’80s. In 1982, the first major Rubik’s cube competition took place in Budapest, Hungary.

The Internet has revived interest in the Rubik’s cube and given more people access to tutorials and opportunities to connect with other enthusiasts. Notable examples include the Yahoo Speedsolving Rubik’s Cube Group and speedcubing.com, both launched in 2000.

The World Rubik’s Games Championship 2003, held in Toronto, was the first major competition since 1982. The World Cube Association grew out of discussions in the Yahoo group and established official regulations for competitions in 2004. Since then, the competitive Rubik’s cube solving community has continued to grow worldwide.

What started with Rubik’s cubes has expanded into a broad category known as “twisty puzzles.” The WCA recognizes 17 puzzles of different shapes and sizes. There are also variations on solving the original 3-by-3 puzzle such as blindfolded and one-handed. Cubing technology has expanded to puzzles with magnets, and even smart cubes that connect to the internet.

Reid Robblee’s interest in attending a competition led his family to discover the Ottawa Cubing website and bring him to a meetup in March.

Reid’s enthusiasm for the cub impresses Winifred Motika, his grandmother. “I’ve watched Reid do this cubing … and he’s so good at it,” Motika says. “I said to my daughter each time he solves a cube for me, ‘Gee, there’s somewhere we need to take him where he can be with other cubers.’”

Cantin says in-person events were an important reason that many people stayed engaged in the hobby.

“At those events, they can see their friends which they made through cubing, and then they kind of build up a community,” he says. “If there’s no events for two years, there’s some damage that’s done to the community.”

“People that solve Rubik’s cubes are usually pretty passionate about it, and so usually they would be very happy to talk to you, help you improve, and then they’re going to help you become part of that community.”

At the same time, Cantin says that many people have learned to solve the Rubik’s cube while looking for pastimes during the pandemic.

Cantin has moved away from Ottawa, but he says he plans to continue organizing events from afar.

“I’m hoping that it can continue to grow, and then eventually we’ll be able to have regular competitions.”

Cantin encourages anyone who is interested in Rubik’s cubes not to be too intimidated to start solving.

“People that solve Rubik’s cubes are usually pretty passionate about it, and so usually they would be very happy to talk to you, help you improve, and then they’re going to help you become part of that community.”

The battles of Hog's Back Park: A look into the world of live-action role play

Fighting Islamophobia: Ottawa Centre MPP says it's time for non-Muslims to step up