By Liam Harrap | Little is known overall about native bee population levels and distribution in Canada.

Concern still looms over effects of the minimum wa...

By Lia Pizarro | Ontario's minimum wage increase continues to stir public debate over the benefits and challenges for businesses.

City of Ottawa arranges task force in case of spri...

By Rielly Riggs | The City of Ottawa has partnered with local organizations to create a task force, which is designed to help...

By Matthew Horwood | The plan would cover children from the age of two and a half to when they enter kindergarten.

The state of Canadian broadcasting: ‘The dec...

By Liam Fox | The new funding will have a primary focus on helping the province's youth.

"RT @CapitalCurrent: With almost a year of online learning behind us, post-secondary students and professors look back at its challenges and…"

The federal government announced Canada’s first National Housing Strategy Nov. 12, which will see an unprecedented $30 billion in funding targeted at ending homelessness over the next decade. According to the announcement, the funds will “reduce chronic homelessness by 50 per cent, remove 530,000 families from housing need, and build up to 100,000 new affordable homes.”

But while housing and homeless support experts in Ottawa agree that the strategy is a great first step, some worry about the planned allocation of funds to the provinces, cities, and programs. Others are concerned that despite the enormous increase in funding, there still isn’t enough money.

Elspeth McKay, executive director of Ottawa youth homelessness support program Operation Come Home, says that a tenth of the promised affordable housing units for the country would need to be allocated to Ottawa alone.

In order to make a real impact on homelessness in the city, “[The federal government] would need to make a large commitment at the beginning and build 10,000 units. That would just clear out the waiting list at the city’s Social Housing Registry,” McKay says.

Despite this, Carleton University professor and homelessness expert, Jacqueline Kennelly, cautions against jumping to conclusions until the specifics of the housing strategy become clear. “It still isn’t clear how the Canadian Mortgage and Housing Corporation will be distributing the affordable units across the country … but it sounds promising, and it certainly is better than we had a year ago when there was no national housing strategy.”

This is the default gallery type template, located in:
/home/capitalc/public_html/archive/capitalnews/wp-content/plugins/nextgen-gallery/products/photocrati_nextgen/modules/nextgen_gallery_display/templates/index.php.

If you're seeing this, it's because the gallery type you selected has not provided a template of it's own.

But, says Kennelly, there is no reason why other problems contributing to homelessness — outside of the strategy — can’t be attacked in the meantime.

Frances Daly, Manager of the Oshki Kizis Lodge for Indigenous women and children, wrote in an email interview that many of the barriers homeless Canadians face—such as employment issues, lack of education, addiction, and mental health problems—persist after ‘rehoming.’

She points out that things like food, furniture, cleaning supplies, and a functional phone, “make a huge difference in the likelihood that the placement will be successful,” in the long term, but are rarely accounted for.

A report by the Institute of Fiscal Studies and Democracy (IFSD) released days before the housing strategy announcement brings to light another issue that may contribute to homelessness in Ottawa. The report suggests that the federal funding each program receives from the city stays the same, regardless of whether that program reports good or bad annual results.

Alannah McBride, a 4th year economics student at the University of Ottawa, was one of the report’s authors. She and co-authors Kevin Page and Randall Bartlett spent weeks going through reports from homeless support services to the city, and hard data from Ottawa’s Housing First program, Sandy Hill Community Health Centre, and the Canadian Mental Health Association (see their findings here).

The IFSD is calling for more financial accountability between the levels of government, in hopes that funding can be reallocated to where it can do the most good for a summary of the report, click here.

“This is taxpayer money. It’s my money—your money,” says McBride. She worries that money is being wasted without anyone knowing. “We want to make sure that there’s accountability for that funding … because these are real people. They are going through real programs, and real problems. And if we can make it better for them, we should.”

When asked to comment, the City of Ottawa provided a statement saying that it, “values feedback from all stakeholders and looks forward to reviewing this report and the time frame it covers.”

David French, director of policy and planning with national anti-youth-homelessness coalition A Way Home, agrees that accountability is key — both to help gauge the scope of need, and to determine how much current efforts are actually helping.

In many cities, “the entities responsible for ending homelessness are not municipally-based; they’re not-for-profit organizations, and they are the ones who distill and deliver homelessness policy on behalf of the provincial or federal government,” French says. In others, official government agencies take charge. Across Canada, a hodgepodge of government- and non-government-run organizations at local, provincial and federal levels are collecting a variety of information about homelessness and housing need.

Instead, French advocates for harmonized data and reporting systems across all levels of government. “Data is the magic elixir for being able to truly measure current state homelessness and the impact that dollars and cents are having in those communities,” he says.

The IFSD study comes to a similar conclusion: information collection and sharing should be standardized to better track and respond to homelessness across Canada.

“It makes me nervous,” McBride says of the housing strategy’s implementation before systemic issues around data collection and accountability are handled. “If we don’t close that gap between funding and outcomes, and how those two relate, we could just be throwing a bunch of money out the window, money that could be really helping these people — getting them into housing, helping them with drug addiction, helping them with mental health issues, helping veterans, indigenous youth, all these different groups of people who might be missing out if we don’t close that gap.” 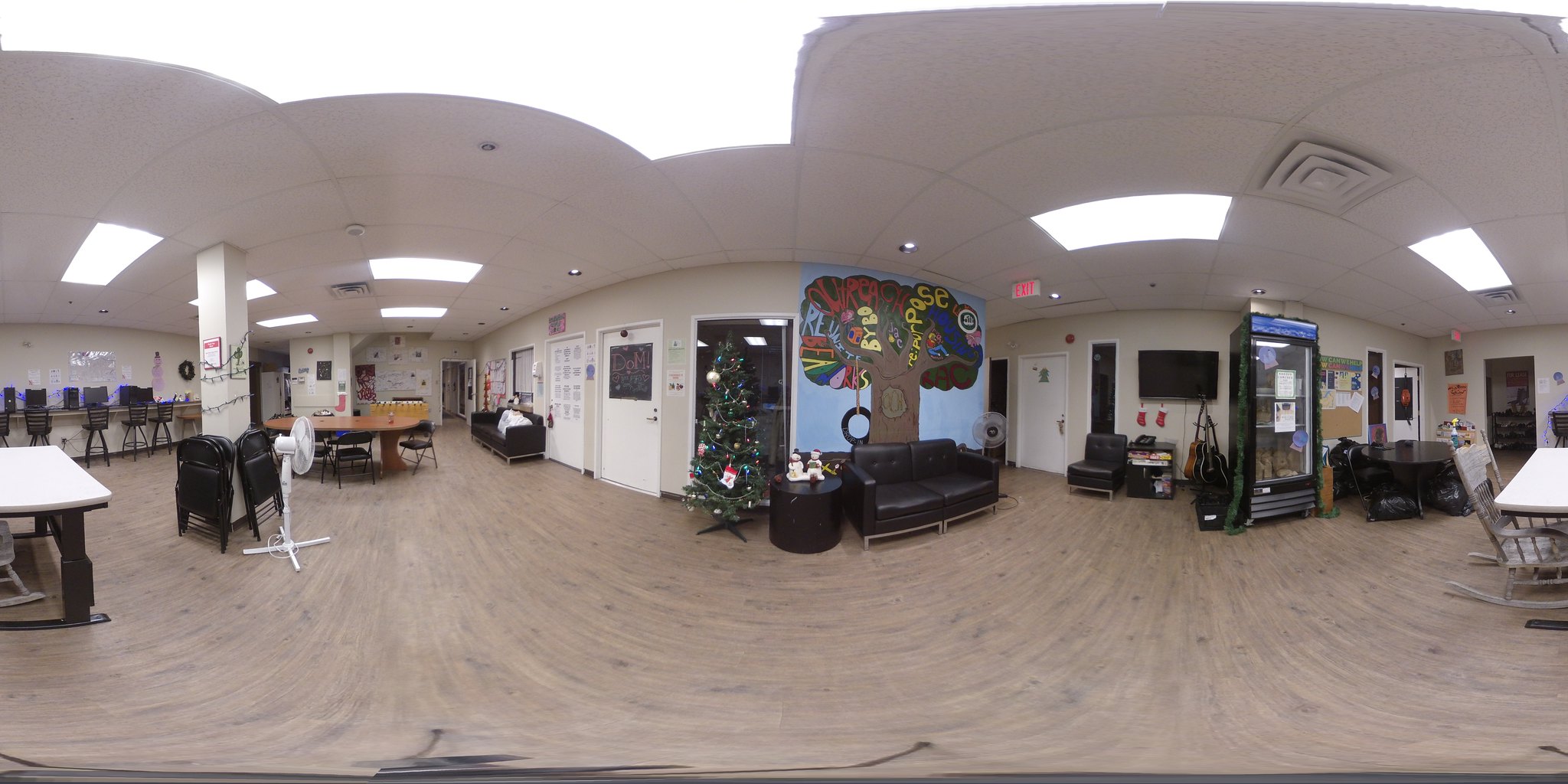 The interior of Operation Come Home, which provides employment, education and support for homeless youth over the age of 15. [Photo © Ryley White]

By Shauna McGinn | Is the plan to increase minimum wage a 'band-aid' solution or a...