1 week ago 0 5 min read
We use cookies to provide a personalized experience for our users. By continuing to browse this site, you give consent for cookies to be used.
Got it!
Home > News > Ottawa > Exhibit glimpses 150 years of Ottawa history through five sets of eyes 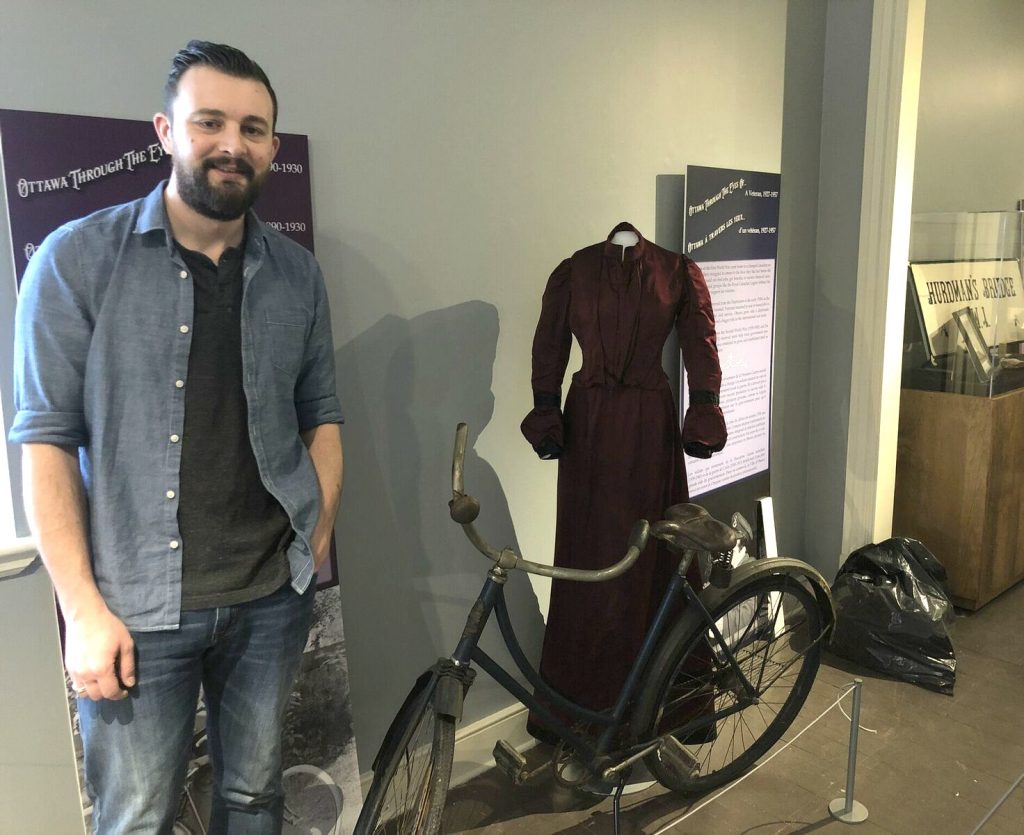 Grant Vogl of the Bytown Museum stands next to a bicycle in the new exhibit titled Through the Eyes of Community: 150 Years of Ottawa's History. The exhibit opened on April 13 and runs until Dec. 23.
Arts & Culture

This story first appeared in Centretown News on April 14, 2018

A new exhibit at the Bytown Museum will encourage Ottawa residents to examine the city’s history from five different vantage points: the perspective of a farmer, a woman, a veteran, a child and an immigrant.

The exhibit, titled Through the Eyes of Community: 150 Years of Ottawa’s History, explores the role of five different demographics in shaping Ottawa’s history between 1867 and 2017. Each of the five perspectives highlighted in the exhibit covers approximately 30 years of history using artifacts and information panels.

The exhibit opened on April 13 and runs until Dec. 23.

While parts of the exhibit were shown at City Hall and city-run museums during 2017, the Bytown Museum display will be the first time that all five modules will be showcased in the same place at the same time.

Grant Vogl, collections and exhibitions manager for the Bytown Museum, said the new exhibit’s approach to telling history from diverse viewpoints is what makes it unique.

“When people think of the history of Ottawa, it’s a pretty narrow focus in terms of identity,” said Vogl. “We have a lot of stories about British immigrants, Irish immigrants, the French presence, but this exhibit reaches beyond that and talks about different groups that are a part of the city now and shows the multiculturalism of Ottawa.”

Through the Eyes of Community was developed by the City of Ottawa, with funding from the federal Department of Canadian Heritage and the Museums Assistance Program. John Maker, an exhibition development research officer for the City of Ottawa, said the exhibit was created as part of last year’s Canada 150 celebrations.

“The 150 celebrations were all about Canada as a nation, and the various different events that happened on a national scale,” said Maker. “A lot of those events centre on decisions made in Ottawa, but our exhibition wanted to flip that on its head and look at what was going on in those 150 years in the local community of Ottawa.”

Ashley Stevens, an exhibition development researcher for the City of Ottawa, said the displays took three years to develop.

“One of the things that was really important was that we were representing this history of Ottawa from 1867 to 2017, so we really looked at the way that certain communities changed during that time,” said Stevens.

The farmer’s portion of the exhibit examines the rise of dairy production and the increase in urban markets as Ottawa’s population boomed between 1867 and 1900.

The women’s history section spans 1897 to 1930, covering the fight for the vote. It also highlights women’s growing independence outside the home, including the founding of the Bytown Museum itself by the Women’s Canadian Historical Society of Ottawa in 1917.

Similarly, the veteran’s section spans Ottawa history from 1930 to 1957, showcasing the creation of support systems such as Legion halls and Carleton College — the future Carleton University — which helped re-integrate servicemen into society after the Second World War.

An avid cyclist, Vogl said his favourite part of the new exhibit is a bicycle in the women’s history section.

“The section speaks to how the bicycle assisted in women’s liberation at the time, because that’s how they were able to get out and go places,” said Vogl.

He added that the power of the exhibit lies in the diversity of the stories it tells.

“I think anyone would find at least one or two pieces or stories that they can personally connect with,” said Vogl. “If you’ve come from a family of farmers, or you had relatives fight in the world wars, you’re going to see those connections. And anyone with kids, there’s a lot of talk about growing up in Ottawa as a child, so I think there’s a little bit of something for everyone.”