2 weeks ago 0 9 min read
We use cookies to provide a personalized experience for our users. By continuing to browse this site, you give consent for cookies to be used.
Got it!
Home > Arts & Culture > Television > Hollywood’s representation of Muslims causing more harm and doing little good 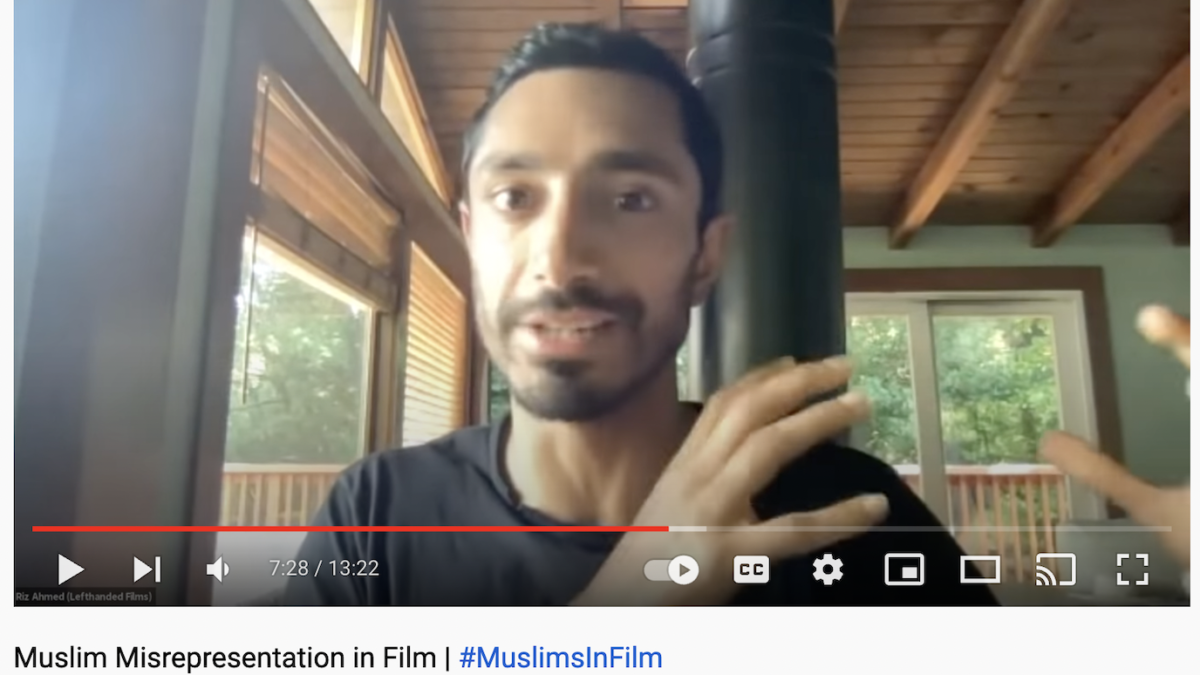 British actor and Academy Award nominee, Riz Ahmed, made a high-profile plea this year — via YouTube and in a series of media interviews — for Hollywood to end the misrepresentation of Muslims in film. Capital Current writer Menna Nayel argues that unrelentingly negative depictions of Muslims in popular culture continue to inflict harm on the community and must change. [Image of Riz Ahmed via YouTube, June 2021]
Arts & Culture

In recent years there have been many attempts at diversifying movies and television shows. By doing so, some cultures are given an opportunity to feel better represented in the entertainment they consume.

You would think, then, that major companies such as Netflix and Marvel Studios are capable of conducting proper research on the communities they choose to represent.

A look at your favourite shows and movies reveals that this is far from the truth.

As a Muslim viewer, I am constantly offended by the false and harmful depictions of my religion. These large, powerful companies mock Islam in the name of representation.

Elite, one of the most popular Netflix original shows, follows a group of students in a prestigious high school. One of the students is a Muslim teenager named Nadia who comes from an extremely strict family and wears a hijab.

For the most part, her story is centred on her falling in love with a “normal” white Christian classmate.

In true white saviour fashion, Nadia is liberated from her family’s “oppressive ideals” by her new boyfriend. As the show progresses, her hijab begins to loosen until she finally removes it, representing freedom from the shackles of Islam.

The idea that a woman cannot possibly choose modesty and religion over what society deems “normal” is extremely offensive. Many Muslim women do not want to be “liberated” by a white person. They choose their faith and follow it accordingly.

A hijab does not symbolize oppression, ignorance or brainwashing. It is a devotion to a religion and a shield from the male gaze.

But, of course, the phrase “my body, my choice” only applies outside the context of Islam.

This example is only one of the many offensive, degrading “representations” of the religion. Netflix has also produced other shows that depict a woman breaking her fast with alcohol and the liberation of a Black Muslim child by white peers.

Perhaps the most dangerous misrepresentation of Islam is the terrorist trope. Although there are countless examples of this stereotype, I am only going to point out the most disappointing: Black Panther.

Although Marvel has included Muslim terrorists in other movies before, I find this one to be the most shocking.

The movie Black Panther is a milestone for the Black community. It received astounding reviews for its progressiveness, acting and storyline. While I find this movie to be extremely important, it is difficult to overlook that as Black culture was being uplifted, Muslim culture was being degraded.

In the very beginning of the movie, we see a man holding a gun to a veiled woman’s head saying: “Don’t move! Wallahy, I will shoot her right now!”

The word “Wallahy” directly translates to “In the name of Allah.” It is equivalent to the phrase “I swear to God.”

Few seem to have caught this small detail, or maybe they simply chose to ignore it. It was blatant for me.

I did not find that this word added anything to the movie. In fact, the characters moved past it almost immediately.

It was an unnecessary attack on Islam in a movie that promotes progressiveness and representation.

It’s particularly troubling because there is a large global community of Black Muslims that includes, for example, sportscaster and former NFL star Ahmad Rashād and long-time Missouri state senator Jamilah Nasheed, as well as American icons such as the late political leader Malcolm X and the late heavyweight boxing champion and activist Muhammad Ali.

After many futile attempts at representation, young Muslims have taken to Twitter to ask Hollywood to stop representing Muslims altogether.

One of the many users who spoke out was @Yennefars saying, “Aren’t you tired of using the same ‘oppressed modest Muslim girl meets a white person, takes off her hijab & is having the time of her life’ storyline. please stop we don’t want anymore representation.”

Despite the outrage from the Muslim community, there was little public reaction.

The misrepresentations of the religion have serious repercussions that extend beyond television screens. They incite Islamophobia, rendering Muslim lives more unsafe and difficult for those living in non-Muslim countries.

For example, in 2019, a heavily pregnant Muslim woman was assaulted in a café in Australia. The offender shouted Islamophobic slurs at her while punching her stomach and stepping on her head.

More recently, two Muslim women and a child were verbally assaulted by a woman in the U.K.  The perpetrator shouted at them to “get that kid out of the way,” saying “me and you (let’s) box … I wanna fight.”

These are just the day-to-day consequences of negative representation, but they also play a part in the overall oppression of Muslims around the world. On a larger scale, France banned students from wearing hijabs at schools and their mothers from participating in activities if they wear one. Government workers are also not allowed to wear a hijab at work.

Quebec’s discriminatory Bill 21 is rooted in the same kind of anti-Muslim prejudice.

Although the Muslim community has been vocal about the issue, only recently has the community received support. Riz Ahmed, a British actor, has taken a stand against movie and TV misrepresentations of Muslims, saying: “It costs lives. Countries get invaded, hate crimes go up, laws get passed.”

Ahmed teamed up with the USC Annenberg Inclusion Initiative to conduct a study called “Missing and Maligned: The Reality of Muslims in Popular Global Movies.” The study analyzed 200 Western movies from 2017 to 2019.

The results found that on the rare occasion when Muslim characters were included, they were negatively portrayed.

I hope that more public figures will speak out in support of the religion and its people. The ramifications of such depictions on Muslims is far greater than most people realize.

Canada-U.S. border community reflects on the impact of frontier restrictions, longs for return to binational normal