2 days ago 0 2 min read
We use cookies to provide a personalized experience for our users. By continuing to browse this site, you give consent for cookies to be used.
Got it!
Home > News > Social Issues > Architecture students hope to bring a “spark of energy” to Château Laurier addition 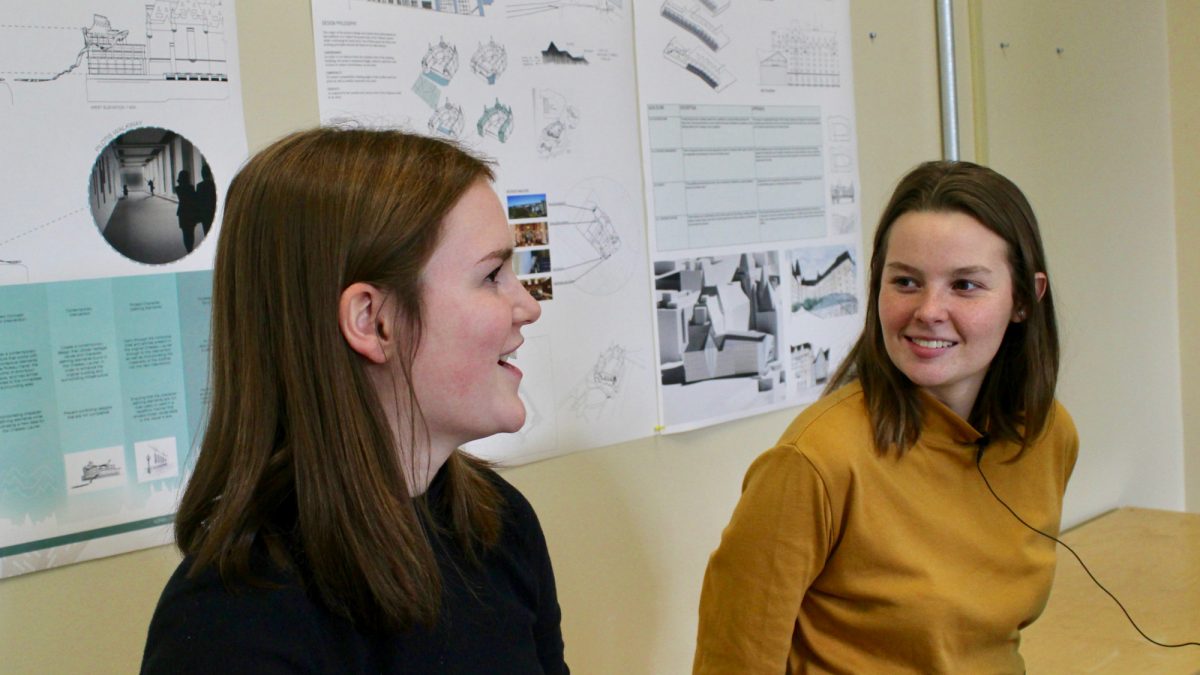 In September 2016, the owners of the Château Laurier unveiled plans for a major addition to the century-old railway hotel. The decidedly modern addition, which would make room for up to 200 additional hotel rooms, was under fire from Ottawans immediately.

Social media users called the addition “horrifically ugly & inappropriate,” and “completely off the mark.” One threatened to “stop going downtown” if it were created, and another employed a neologism warning “never a good plan to Trumpify a heritage building.” Even Mayor Jim Watson took to Twitter to declare “this falls under the category ‘back to the drawing board!‘”

Indeed, Larco Investments, which owns the hotel, and Peter Clewes, the Toronto-based architect commissioned for the design, did go back to the drawing board. Two years and four design-rounds later, the addition has been conditionally approved.

Esponda encouraged her students to find ways to complement the Château’s French Gothic style with contemporary design, while maximizing access to surrounding areas like Major’s Hill Park and the Byward Market.

“I always ask the students how this new addition will be compatible, but at the same time speak for itself,” Esponda said. “This is something that is built in the 21st century.”

The students had to add at least 150 additional rooms to match Larco’s specifications.

“Eight completely different ideas and none of them is a box”

When Teagan Hyndman and Lauren Liebe, both third-year students in Esponda’s class, decided to work together on the assignment, they immediately agreed that their design wouldn’t have a flat roof.

“We really took a lot of inspiration from the existing roofline and wanted to make it interesting,” Hyndman said.

They studied the design of the Château Laurier and decided to use the existing shapes and angles to make sure their addition continued to compliment the older building.

“The really cool thing about heritage projects is that you always have a place to look for inspiration,” Hyndman said.

Luis Panchi Galvan, another student in the class, turned to the landscape around the historic building for inspiration. He said he’s received feedback that his design was “never inward, it was more outward.” Its standout feature is a staircase connecting his addition to Major’s Hill Park. His goal is to open up previously inaccessible areas of the Château Laurier for exploration.

“I was thinking maybe we should bring back the curiosity that people have in the city,” Galvan said.

Galvan’s design features additional public space including a skating rink and an indoor events pavilion. He said working in the Byward Market and taking shortcuts through the park helped him recognize what the area is missing.

Vanessa De Alexandris designed her addition to match the step-like structure of the Ottawa locks, which can be seen from the north end of the Château Laurier. De Alexandris’ design is an “infill project,” meaning that she filled-in existing space rather than building outwards, since the hotel is almost like a horseshoe around an open area.

“If you created a tower here, then you would just block everybody’s views to the water and Parliament,” De Alexandris said. “I wanted to preserve the views for everybody to use.”

“A spark of energy”

The idea to put the students’ work on public display began with a conversation between Esponda and Peter Coffman, an architectural historian and professor at Carleton University. Coffman is a board member at Heritage Ottawa, and an outspoken critic of the Château Laurier addition proposal.

Coffman said that upheaval over the Château Laurier addition isn’t about Ottawans disliking modern architecture: other modern additions have been successful because they fit with the original building.

For Coffman, Larco’s design proposals “look like foreign objects that have been clamped onto the historic building.” He says more recent design rounds do not go far enough in making the angular, Bauhaus-style addition compatible with the existing building, a topic he has blogged about extensively.

Coffman said that the student exhibition presents an opportunity to explore design possibilities he doesn’t feel the public got from Larco.

“I hope the exhibition takes a stick of dynamite to this tightly controlled message that we’ve been given and really enlarges people’s sense of what is possible,” Coffman said. “There are eight different designs and eight completely different ideas and none of them is a box.”

According to Dennis Jacobs, a planner who represents Larco, Peter Clewes was chosen for the project after a request for proposal process, which involved five firms locally and across the country. Once Clewes was selected, a “wide range of design approaches was explored both formally and informally.” Design possibilities included “a variety of forms from a single pavilion to individual towers of varying heights and connections.”

Ideally, Coffman said he hopes that the upcoming exhibition, to which he plans to invite all newly elected members of city council, will have an impact on the proposed design. If it doesn’t, he hopes it will help raise awareness about how public participation can improve the process next time.

“You see these designs and there’s just a spark of energy that you don’t get from a box,” Coffman said. “And energy is one of those things the Château has.”

For the students, the exhibition is about getting feedback on their designs in order to keep improving them.

“I think as soon as they see my idea they’ll have better ideas, or they’ll start to see themselves there,” Galvan said. “All the ideas are never finished, there could always be improvement.”

How did we get here?

“Arguably, in terms of political history this is the most iconic sight in the whole country,” as Peter Coffman put it.

Although the Château is on private property owned by Larco Investments, the City of Ottawa has the power to approve or deny any exterior changes made to the building because of its provincial heritage status. Its national heritage status is mostly symbolic and doesn’t require federal approval, according to Barry Padolsky, a prominent Ottawa architect and member of the city’s built-heritage subcommittee.

In July, after three design rounds, city council conditionally approved Larco’s design, but asked them to go back to the drawing board one last time for a few changes—tweaks like adding Indiana limestone and making the north facade of the building less imposing to make the addition more compatible with the existing building. Dennis Jacobs, a planner who represents Larco, estimates that revised final concepts will be finished in mid-December and a complete set of plans will be re-submitted in early January. Construction is expected to begin in 2019.

For Padolsky, who raised the motion to request final tweaks at the built-heritage subcommittee along with Coun. Tobi Nussbaum, it was a sort of a “Hail Mary pass.” Padolsky said he thought council was ready to approve the design, and he didn’t feel totally overturning the design was “politically doable.” The planning committee endorsed Padolsky’s motion, which was ultimately passed by council. Asking for a few more changes was a compromise. Mathieu Fleury, city councillor for Rideau-Vanier, said he wouldn’t say that council conditionally-approved the design, but rather the “envelope of the expansion.” For Fleury, in an ideal world, Larco would have demolished the Château’s rear parking lot without building an addition. But as a property owner, he said, the decision is theirs to make.

“I don’t think that it’s a project that could garner everyone’s support, but the hope is that the work of the city staff and the applicant come back with something that most can embrace,” Fleury said.

Padolsky thinks that the National Capital Commission should have intervened early in the process by evaluating the addition proposal themselves. The National Capital Commission is responsible for protecting important viewpoints in the capital and has laid out more than a dozen ‘protected views’ including of Parliament and the Rideau Canal. Padolsky said that none of those views look up towards the Château Laurier in the direction of the proposed addition.

“They did not get around to doing these protected views,” Padolsky said, “Therefore, there’s no way to judge the intervention to the Château Laurier from the perspective of a new element to the composition.”

According to Mario Tremblay, strategic communications advisor with the National Capital Commission, although view protection does not apply to the Château specifically, views of the addition from the Alexandra Bridge, Major’s Hill Park and the Rideau Canal locks were studied. Tremblay reiterated that although the Château Laurier is surrounded by federal lands, it is on private land and therefore not subject to the National Capital Act.

Christmas tree buyers in the Byward Market keep it real