2 days ago 0 6 min read
We use cookies to provide a personalized experience for our users. By continuing to browse this site, you give consent for cookies to be used.
Got it!
Home > News > Science > Coyote risk ‘virtually nil,’ official says despite reports of incidents 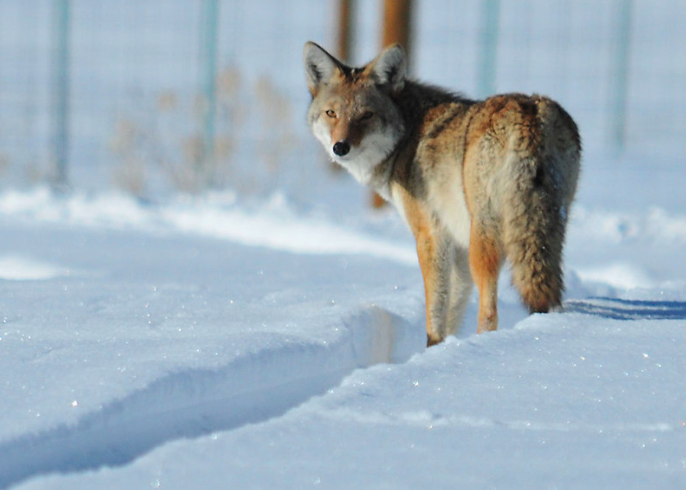 Confrontations between people and coyotes have caused concern in the community but experts say it's rare and there is little risk. ["Winter Coat" Photo @ Rich Keen / DPRA via Flickr; CC-BY 2.0]
Education

In January, a Barrhaven couple lost one of their dogs to a suspected coyote attack.

That was followed a few days later by a sensational story about a father in New Hampshire who wrestled and killed a coyote after it tried to nab his two-year-old son.

These are the kinds of events that have helped to shape a narrative about the presence of coyotes in the Ottawa area.

For Nick Stow, who is a senior planner in the City of Ottawa’s natural systems unit, such stories understandably provoke concern and fear. But he says the risk posed by coyotes is statistically “about 1,000 times less than the risk of being struck by lightning.”

“If we take a few simple precautions, then the risk is virtually nil,” Stow added.

To address residents’ concerns and create a more harmonious relationship with these increasingly present urban creatures, Stan Gehrt, who is professor of wildlife ecology at Ohio State University, spoke to a packed house recently at Ottawa city hall. He was appearing in the city’s on-going wildlife speaker series. Gehrt has studied the animals for 20 years and is a leading expert in their behaviour and population dynamics, especially in cities.

Daniel Waselnuk was one person who arrived with questions.

“I’m not so sure about them because in the news I hear they even attacked a human,” said Waselnuk. “That’s why I thought I’d come to hear the whole story,” he added.

Despite some 500,000 to 800,000 coyotes being killed every year across North America by a combination of hunting, trapping, accidents and “nuisance” kills, coyotes are well established in cities, said Gehrt.

He demonstrated their adaptability with videos of coyotes using sidewalks and waiting for the lights to turn before crossing the road. Gehrt’s photos of coyote pups earned sighs and “awws” from the crowd.

With radio collars, Gehrt has been able to track how packs maintain strong territorial boundaries even in urban areas and how the alpha pair will sometimes give up a chunk of their own territory to offspring once the pups reach adulthood.

Their territorial nature and family structure in which both parents care for pups are often factors explaining coyote attacks on dogs. To keep pets safe, Gehrt recommends keeping dogs on leash, or at least within sight, particularly near greenspaces.

Gehrt’s current research is about coyote personalities and which type does best in an urban environment. Studies of other species have shown bold animals do better than shy ones, but Gehrt explained that with coyotes, “you have two forces working in opposite directions.”

Bold coyotes may be rewarded in city environments because they are faster to try new food sources and learn to cross roads. But if they are too bold, they may draw the attention of people who will relocate or kill them.

“I thought the approach of psychological understanding of coyotes was very novel because most of the research in coyotes in Canada so far has focused on zoonotics and diseases… or they have focused on the problem side in terms of population management,” said Nguyen.

The main points Gehrt said he hoped people took away were an awareness that coyotes are common in cities and, second, knowledge “that they actually have a lot of control over the relationship between people and coyotes.”

He also set the record straight about some common misconceptions, for example that coyotes are large, aggressive animals.

Coyotes have spread across the continent “in spite of us, not because of us,” said Gehrt. Smart and adaptable, they appear to be here to stay. Conflicts between coyotes and people do happen, but some basic knowledge will pave the way towards peaceful co-existence, he said.