2 weeks ago 0 9 min read
We use cookies to provide a personalized experience for our users. By continuing to browse this site, you give consent for cookies to be used.
Got it!
Home > News > Ottawa > Updated Dark Side of Sandy Hill walking tour acknowledged the role played by politicians in creating residential schools, Indian Act 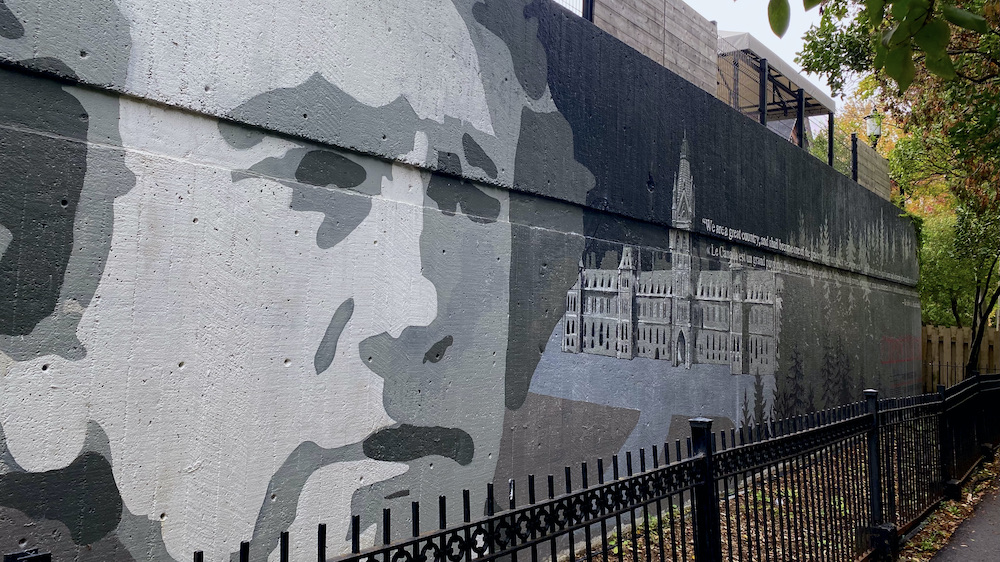 A mural of former prime minister John A. Macdonald covers a wall along a narrow pedestrian path next to Stadacona Hall, where Canada's first prime minister once lived. The painting was a collaboration between école secondaire publique De La Salle students, Randall's, the Prime Ministers' Row initiative and CCC No. 21. [Photo © Miranda Caley]
Community

The Dark Side of Sandy Hill walking tour has returned just in time for Halloween and, after an initial run last year, has been updated to highlight the Ottawa neighbourhood’s links to the residential schools tragedy.

Through her work with the local community association Action Sandy Hill, tour designer Hilary Duff created The Dark Side of Sandy Hill to “bring the community together safely during COVID.” Being from the neighbourhood and having some familiarity with its heritage, Duff said she thought October was the perfect time of year to conduct a walking tour with a dark twist.

The walk brought participants into the world of the Spanish flu epidemic of 1918, former prime minister Mackenzie King’s séances and the great sewer explosions of 1931.

While it was packed with the lesser-known, darker elements, this year’s tour also acknowledged the Canadian government’s mistreatment of Indigenous peoples.

Two of the stops were outside the homes of former prime ministers John A. Macdonald at Stadacona Hall at 395 Laurier Ave. E. and Wilfrid Laurier and William Lyon Mackenzie King at Laurier House at the corner of Laurier and Chapel streets.

While the three prime ministers are just a few of the many former Sandy Hill residents who had significant impacts on Canadian history, their involvement with residential schools and the Indian Act became part of the tour.

Those controversial connections to residential schools and other discriminatory policies were not included in the project’s pilot last year, as Duff decided she wanted it to be more light-hearted and fun, given the circumstances of the pandemic.

“I’d be doing a disservice to the reconciliation and what has really happened in (Canada’s) history if I didn’t mention Macdonald’s involvement and co-ordination of the residential schools,” she said just ahead of the three late-October dates for the tour. “I’ve decided it’s important to shape it in the way that I’ve decided to shape it this year.”

This year’s tour mirrored last year’s with around 10 stops, but the script was updated to include more information about political figures’ involvement in the cultural genocide that has deeply affect Indigenous people. The revised walking tour followed the removal of a statue of Macdonald in Kingston, Ont. and before a recent announcement to “revamp” plaques on past prime ministers’ graves.

Duff said she started last year’s tour telling participants to close their eyes and envision horse-drawn carriages being pulled through muddy streets in the 1800s. However, an Indigenous land acknowledgement was front and centre before this year’s walk.

“The way the tour was last year, it really approached history through the lens of the built history of the city and (suggested) history started when Europeans came in,” said Duff. “While it still focuses on the buildings and people who lived in the neighbourhood after colonization started, it’s important to reference the people whose land that sits on.”