5 days ago 0 3 min read
We use cookies to provide a personalized experience for our users. By continuing to browse this site, you give consent for cookies to be used.
Got it!
Home > Politics > Canada Votes 2019 > Five moments in the Ottawa Centre debate 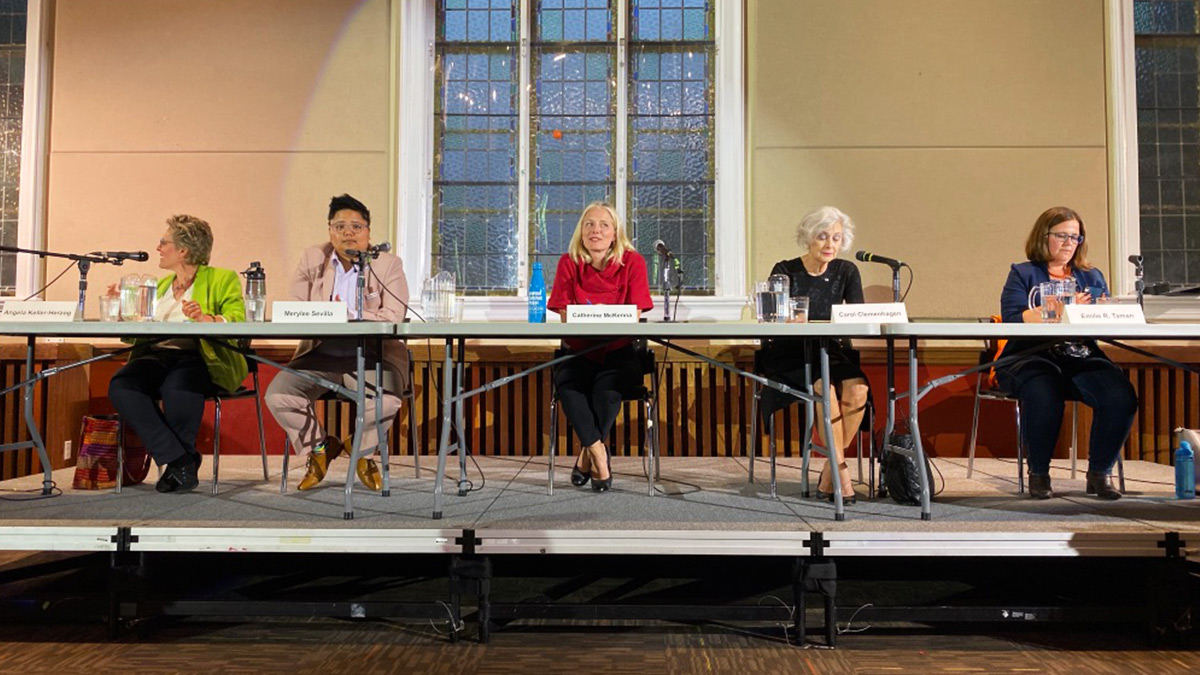 Five female candidates running to represent Ottawa Centre in the next federal parliament met Wednesday evening for a heated first public debate in the riding at the Glebe Community Centre.

Conservative Carol Clemenhagen, the Green Party’s Angela Keller-Herzog, People’s Party’s Merylee Sevilla, the NDP’s Emilie Taman, and incumbent Liberal heavyweight Catherine McKenna sparred over a range of issues before a packed hall, with some audience members spilling out into the nearby aisles.

The evening produced many moments but here are five critical conversations.

The politics of pipelines

One of the first topics of the night was global climate change, which put the focus on McKenna, who was the minister of Environment and Climate Change in the Liberal government. Notably, the Liberal’s $4.5 billion purchase of the Trans Mountain pipeline was up for debate.

“One of the biggest acts of hypocrisy I’ve seen out of our current government is declaring a climate emergency one day, and approving a pipeline the next,” said Taman.

Taman also called the Liberal election promise announced on Tuesday, which included lowering taxes from nine per cent to 4.5 per cent for clean tech companies, “another exercise of hypocrisy.”

Clemenhagen stepped into the debate by criticizing McKenna for her relations with provincial governments. With Ontario Premier Doug Ford in mind, Clemenhagen said that McKenna “has irritated, annoyed, made derogatory comments about premiers, slowing our process, getting us off track.”

McKenna responded to Taman by saying the pipeline would not increase emissions, with “every single dollar going to a clean economy.”

“We have to have ambitious targets,” said McKenna.

To Clemenhagen, she said: “I wish to God I could work with Conservative politicians, rather than fighting in court. …What is at stake is we could go back in time where it is free to pollute. It is up to the federal government to act in the national interest, and that is exactly what we have done.”

Merylee Sevilla produced some heat when she said she did not believe in the global climate emergency. That remark was met with boos from the crowd.

“I ask anyone out there: Think about when you were in school – did you learn about climate change, global warming? Yes. Then you learn that the world goes through cycles,” said Sevilla. “There are two sides to the story. There are scientists who counter other scientists.”

Sevilla later accused the other candidates of listening to 16-year-old Swedish activist Greta Thunberg, rather than Indigenous communities in the north. Sevilla was later met with even more uproar when she called Thunberg someone who “skips school” to “get a mark”.

In the audience, social worker Jennifer Munroe told Capital Current that overall, Sevilla was “disrespectful” during several parts of the debate.

“She certainly doesn’t speak in a way that it would make me consider her an advocate,” said Munroe. “She shouldn’t be on the table today.”

The NDP’s Taman then said that affordable housing should be another important priority for the riding’s next MP.

“In Ottawa right now, it is absolutely out of control. I’ve seen people struggling. I met someone who is renting a balcony to sleep on,” she said. “In a G7 capital, it is completely unacceptable.”

McKenna said the Liberal government’s National Housing Strategy, has injected $220 million for afforable housing in Ottawa Centre. McKenna said, however, that “there is more to do.”

That brought a retort from Taman who said that “we don’t have to accept just ‘good enough’.”

“Do you want to live in a country where two billionaires can amass as much wealth as 11 million Canadians, while every night in our city, people are sleeping on the streets?” said Taman.

Indigenous issues on the agenda

Faced with a question regarding the health and safety of Indigenous youth in Canada, McKenna, who stressed the importance of “all young people,” pointed to the Indigenous Child Welfare Act and the “billions invested in Indigenous communities” as ways the Liberal government tried to move towards reconciliation.

“Is there more work to do, yes. Reconciliation is extraordinarily hard,” said McKenna. “I wish there was some magic wand you could wave — the rebuilding of trust is extreme.”

While Taman said she agreed about the importance of reconciliation, she said that the new law has not fixed the child welfare system.

“The child welfare system is a disgrace, and it makes me embarrassed to be a Canadian,” said Taman. “As a mother, I find it extremely painful to read about the rate of First Nations kids that are being taken from their homes, at a rate higher than we saw under the Sixties Scoop and residential schools.”

Taman also pointed to the over-incarceration of Indigenous peoples, and what she called systemic racism in the justice system. She said that would be her “top of mind priority” to tackle.

Sevilla also favoured more assistance to Indigenous communities stating that funds could be diverted from other less-pressing projects.

“I was in school and I learned about [the Sixties Scoop], and I thought: ‘That can’t be.’ But that is our history. It was a dark part of our history,” said Sevilla, to which Taman replied, “It’s also our present.”

Even though she is a child of immigrants, Sevilla sparked more uproar when she said she was tired of the numbers of immigrants entering Canada.

“When you come to Canada, you are coming here on the premise that you are embracing the diversity, the multiculturalism of Canada. Do you know the number of times that I have had homophobic and racist slurs thrown at me?” said Sevilla.

“They come to this country and say, ‘Nope, in my country, you would be stoned.’ I respect your beliefs, but the moment you say you’re going to be violent towards me, that is when I have a problem.”

Clemenhagen disagreed with Sevilla, saying that Canada needs to have “a compassionate, orderly and fair immigration system.” This includes, she said, helping refugees who are “fleeing from life-threatening situations.” Nevertheless, Clemenhagen also said that there was a potential need to better manage “illegal border crossings” with changes to law.

Taman said “there is no such thing as mass migration,” and said she found what she called “the racial undertones” from some other candidates “disturbing”.

“We border a country that is engaging in the most inhumane treatment of migrants in the United States: caging children,” said Taman. “If a person seeks asylum from within our border, we need to adjudicate their claim.”

For more information about how to vote, including advance polls and mail submissions, visit the Elections Canada website.