1 week ago 0 1 min read
We use cookies to provide a personalized experience for our users. By continuing to browse this site, you give consent for cookies to be used.
Got it!
Home > Commentary > For this pet-loving human, sharing a home with six furry friends is the cat’s meow 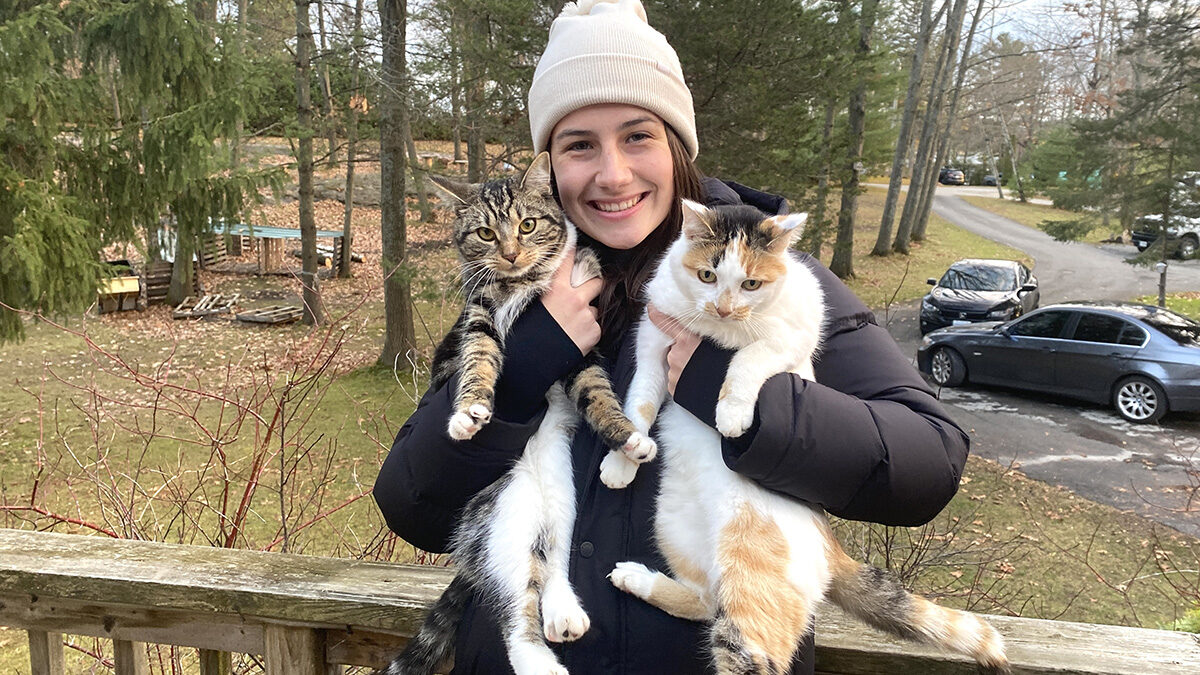 Six cats can be a handful — but they're well worth it. Welcome to the zoo that Capital Current reporter Lauren Kerans likes to call home. (From left: Coco and Checkers held by Lauren) [Photo © Lauren Kerans]
Commentary

But before we jump to any conclusions, let me explain why I live with six cats.

For context, I’m a university student who lives at home with my parents. Growing up, I always had cats in the house. To be honest, I find it very strange when a home does not have a cat, or a pet of any kind. Who greets you at the door after a long day?

It’s worth mentioning that technically only four of the six cats belong to my family: Checkers, Boots, Bean, and Pumpkin. The other two belong to my boyfriend, who recently sold his house and moved in with us temporarily, along with Toast and Coco.

Believe it or not, this isn’t the first time six cats have lived in our home. But that was back in 1994, before my brother and I were born, and just before my parents had met.

My father was on his way home in his Bell Canada van, when he noticed a cardboard box on the side of a rural dirt road, and a small kitten nearby. He pulled over and discovered three unaccompanied kittens, left helpless.

He scooped the three up and continued on his way, even though he already had two cats and two dogs waiting at home. However, something wasn’t sitting right with him as he kept driving. Three kittens is a fairly small litter size, he thought. So he turned around, figuring he’d better double-check he had them all.

Sure enough, kitten number four had escaped his attention. He gathered up Wendel, who would live for 17 years and become the cat I remember most from my childhood.

Most cats like to have their own space, and having six in one house can be a tad crowded. Thankfully, we live on nearly two acres of property on a quiet country road just outside of Mallorytown, about 130 kilometres southwest of Ottawa. This allows the cats to roam freely outside during daylight hours and burn off some steam.

However, as winter approaches, they are less keen to be outdoors. This can lead to lots of indoor play fights and sudden bursts of energy, or “zoomies”.

Those who don’t have a cat at home may be under the assumption that “all cats are the same” or believe that cats lack personality. My favourite thing about having six cats in the house is seeing their different personalities. Some are reserved, some are outgoing lap cats and others are just plain hilarious.

Our orange tabby, Pumpkin, enjoys breaking into our food cupboards and eating crackers, bread or anything she can get her paws on. She also chooses strange sleeping locations: under the sink, in the laundry room on the fridge.

Pumpkin is the standout character of the six. We adopted her in 2018 through I Am Alive Cat Rescue in Brockville, not far from Mallorytown. At the time, we had three cats and my mom was away in Portugal. I always said I wanted more than three cats, constantly citing the six my parents had once had. Three is nothing, right?

‘You’d think that living with six cats would feel like a zoo, which my parents can attest to, but I find it oddly relaxing. It’s comforting to see a sleeping cat in every room of the house. I never feel alone.’

So, since my mom was the “sensible” one who insisted four cats would be ridiculous, I used her vacation time to persuade my dad to adopt another one. My charm worked and we brought home Pumpkin without my mom’s consent.

Sure, she was very upset with us when she arrived home a few days later. But who could stay mad at a little orange furry face?

Cats bring me a lot of joy, but they also have a way of calming me down. There’s some sort of spiritual connection. You’d think that living with six cats would feel like a zoo, which my parents can attest to, but I find it oddly relaxing. It’s comforting to see a sleeping cat in every room of the house. I never feel alone.

I’ve also been fortunate enough to find a great community of fellow cat lovers on Instagram. I enjoy connecting with and relating to these like-minded folks. Seeing others dress up their cats for the holidays or celebrate their cat’s birthdays shows me that being an eccentric “cat lady” is absolutely OK.

You can check out my two cat Instagram accounts here: @kerans.kitties and @toast.and.coco.

I know a lot of cats aren’t as lucky as the six under our roof, so I try my best to help when I can. I’ve donated time, money and food to local humane societies and animal shelters, but I’d love to do more.

One of my goals in life is to open a cat rescue, or even a cat café where I can help cats find their “furever” home.

If you’d like to help, please support your local animal shelter, humane society, or trap-neuter-return programs.

And maybe try harder to see sweetness rather than strangeness in a house full of cats.