1 week ago 0 1 min read
We use cookies to provide a personalized experience for our users. By continuing to browse this site, you give consent for cookies to be used.
Got it!
Home > News > Ottawa > Studio for artists with disabilities marks 20th anniversary with holiday sale 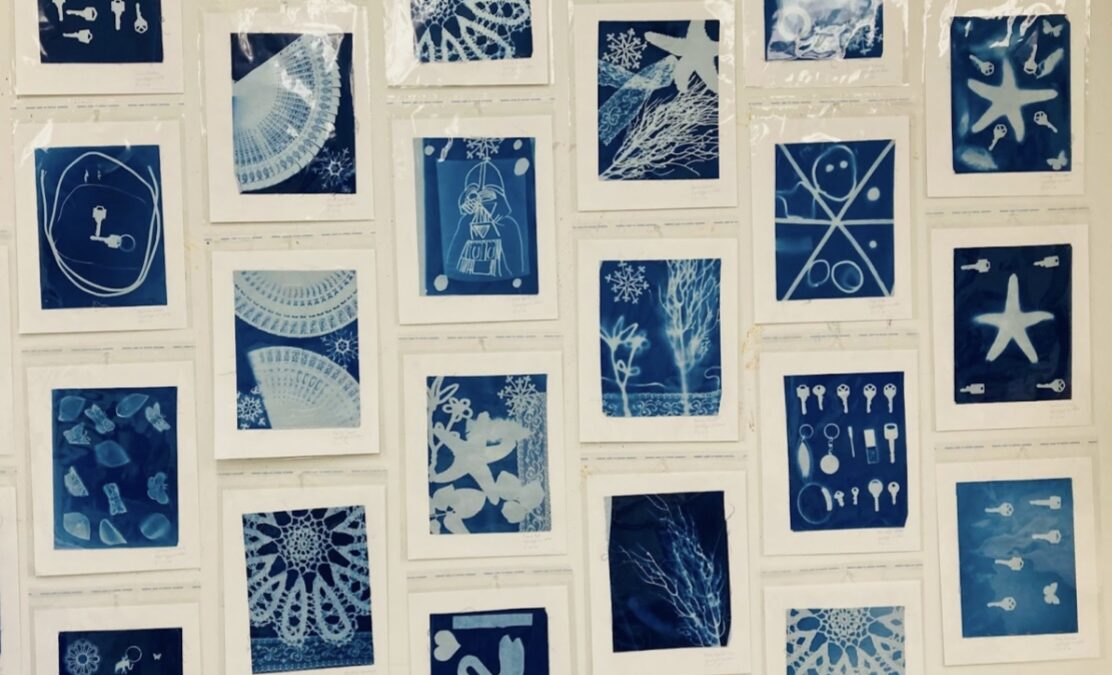 A wall of cyanotypes that will be displayed at the Snow Day Shop. A cyanotype is a type of photograph created by the combination of sunlight, UV lights, and iron salt solutions. [Photo © Karen McRae]
Arts & Culture

By MalisaThoudsanikone, 2 months ago 0 4 min read

In 2002, BEING Studio was a small organization with a big dream: to help artists with disabilities and provide a safe space where they can achieve their creative ambitions. The studio began with only a few artists and two part-time staffers. All of the studio’s belongings were kept in a portable wooden box tucked away in a rented room at the McNabb Community Centre.

Now, BEING Studio will commemorate its 20th anniversary with a special holiday sale at the Bronson Centre on Dec.3.

From 10 a.m. to 3 p.m., the Snow Day Shop will be selling paintings, prints, sweatshirts, T-shirts and tote bags made by the BEING artists. For those who can’t make the event in person, there is an online shop available.

Shoppers will also have a chance to explore the studio’s memorabilia that will be on display to honour its 20th anniversary. There will be photographs that show how the studio has changed throughout the years.

The event will be the studio’s fourth annual Snow Day Shop. Both the staff and the artists have been busy preparing for the sale, while fondly reminiscing about the years they’ve spent with BEING Studio.

Walter Howell, the executive director, is impressed by the studio’s enduring efforts to support and amplify artwork by artists who live with disabilities.

“I think (the 20th anniversary) says a lot about the individuals as a collective,” said Howell. “They’ve managed to elevate the organization from the wooden shoe box to a studio. So, for myself, it shows a sign of commitment to the disability arts community, which is extremely important.”

Analisa Kiskis, one of the artists at the studio, hopes the sale will be another opportunity for the artists to have their voices heard.

“They have their own dreams, and they should be able to get what they want in life as an artist,” said Kiskis.

Kiskis has been creating at BEING Studio since 2004. The studio has supported her journey of being a full-time professional artist. She specializes in working with watercolour, pen and ink and acrylic paint.

Kiskis describes her artwork as a combination of her love for the Mexican artist, Frida Kahlo, elements of Kiskis’ Polish culture and other traditions around the world. With her artwork, Kiskis said she aims to honour the voices of various cultures and their legacy in the art world.

Before she was a professional artist, Kiskis would draw on the walls of her childhood home. Although it angered her family, they noticed her talent and her passion for art. From there, they encouraged her to become an artist at BEING Studio.

Kiskis said she looks forward to selling her artwork at the Snow Day Shop, as it reminds her of the joys of creating and sharing her creativity with others.

Kiskis said she hopes to present her work in bigger cities, such as Toronto or New York.

The chance to provide the artists with the support, skills and resources to grow creatively is what the studio hopes to continue doing in the future.

Karen McRae, the director of operations at BEING, said she’s motivated to help keep the studio going every time she sees the artwork on the walls.

“I’m always like, ‘Oh, I want that! I want that!’ Seeing the art they produce is really amazing,” McRae said. “I just think that BEING Studio is a community that’s really wonderful to be a part of.”

The studio supports more than 50 artists with developmental disabilities. Their artwork is always available on the website, which helps them make a living as full-time artists. Members of BEING Studio also have the opportunity to visit exhibitions around Ottawa, and collaborate with guest artists to hone their skills.

“We plan, we implement, and follow up,” said Howell. “But it’s really all about the artists at the end of the day.”

For this pet-loving human, sharing a home with six furry friends is the cat's meow