3 days ago 0 4 min read
We use cookies to provide a personalized experience for our users. By continuing to browse this site, you give consent for cookies to be used.
Got it!
Home > Programs > Midweek > How to cook a turkey over a fire 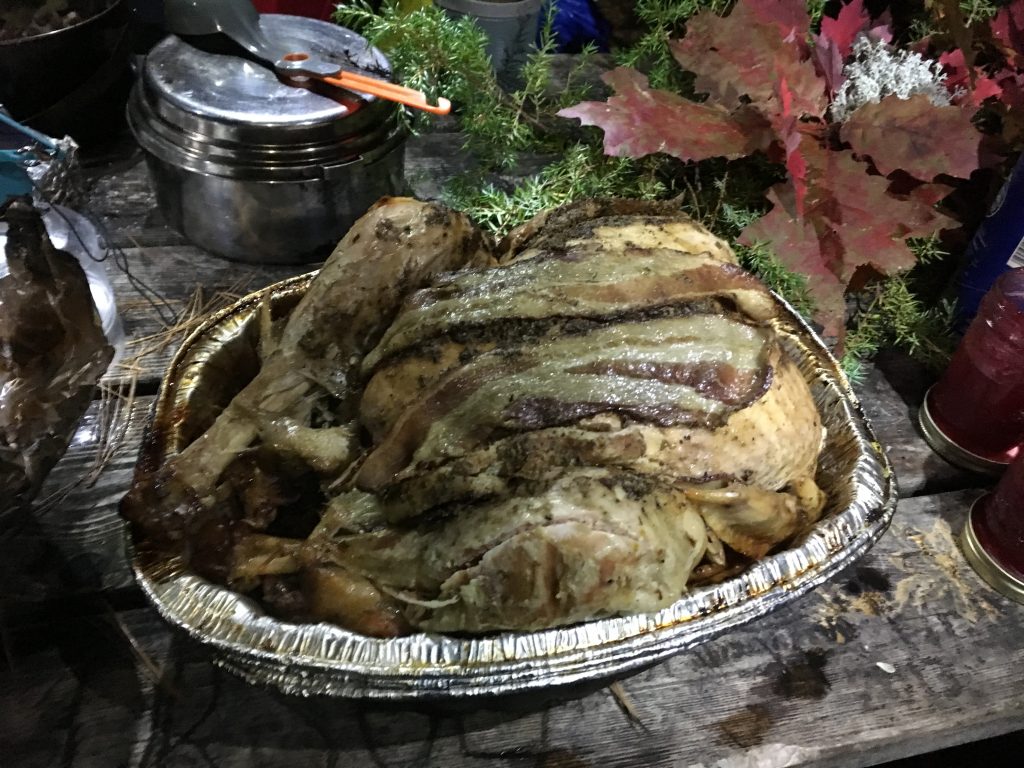 Sometimes the best meals are not cooked in an oven, but under the stars and in the woods with friends. For the past seven years, friends and I have gone on what we call a “turkey trot”.

Every Thanksgiving, we head into the bushes to cook a turkey over a fire. Sometimes it’s on foot, our backs weighed down by boxed wine and grub. Others times, we go by canoe. We also bring all the side-dishes: such as pineapple pork stuffing, gruyere cheese mashed potatoes, grape and walnut brussel sprouts, stuffed squash, beets with goat cheese, fire-roasted parsnips, highbush cranberry sauce, and pumpkin pie. We use the fire to cook everything. Sometimes we need multiple fires, as the feast gets quite large. The tradition has happened across Canada: the Canadian Rockies, coastal BC, and Ontario. Sometimes the trot goes well, and one time it did not.

Nevertheless, lessons were learned. The trot will never again be held on the BC coast as it can be too wet. It rained so much we barely got a fire going and it never became large enough for the turkey. We cooked what we could, which was mostly just the stuffing and retreated to an emergency cabin. It rained so much that a nearby creek burst it’s bank and started to flow under the hut. As we lay in our sleeping bags, it felt like we were in a ship as water swished past under the floorboards. During the night, a mouse got at the turkey. We didn’t notice and while my friend Jake carried it back to town the next day in his backpack, it leaked all over his sleeping bag. And the worst part – Jake is a vegetarian.

Like I said, lessoned learned. It’s best to have the trot in places where you can have good fires.

This Thanksgiving, we went to Kawartha Provincial Park in Ontario. It’s popular with canoe enthusiasts. Although we had some rain, the weather was splendid. There were nine of us in attendance this year, one even flew in for the weekend from Alberta. Here’s what the trip sounded like:

If you’d like to cook a turkey over a fire, here’s how you’d do it:

Don’t be surprised if the turkey has a smokey taste. That’s what makes it so good. I’ve never cooked a turkey in a kitchen before, I actually have no idea how you would even start. It seems boring, where’s the adventure and risk? Can it really taste good if you didn’t carry it on your back? Nor is there the threat of your dinner catching fire, or animals running off with the mashed potatoes. Or even the worry that the canoe will overturn on the way in and everything lost.

Most importantly, food always tastes better in the Great Outdoors.

Dogsledding in the Yukon