5 days ago 0 6 min read
We use cookies to provide a personalized experience for our users. By continuing to browse this site, you give consent for cookies to be used.
Got it!
Home > Sports > Men’s U23 fast pitch nationals begin in Carp on the third swing 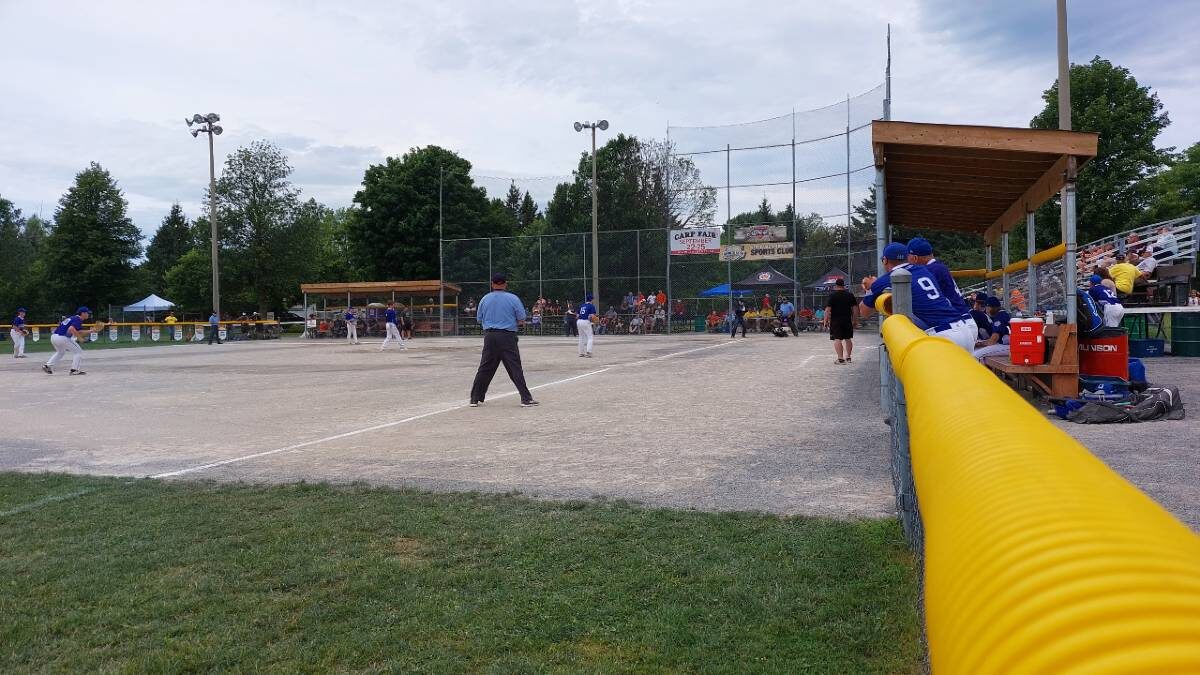 Team Quebec squared off against the Delisle Pride from Saskatchewan on day two of the U23 Men's Canadian Fast Pitch Championship. [Photo © Jonathan Tovell]
Canada

The third time was the charm as the Men’s U23 Canadian Fast Pitch Championship in Carp has finally started after two swings and misses caused by the pandemic.

The tournament at the Carp Fairgrounds was cancelled in 2020 and 2021 due to COVID-19. Carp, just northwest of Kanata in the West Carleton-March ward, was supposed to host both times after submitting a bid in 2018.

“It’s amazing, all of our hard work coming together and seeing it all on display,” Erin Durant, co-chair of the championship, told Capital Current on Wednesday. “It’s just nice to know the effort is worth it and the sacrifices that we made paid off.”

Seven teams began their pursuit of the championship on Tuesday. The Ottawa Valley Chiefs are the host, while Owen Sound, Tavistock and Alvinston round out the Ontario-based teams.

The Saskatchewan team comes from Delisle, Sask., about 30 minutes southwest of Saskatoon. Quebec and Newfoundland round out the seven groups participating in Ottawa’s first national softball tournament since the 2005 women’s championship in Kars.

Stittsville hosted the last men’s national championship in Ottawa in 1998 for the U19 age level.

Games on days one and two were seldom quiet. Teammates shouted in support for their player at bat, or their pitcher on the mound. After a home run, teams would empty the dugout to line up for high-fives with the scorer.

The rallying sentiment in the ball diamond reflected the efforts of community organizers who put together the fast pitch tournament.

“I live around the corner. I can tell you this area, this space that we’re on, has never looked like this,” Jon Bergeron of the West Carleton Amateur Sports Club said at the opening ceremony Tuesday evening. “The people who decided three, four years ago that this was something that they wanted to bring to our community – we’re not talking about people who are asking for anything in return. We’re talking about a bunch of friends and volunteers who love this space, this game and this community.”

The Delisle Pride had to rely on community support after they shipped their equipment via a courier instead of risking lost luggage at airports. As of Wednesday, “it’s still not been located,” Durant said.

“The local softball community has been helping by bringing the bats in particular for them to borrow,” Durant said while Delisle faced Team Quebec in their third match, a 6 to 5 loss.

The Carp Agricultural Society, which runs the Carp Fair at the fairgrounds, lent their space for the umpires to use as a dressing room, Durant said. She also said Carp’s Huntley Community Association applied for a grant to get a scoreboard on the main diamond.

Tournament organizers also created the “Never Give Up” award in recognition of the namesake hat campaign, started by Travis Iverson and Iver Fashion. The business specializes in high-quality accessible fashion. Proceeds from hat sales go towards keeping costs lower for clothes with the “seated body” in mind.

The Never Give Up award “is handed out at the end of each game to a player that shows particular grit or determination, or a really strong effort in a losing game,” Durant said.

Durant said more visitors showed up on day one than expected after the long weekend.

“You spend so much time working on this and your fear is, ‘Will anybody show up?’ ” Durant said. “It was very nice to see a full park.”

“Events like this just don’t happen,” Sudds said. “They take a lot of work, and they also contribute a lot back to our local economy.”

“A million dollars in economic activity, and that’s just the empties,” Watson said.

The wait was worth it for those involved in the tournament.

The tournament continues until Sunday, Aug. 7 when the semifinal and final take place. Day passes are $15 for adults and $12 for students and seniors. Children 12 and under are free. Visitors can buy tickets online or at the gate. Parking is available at W. Erskine Johnston Arena.