2 weeks ago 0 1 min read
We use cookies to provide a personalized experience for our users. By continuing to browse this site, you give consent for cookies to be used.
Got it!
Home > Business > NCC conditionally approves plan by tour companies to open ‘Hill Docks’ on Ottawa River in 2022 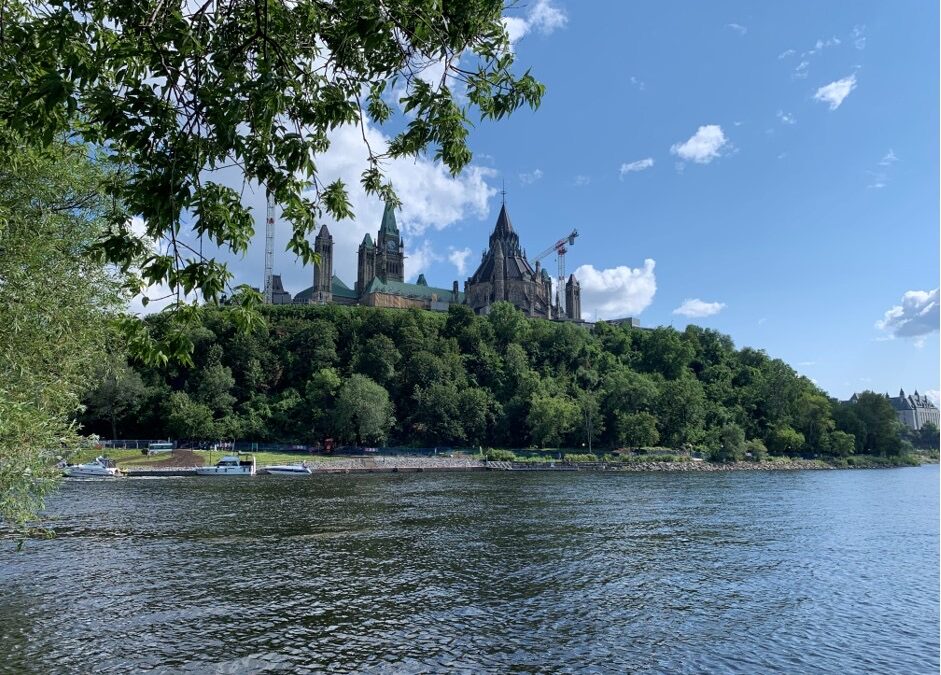 Hill Docks is a new docking site to be installed at the foot of Major's Hill Park, near the entrance locks of the Rideau Canal. It will offer views of Parliament Hill and, across the river, the Canadian Museum of History. [Photo © Erik Lupien]
Business

Owners of Ottawa Yacht Tours and Palapa Tours have received a conditional go-ahead for the installation of new docks on the Ottawa River.

The National Capital Commission has accepted a preliminary proposal for the new docking site on the shoreline below Major’s Hill Park near the headlocks of the Rideau Canal. The NCC has also agreed to lease Crown land for the facility.

“Hill Docks will create a connection point on the river for people who want to have access to the river and for boaters who want to park near downtown,” said Erik Lupien, owner of Ottawa Yacht Tours.

“Let’s say you’re on a boat and you come down from Kingston and you want to park downtown Ottawa overnight — stay at the Château Laurier, go for dinner in the Byward Market. You’ll now be able to do that, by mooring at the Hill Docks.”

The site, to be named Hill Docks, will be at the site of a historic steamboat landing, a short distance below the Château Laurier, in a part of the river known as Entrance Bay.

While Lupien said there are limited opportunities to head out on the water, his vision of creating a destination spot along the river aims to give both local residents and tourists a better chance to enjoy Ottawa’s scenic views.

Lupien said he expects the docks will accommodate short-term parking for 12 boats at a time.

He added that the Ottawa Police will also be invited to park its boats at Hill Docks, providing a convenient location for emergency watercraft.

Lupien said he hopes to add other amenities in time for the summer of 2023.

This includes water gear rentals — such as paddle boards and kayaks — to bring more people out on the river.

“It’s not just going to be a set of docks. Our dream is to make it a valued community destination on the water,” said Lupien.

And there is more to the vision. He said he hopes to add a patio that would sit on land next to Hill Docks, with Adirondack chairs, where visitors can enjoy food and drinks.

Another addition is in the works, but has yet to be confirmed.

Several Tavern restaurants are located in downtown Ottawa, including Tavern on the Hill, Tavern on the Falls and Tavern at the Gallery.

Lupien said he could envision a Tavern on the Water at the Hill Docks, giving people the chance to dine with views of the Ottawa River and Parliament Hill.

“The view is second to none,” said Lupien.

“When you stand at the shore, you see the majestic view of Parliament Hill. You also see to your left, the Rideau Canal locks, and on the right you’re looking across the river at the Museum of History and the Alexandria Bridge.”

Lupien said Ottawa Yacht Tours and Palapa Tours shared their proposal with Ottawa Tourism, applying for funding for the project.

Ottawa Tourism’s funding program is known as the Destination Development Fund, investing in projects that will improve Ottawa as a tourist destination.

The NCC also tentatively agreed to allow the two boat tour operators to install about 30 metres of docks anchored to the West side of the cement wharf on the Ottawa River near Jacques Cartier Park in Gatineau.

Docks along the wharf will give Ottawa Yacht Tours a location where they can park their boat overnight.

It will also provide a spot where they can pick up and drop off passengers on the Quebec side.

Lupien points out that local marina owners have been reluctant to accept commercial boats, fearing safety risks associated with passengers moving in and out of their marinas.

Ottawa Yacht Tours and Palapa Tours plan to move forward with the Hill Docks project, all while offering scenic tours along the Ottawa River during the summer months of 2022.

This past summer, Ottawa Yacht Tours was approved by Transport Canada to operate its yacht as a small passenger vessel.

“This means Ottawa Yacht Tours meets all the rules and safety regulations enforced by Transport Canada, which was no small undertaking,” said Lupien.

Ottawa Yacht Tours started with one yacht and added a second this past September.

“We’ll offer tours on both yachts simultaneously next summer, which will be a great experience for passengers and groups of up to 24,” added Lupien.

Lupien said the pandemic led him to turn his passion for yachting into a business, and now he dreams of turning the river into a more attractive destination for both Ottawa residents and tourists.

His dream may become a reality next spring.

“When I’m on the boat and the sun starts to set and I have people with me, I just absolutely love sharing that,” said Lupien.

“It just warms my heart and I want more people to be able to experience that.”

Lupien said he hopes to have both Hill Docks and docks at the Gatineau wharf by Alexandria Bridge ready for visitors by end of May 2022.