4 days ago 0 8 min read
We use cookies to provide a personalized experience for our users. By continuing to browse this site, you give consent for cookies to be used.
Got it!
Home > News > Science > University of Ottawa lab takes aim at cancer stem cells 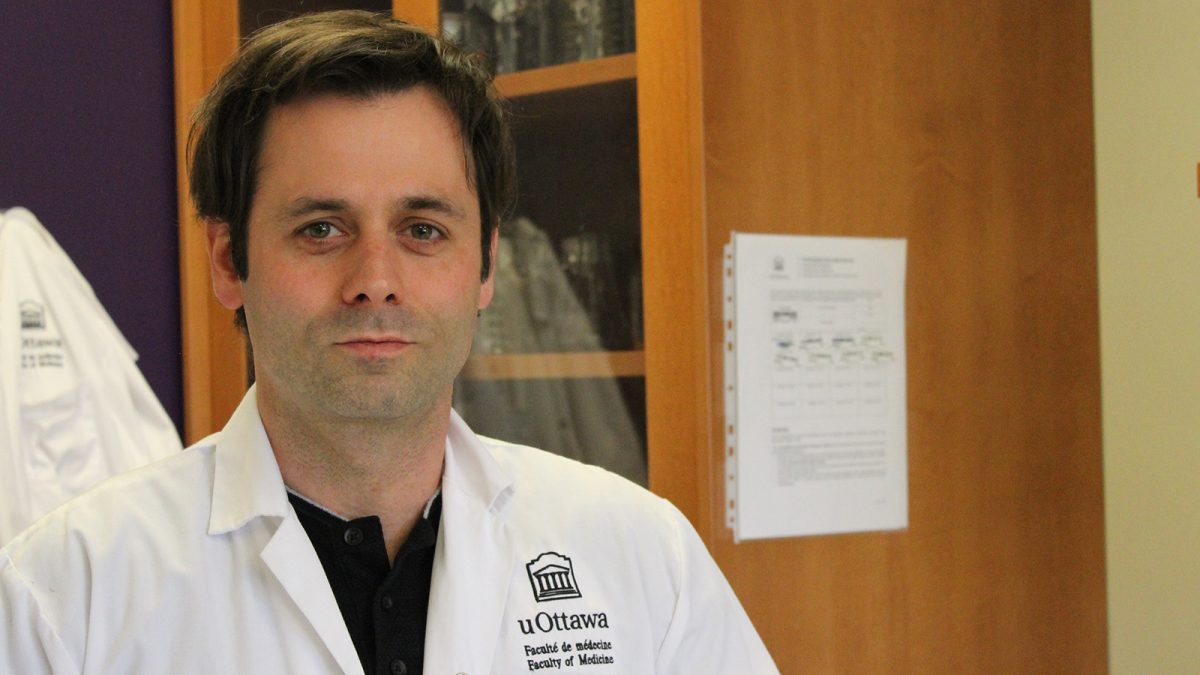 Dr. Yannick Benoit of the Benoit Lab is looking forward to furthering his research with the addition of a new, cutting-edge machine that will assist in his investigation into cancer stem cells. [Photo © Danielle Edwards]
Health

Dr. Yannick Benoît and his lab at the University of Ottawa have been awaiting the arrival of a spectral flow cytometry analyzer, cutting edge technology that could help him and his trainees contribute new information in cancer treatment research.

The Benoit Lab received a grant of more than $200,000 in March from the Canada Foundation for Innovation.

The money will go towards the $500,000 pricetag for the new technology. The remaining $300,000 will be covered the province and the private sector.

Benoît, 38, said that he believes the investment will go a long way in reaching his scientific goals.

His research project is attempting to identify stem cells in a tumour and create drugs to specifically target them. These cells are responsible for the growth of the cancer and its spread throughout the body.

“What we’re trying to do is to develop new molecules, new therapies that will target those very important cells for the disease, because the cancer stem cell seems to be escaping from the current standard therapeutics in the clinics,” said Benoît. “So they cause a problem because if we want to get rid of the disease, we absolutely need to get rid of the root.”

Current cancer treatments, like surgery and chemotherapy, are only somewhat effective in eradicating the disease. While surgery does get rid of the physical mass of a tumour, lingering cells can reactivate the cancer. And when it comes to chemotherapy, Benoît calls it “pure poison.”

With current technology, it’s difficult to pick out the cancer stem cells from other non-functional cells in a tumour. That’s where the analyzer comes in.

There’s no one genetic label for a cancer stem cell, said Benoît. Looking at more than 10 labels at a time is difficult, but this machine will be able to view up to 20 labels simultaneously to narrow the search for cells that are at the heart of tumours. Benoît also said that the analyzer will greatly increase the chances of finding cancer stem cells, which will help in creating treatments.

Cancer stem cells were originally discovered by Canadian researcher Dr. John Dick, the current Cancer Research Chair in stem cell biology and a professor at the University of Toronto. In 1997, he reported his observations of stem cells in tumours within certain types of leukemia. His research found tumours aren’t just made up of one type of cell and his findings would go create a new branch of cancer research. Benoît said that one in 52,000 tumour cells is also a cancer stem cell.

Benoît said his trainees have been instrumental in his ongoing work to improve cancer treatments.

One of them, Chris Bergin, has been working with Benoît since last December. Bergin, 24, is a PhD student in the university’s Cellular and Molecular Medicine program and he’s looking to see how current drugs affect the growth of cancer stem cells.

While a desire to contribute to future cancer research has been Bergin’s main motivation, he also likes being able to see the disease up close.

He works alongside Angelique Masibag, 23, a master’s student at the university. Masibag has been at the Benoit Lab for a year and helps Bergin with his drug research, while also working on growing colon cancer cells for their experiments.

“It’s going pretty good so far [there’s] a lot of exciting data we’ve been getting” said Masibag of the research. She’s also been working on figuring out which protein on the surface of a cancer stem cell is essential to proliferation.

Benoît said that ultimately, finding new treatments that will attack only cancer stem cells and leave normal cells untouched to give patients a better quality of life has driven his work. And while there has been progress when it comes to finding new treatments, Benoît said that his research and the ongoing field of cancer research is general needs to continue growing.

“We are very happy to see those discoveries, but we don’t want to close the shop,” he said. “The more we have in our arsenal, the better the treatments.”