4 days ago 0 6 min read
We use cookies to provide a personalized experience for our users. By continuing to browse this site, you give consent for cookies to be used.
Got it!
Home > Top Stories > Ottawa BlackJacks hope ex-NBA talent will lead way to 2022 CEBL championship 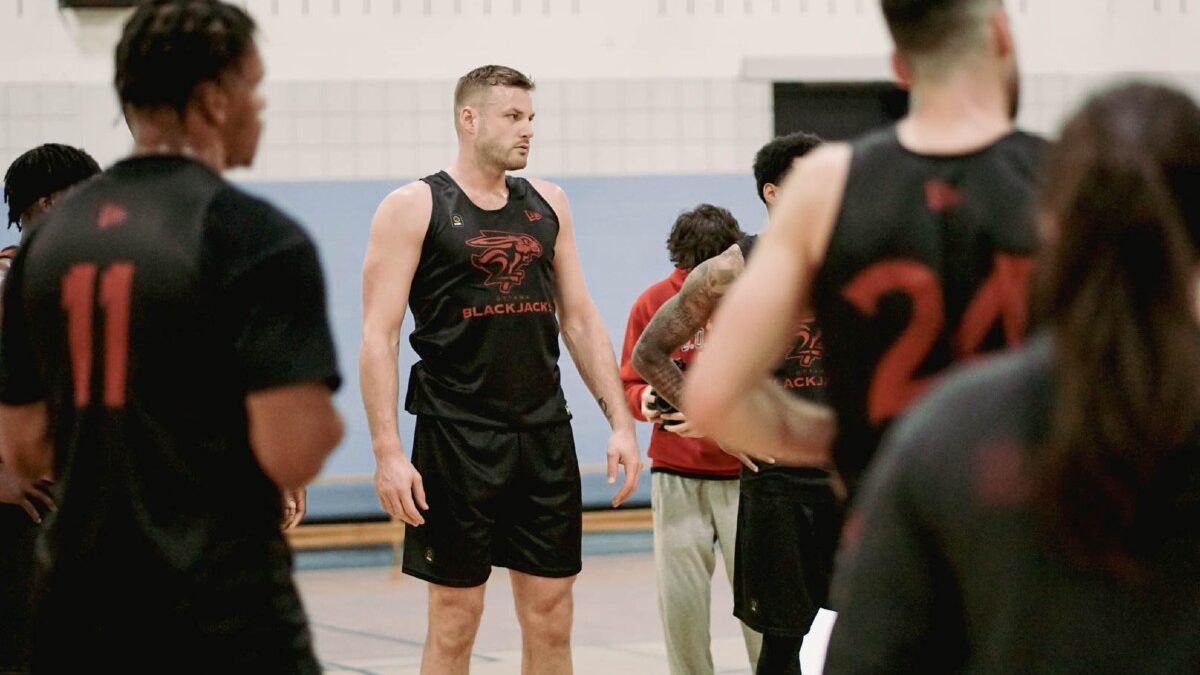 How much does Ottawa BlackJacks guard Walt Lemon, Jr. know about the Canadian Elite Basketball League?

“Honestly, I don’t know anything about it,” he said during the BlackJacks’ media day on May 16. “This is my first time playing.”

The 29-year-old Lemon, who played 11 games for the NBA’s New Orleans Pelicans and Chicago Bulls in 2018 and 2019, is part of a growing contingent of international players taking a chance on the CEBL now in its fourth season.

The BlackJacks, who joined the CEBL in 2019 and recorded four wins and 10 losses in 2021, lost their season opener against the Fraser Valley Bandits on May 25 at TD Place Arena. It followed a miracle run for the team in the 2021 playoffs, when they fought through a COVID-19 outbreak and upset the third-place Hamilton Honey Badgers 96-94 in the quarter-finals.

In the semifinals, Ottawa lost by seven points to the Edmonton Stingers, the club that won the Canadian pro basketball championship in a 36-point blowout over the Niagara River Lions.

Much has changed for the BlackJacks and the league since the playoffs last August. Amid a COVID-19 crisis in the NBA in December 2021 and January 2022, five CEBL alumni debuted in the NBA, becoming the first players in league history to do so.

Wigginton, a 6-foot-1 native of Dartmouth, N.S., became the first CEBL player to sign a standard NBA contract after playing in the Canadian league.

Wigginton’s deal with the Bucks — along with shorter-term NBA contracts signed by four other CEBL players — prompted league commissioner and chief executive Mike Morreale to boast in January: “This is important history for our league, and we couldn’t be prouder. This is a true reflection of the opportunities a domestic league can make in this country.”

The CEBL is now the largest pro sports league in Canada by expanding from seven to 10 teams, adding clubs in Montreal, St. John’s and Scarborough, Ont. to surpass the Canadian Football League’s nine-team total. Along with Ottawa, the league’s other teams are located in Edmonton, Saskatoon, Guelph, Hamilton, St. Catharines, Ont., and Langley, B.C.

That signing is just the latest indication that the CEBL is now on the radar of pro basketball players from around the world.

“Honestly, I don’t know anything about it. This is my first time playing.”

For the BlackJacks’ part, their plan is to carry the momentum of an ambitious playoff run in 2021 to this year’s championship tournament. As hosts of the 2022 CEBL championship weekend in August, the BlackJacks have an automatic berth in the season finale.

The team with the best regular season record will join Ottawa as automatic qualifiers for the four-team championship weekend.

The top four teams in the regular season standings will play quarter-final matches in advance of the championship event to determine which other two clubs will advance to one of the two semi-final games to be held in the nation’s capital.

The Aug. 17-21 weekend is being billed as a milestone moment for professional basketball in Ottawa. The three games will be aired nationally on CBC TV, and the CEBL has touted the championship round as a “five-day festival” to be hosted by the BlackJacks in partnership with the City of Ottawa, Ottawa Tourism and Ottawa Sports & Entertainment Group, which operates the city-owned arena.

“The celebration of basketball, music, and local culture will feature concerts, street festivals, the CEBL Awards Gala, and several legacy projects to be announced at a later date,” the CEBL has stated.

The Lemon acquisition is key to the BlackJacks’ championship bid this season.

“Walt is a leader and a hard-nosed competitor with games played in the NBA, the NBA G League, in Europe and in Asia,” the team’s general manager, Jevohn Shepherd, said in announcing the signing earlier this year. “We are excited about the wealth of experience we gain having him join our club. Walt has the ability to get to the rim to score and make plays for others. We believe that it will translate well with the CEBL style of play.”

Lemon said at the time he has “heard great things about the city and I’m looking forward to going to work with the rest of the team.”

The BlackJacks have taken other steps to bolster their lineup for the 2022 season. Along with adding Lemon to the roster, the club has signed forward Deng Adel, a forward who played 19 games with the Cleveland Cavaliers in 2018-19.

“Top-end talent in this league goes a long way,” said BlackJacks head coach Charles Dubé-Brais. “They carry their teams, so we felt we needed to add a few guys who could do that.”

Also on the BlackJacks’ training camp roster is Carleton Ravens guard Aiden Warnholtz, who signed a developmental contract with the team.

“We are excited about the wealth of experience we gain having him join our club. Walt has the ability to get to the rim to score and make plays for others. We believe that it will translate well with the CEBL style of play.”

“He’s a really good guard,” said BlackJacks and University of Saskatchewan guard Nervens Demosthene, who played against Warnholtz in the U Sports national championship final last month. “It’s going to be a tough matchup during the training camp, for sure.”

The BlackJacks have also signed Carleton legend Thomas Scrubb, who won five national championships with the Ravens between 2011 and 2015 and two U Sports Defensive Player of the Year awards.

One player Dubé-Brais anticipates being a leader on the BlackJacks roster is Chad Posthumus. The 6-foot-11, 265-pound forward played two games for Ottawa in 2021 as a last-minute replacement during the playoff COVID-19 outbreak and is a “big goofball and a big teddy bear.”

Dubé-Brais said Posthumus was the last player to arrive ahead of training camp when his connection from Toronto landed in Ottawa after midnight. But when Posthumus saw his head coach waiting in the hotel lobby, “his energy level was probably a 67 out of 10,” Dubé-Brais joked.

“It was, like, insane. He almost broke me in half hugging me,” said Dubé-Brais. “He’s just that type of person.”

Ahead of the BlackJacks’ season opener against the Bandits on Wednesday, the team members are focused on getting to know each other better.

“The biggest thing right now is just us trying to learn how to play together as quick as possible,” said forward Tyrell Green. “Every team for the most part starts new each year, so it’s all about which team can get chemistry the fastest.”