4 days ago 0 6 min read
We use cookies to provide a personalized experience for our users. By continuing to browse this site, you give consent for cookies to be used.
Got it!
Home > Arts & Culture > Orange Art Gallery rallies support for Ukraine with exhibition and silent auction 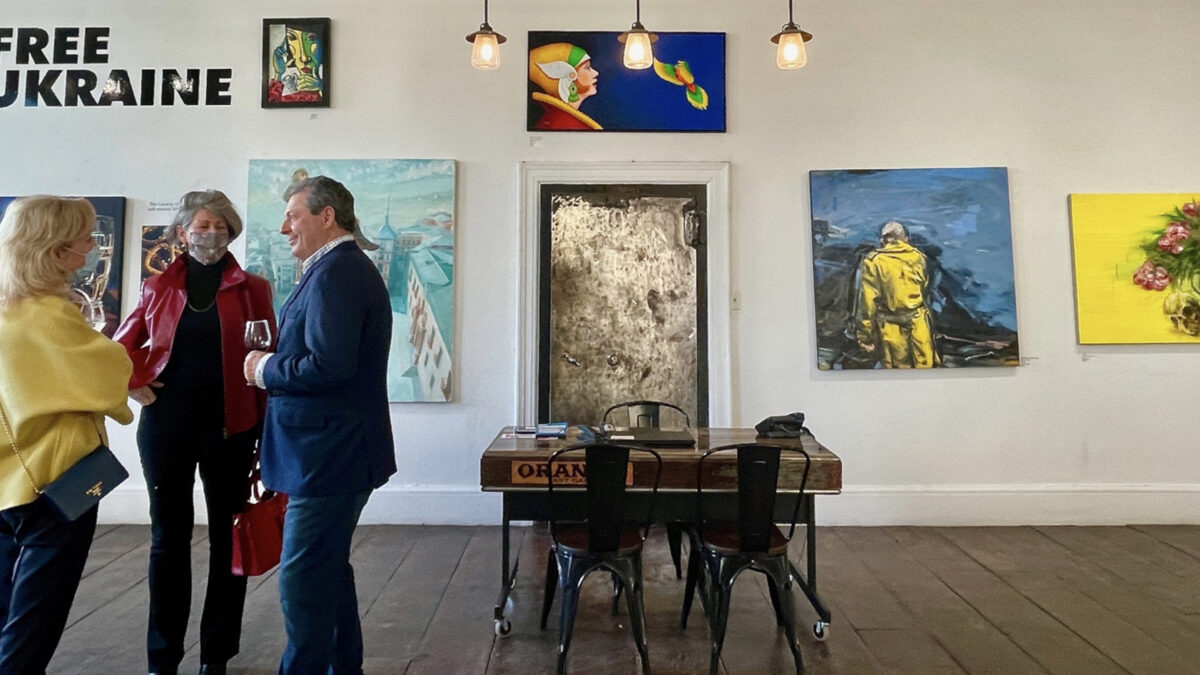 Yellow and blue carpets, flags, clothing and paintings filled the Orange Art Gallery for the opening of a special exhibition on March 31. The gallery was alive with the culture of Ukraine, from homemade perogies to Ukrainian music filling the silence.

The gallery’s “Free Ukraine” exhibition and silent auction aimed to raise donations for the Canada-Ukraine Foundation. The Centretown gallery said it would be donating the proceeds from the bar and 20 per cent of all sales for the exhibition’s three-week run to April 17.

“I heard that (the CU Foundation) needs money right away to help the refugees and this one struck me as a good one where most of the proceeds go to the actual cause,” said Ingrid Hollander, owner and art consultant at the Orange Art Gallery.

Hollander said she could not sit back in the face of recent atrocities in Ukraine, and with COVID-19 mandates lifting and an open venue space available, the way to help was clear.

It took one week to put together the exhibit that featured creations by many of the 27 artists that work with the Orange Art Gallery.

“Just from watching TV, I find it just absolutely terrible,” said Hollander, referring to Russia’s brutal invasion of Ukraine. “I thought it was for many reasons a good time to have people come together and everybody kind of wants to help out,  too.”

Orest Sklierenko, president and CEO of the CU Foundation, said the “fulsome” support of local businesses, foundations, corporations and communities has been greatly appreciated by the organization and the people of Ukraine.

But as the illegal Russian invasion continues to inflict horrific damage on Ukraine, so does the need for more help.

“Unfortunately, the need has grown considerably and more than 10 million people have been either stuck in their cities with supplies of food cut off or displaced from their homes, had their families separated and torn apart,” Sklierenko explained.

“This is Europe’s largest humanitarian crisis since World War II,” he added, “and they’re going to have to go back and rebuild their lives and the country when the shelling and the bombing stops.”

Since the first week of the invasion in late February, the CU Foundation has been supplying food, hygiene supplies and medicine kits to Ukraine. With donations such as the one provided by the Orange Art Gallery, the Ukrainian people are receiving more of the crucial supplies they are in desperate need of.

One of the featured artists in the show was Ottawa’s Lorena Ziraldo. Several of her paintings were on display, and her piece Bart’s Hero was sold for $375 in a silent auction on the exhibit’s opening night.

Ziraldo’s oil-on-canvas titled The Power of Yellow and Blue was an unfinished painting that she also created for the exhibit.

“When Ingrid saw it, it was beyond perfect. The man walking could be aimless, it could be like an explosive landscape; but it could be whatever people thought.”

“This is Europe’s largest humanitarian crisis since World War II, and they’re going to have to go back and rebuild their lives and the country when the shelling and the bombing stops.”

— Orest Sklierenko, president and CEO of the Canada-Ukraine Foundation

Her Bart Simpson painting was a more positive piece of work with a reference to Ukraine. “I had this Bart painting because I like The Simpsons, so I thought: ‘Why don’t I do something with him?’ ” Ziraldo said, explaining how she added an image of Ukraine president Volodymyr Zelensky to the painting. “I did think of the war, or am thinking of the war pretty constantly, but I still wanted it to be positive for Ukraine — believe that the outcome can go their way, somehow.”

Hollander and her family have owned the gallery for about 12 years and according to Hollander, it’s been a joy to have the family working together.

“I was in the military for three years and I remember when I was in Winnipeg for the floods. The Ukrainian community came together, and they hosted this really amazing and fun night while we were in Manitoba,” said Hollander. “There were dancers and food and it always stuck with me.”

“The incredible outpouring of support, understanding and empathy has helped feed the positive. I would say we’re into the hundreds of thousands of people that have in some way, shape or form given towards this cause,” Sklierenko said. “We feel that support from across Canada is super important, no matter if it’s a few $100, or several $100,000, or millions in the case of some of the bigger donors. But it all helps.”