2 weeks ago 0 8 min read
We use cookies to provide a personalized experience for our users. By continuing to browse this site, you give consent for cookies to be used.
Got it!
Home > News > Social Issues > Ottawa-Carleton Detention Centre on trial over ‘horrendous’ conditions 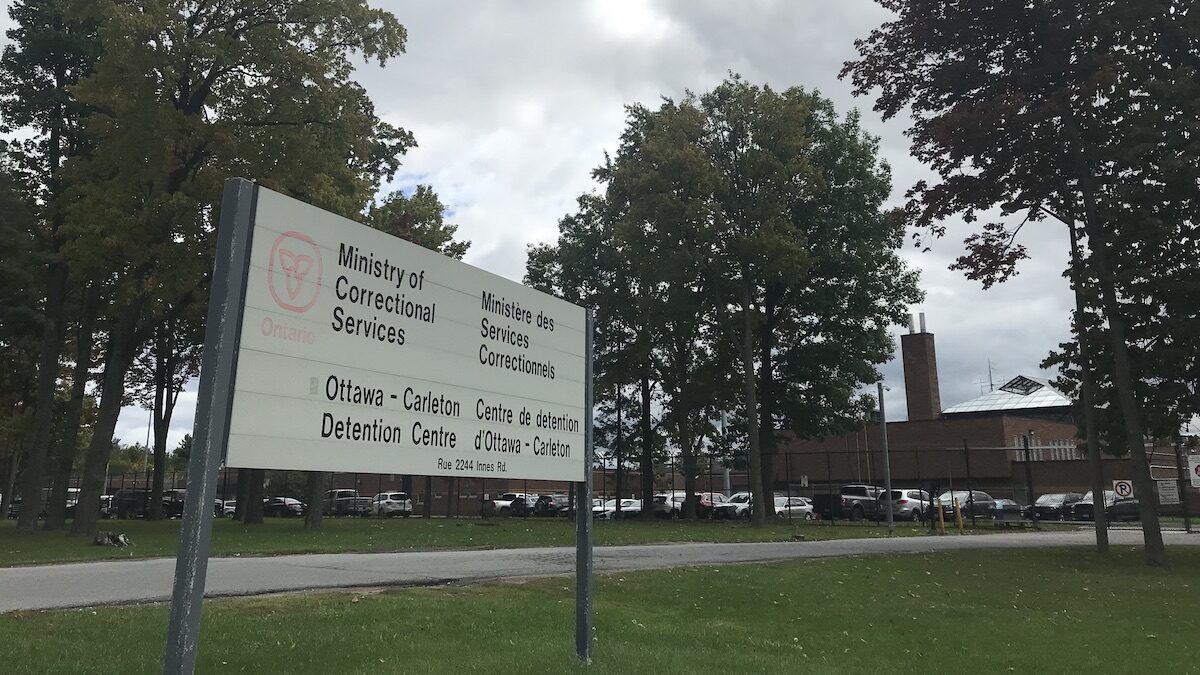 Deepan Budlakoti’s lawsuit against the Ottawa-Carleton Detention Centre is being heard at Ottawa's provincial courthouse until Oct. 1 and is challenging prison conditions under multiple sections of the Canadian Charter of Rights and Freedoms. [Photo © Jaclyn McNeil]
Community

The Ottawa-Carleton Detention Centre is in a legal spotlight during a lawsuit launched by an incarcerated man for alleged violations of his Charter rights.

Deepan Budlakoti claims to have suffered inhumane conditions and treatment in Ottawa’s main jail on Innes Road. ​Budlakoti alleges his treatment in the OCDC has harmed his physical and mental health, said University of Ottawa law professor Justin Piché.

“The systemic neglect of the constitutional protections that no one should be denied, even while imprisoned, is clear,” Budlakoti wrote in the Ottawa Citizen in July.

“He is raising a number of different issues that impact not only him, but all prisoners that are being held,” said Piché. Some of these issues include alleged instances of excessive force, segregation, lack of privacy in regards to medical care and food concerns.

Vanessa Fareau, a woman who was held at the jail in 2015, said she agrees that the conditions at OCDC are cruel. “There’s an overall disrespect for human life at OCDC,” said Fareau. “I’m happy that these issues are coming to light. I wish more people were made aware of it.”

Budlakoti is representing himself during the trial while he remains incarcerated.

“I’d say he’s doing about 95 per cent of the work on his own,” said Piché. Budlakoti is receiving some guidance from members of the academic community, but does not receive help collecting evidence or appearing in court, added Piché.

Fareau said she’s keeping up with the trial over Zoom. “I am beyond impressed that Deepan has done all this while being incarcerated with no legal background,” she said. “It’s very motivating. I wish I had done something like this years ago.”

Stacy Douglas, a law professor at Carleton University and close friend of Budlakoti, said he has faced many barriers bringing his case forward.

“As a person who is currently incarcerated, there are so many risks,” said Douglas. “I mean … it’s not like the guards (at the prison) don’t know what’s going on.”

Ontario jails have a history of intimidation directed at those who challenge the system, said Fareau. “I know what happens when you try to bring light to the conditions,” she said.

Fareau said she saw people at OCDC experience difficulty when trying to speak to a representative about their rights. “It’s a blue form you can send to contact a jail mediator. If there was a search and you had one of those blue forms, forget it. They would throw all your stuff away.”

Fareau attempted to file a lawsuit against Quinte Detention Centre in Napanee while she was detained there, she said. “After I called a lawyer, they started telling all my visitors that I didn’t want any visits at the moment.”

Douglas said she has witnessed a comparable withholding of privileges with Budlakoti. “One of the things I certainly noticed with Deepan is that he feels he’s been specifically targeted,” said Douglas. “His mail goes through and some things don’t get to him.”

“I can’t imagine what kind of repercussions he’s facing every time he leaves the court house and goes back to OCDC,” said Fareau.

This is not the first time Budlakoti has challenged the system, said Douglas. Budlakoti fought to be reinstated as a Canadian citizen after his citizenship was revoked in 2012.

Budlakoti’s parents were working in the Indian embassy around the time of his birth in October 1989, said Douglas. His passport was granted in error because there is a subsection of the Citizenship Act that states if your parents are diplomatic staff at the time of your birth you are not a Canadian citizen, said Douglas.

Budlakoti challenged this by claiming his parents were not employed at the Indian embassy on the exact date of his birth, which was confirmed by the records kept by the embassy, said Douglas.

Despite being born in Ottawa and never having lived anywhere else, Budlakoti did not regain Canadian citizenship in 2014, said Douglas.

“The Canadian state has decided it is reasonable to hang a person’s entire life on a difference of opinion,” said Douglas.

Budlakoti has been incarcerated at OCDC for four years, but has not yet been convicted of the charges that brought him there, said Douglas.

Budlakoti was charged with 18 firearms charges after allegedly selling ammunition, machine guns and hand guns to an OPP informant between June 30 and Oct. 5, 2017, according to the Ottawa Citizen.

“He’s told me both in person and on the phone about the horrendous conditions, and of course I’ve seen it on his body when I go to visit him at OCDC,” said Douglas. “His condition… he’s lost a lot of weight. He looks very different than he did before he went in the prison.”

Inadequate food standards are among one of the many violations that Budlakoti has alleged in his lawsuit, said Piché. Budlakoti has claimed in court that he was not given food that meets his medical and religious halal specifications. “Folks who are behind bars are often living with medical issues more so than the general population, so issues around diet are extremely important,” said Piché.

As a vegetarian, Fareau said OCDC very rarely provided meat-free options and she would sometimes have to eat a packet of crackers for dinner.

“It’s really unfortunate that we can’t do better for people who are incarcerated,” said Douglas. “They have no other option than to eat what is put in front of them.”

Budlakoti claimed in court that his treatment by staff members at OCDC is a main concern. “Everything is an annoyance to them,” said Fareau. “I would ask a simple question and be cursed at.”

“A lot of people are coming from serious trauma. To treat people like that, period… it’s just not right,” said Fareau. “They should be the calm for people’s storm but instead they’re the extra hurricane.”

“My physical and mental health has eroded. This makes me wonder how many more individuals aren’t receiving adequate care in this dungeon,” Budlakoti wrote in Ottawa Citizen, referring to the lack of medical care in OCDC, which is another main concern in the ongoing trial.

“OCDC was just coming out of a period of staff shortages,” said Jesseman, referring to OCDC mandating an increase in staff hiring in 2013. “There were continuing challenges with the institution itself being an aging facility and upkeep to continue to meet the needs of the staff and inmates.”

The Community Advisory Board was disbanded in June ending routine assessments of the detention centre, said Jesseman.

In response to the report made by the Community Advisory Board and ongoing complaints by those held at the jail, OCDC created a task force in 2016 to address the claims of “unacceptable” conditions, said the Ministry of the Solicitor General website.

The task force primarily addressed concerns of overcrowding in the jail and “long-term solutions to improve the health and safety of inmates and staff,” the ministry stated.

The task force also focused on improving access to health care for those who are incarcerated, which was one of the failings alleged by Budlakoti in the ongoing trial. “All new correctional officer recruits now receive mental health training,” said the ministry.

Budlakoti says access to medical care and mental health treatment continue to be issues at the detention centre. “There’s still only one mental-health nurse for hundreds of prisoners in OCDC,” said Budlakoti in his July article in the Citizen.

“I think it is an important case to follow. It has important ramifications,” Piché said of Budlakoti’s ongoing challenge of the Innes Road facility. “If Deepan wins, it has the potential to usher in a number of reforms to reduce the harms of imprisonment.”

Budlakoti’s final court appearance is Oct. 1 from 10 a.m. to 4 p.m., according to the Criminalization and Punishment Education Project website, where the Zoom link to the court proceedings is provided.