6 days ago 0 5 min read
We use cookies to provide a personalized experience for our users. By continuing to browse this site, you give consent for cookies to be used.
Got it!
Home > Sports > Soccer fans push for new pro club after Fury FC’s demise 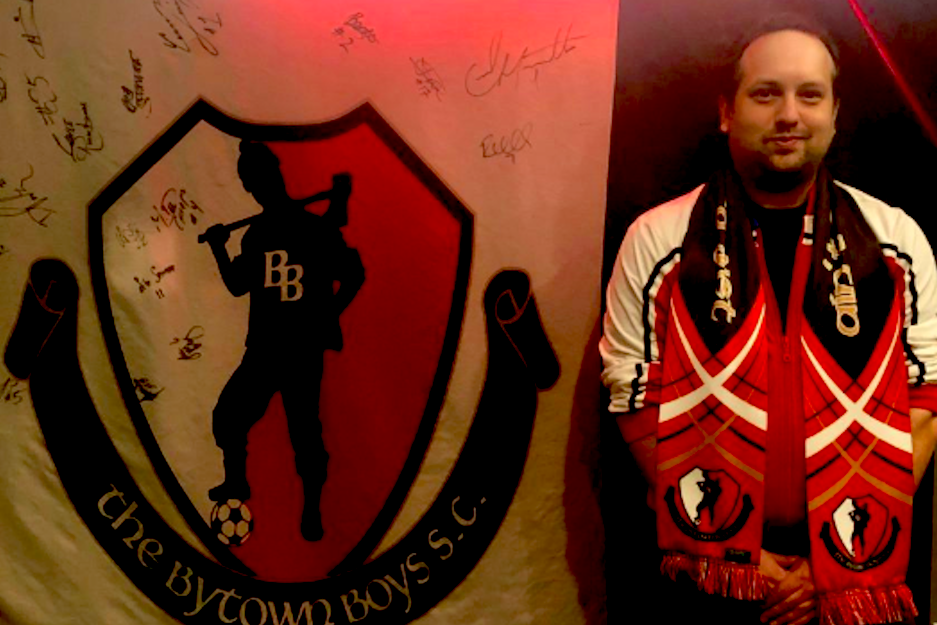 Stephane Brisson-Merrick stands with the flag of the Bytown Boys Soccer Club. His group is among those hoping to bring professional soccer back to Ottawa. [Photo courtesy BBSC]
Soccer

Just days after it was announced that the Ottawa Fury FC would be suspending operations, the local soccer community began a campaign to bring a professional soccer team back to Canada’s capital.

One of the first initiatives started on Twitter, when the account @Ottawa2CPL was created on Nov. 9 to voice the desire of former Fury fans for the prompt return of pro soccer.

“We will not be silent. We will be relentless,” vowed one tweet. “The beautiful game needs to be back in our Nation’s capital.”

A petition and Facebook page followed the next day.

Mathieu Boutin, creator of the account, said that, after discussing the club situation with friends, he knew it was time for action. “It was just kind of a ‘go’” moment.

Fury FC had been around since 2011 and played in both the North American Soccer League and the United Soccer League, with Keith Harris Stadium at Carleton University and TD Place at Lansdowne Park acting as home turf.

But in the eyes of the support group and its 575 followers (as of late November), the next best option now could be to have a local men’s club join the Canadian Premier League or to promote a women’s team in the National Women’s Soccer League.

One organization working alongside Boutin’s group is the Bytown Boys Soccer Club, led by Stephane Brisson-Merrick.

Brisson-Merrick said the BBSC prides itself on supporting Canadian soccer at both the national and club level.

“We’ve always been about supporting the sport — not a team — but the sport, and making new friends, reaching out and making a community,” said Brisson-Merrick.

Looking ahead to the 2020 season, the BBSC had been planning to elevate the atmosphere at Fury games and enhance the soccer fan experience with more meet-up events.

When the news came that the Fury was shutting down, said Brisson-Merrick, it was “devastating.”

As a result, the BBSC decided to partner with @Ottawa2CPL to push for the return of pro soccer and to recreate the community of fans that had supported the Fury.

“How do we keep what we built going?” asked Brisson-Merrick. “We built something good at its core. Why should we let it die?”

Some fans, however, aren’t sure joining the CPL is the right move. The fledgeling league — which has seven teams spread across the country — just completed its inaugural season.

Ottawa soccer fan Coleman Swartz is one of those concerned.

As a lifelong soccer player, he said when he heard about the Fury folding he was “disappointed”, but he’s not yet convinced the CPL is the best option.

However, it might be the only one.  “I don’t know what to think, because part of me said: ‘I don’t know about the CPL to have enough confidence it in to say that’s what we should have,” he said.

“We were the last Canadian team in the entire USL (United Soccer League),” said Swartz. “So in some ways, I’m not surprised they got pressed out. Do I like it? Not necessarily. Do I think the CPL is the best way to go? Not necessarily, but at this point, it’s the only way to go.”

Regardless of split views and the debate over which league to re-start in, Boutin explained that the end goal for the Twitter group remains the same.

“The end goal is to get pro soccer back in the city, to get back these moments. Me with my kids … people that had season tickets, supporters chanting,” said Boutin.