2 weeks ago 0 1 min read
We use cookies to provide a personalized experience for our users. By continuing to browse this site, you give consent for cookies to be used.
Got it!
Home > Arts & Culture > Ottawa’s new central library: Will it stack up? 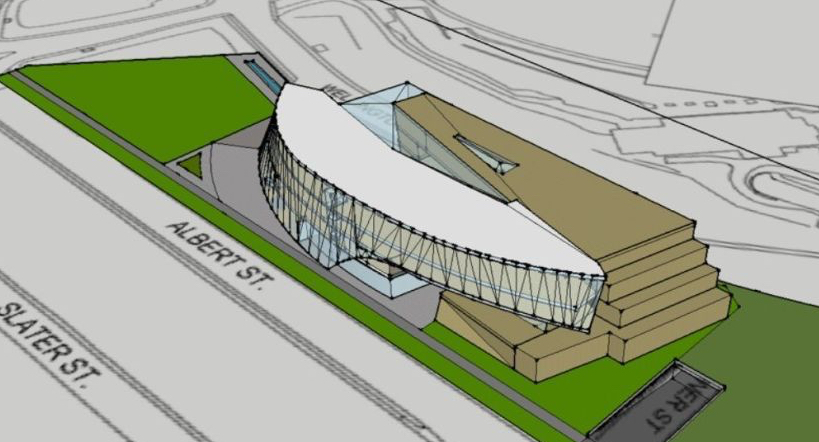 This is an early rendering of what the new central library might look like. Courtesy Ottawa Public Library
Arts & Culture

Ottawa’s new central library: Will it stack up?

Samples of wood are spread across the table – six-inch square blocks of unpolished spruce, western red cedar and white ash. Sarah Simpkin pores over each one, carefully considering how they play on her senses.

Gathered at her table – one of 20 – are nine others who have trekked to Library and Archives Canada for the last of 12 public design consultations for the new main branch of the Ottawa Public Library (OPL).

Simpkin suggests tailoring spaces for different noise levels in the new building and providing storage space for researchers coming from across Canada.

Simpkin said she uses the library all the time, mostly for cookbooks and eBooks.

Simpkin is just one of some 2,800 community members who joined the public consultation process for the new library, slated to open in 2025.

A preliminary blueprint for the building was released in November. The new library will be shared by OPL and Library and Archives Canada (LAC).

It will replace the current main branch at the corner of Metcalfe Street and Laurier Avenue West.

That building, opened in 1974, struggles to accommodate 2,000 daily visitors and to meet modern needs.

The change is long overdue: At one public consultation, one disgruntled community member commented: “Look at the current main branch, and do the exact opposite.”

Slated for 555 Albert St., the new branch will be five storeys tall and is expected to welcome up to 5,000 visitors a day. It will feature a genealogy centre and a gallery. An outdoor children’s area is planned for the second floor, and the fifth floor will house a rooftop café and terrace.

With a price tag of $193 million and years in the making, the new library will be an important institution in the nation’s capital when it opens in 2024 or early 2025. Ottawa will joins the transformation of libraries in the digital age. In recent years, cities from Calgary to Halifax have opened new libraries that had addied gaming stations, auditoriums, music studios and children’s active play structures.

Now all eyes are on Ottawa, as the capital braces to bring this 113-year old institution into the 21st century. Will Ottawa’s venture have the “wow factor” it needs to make its mark?

Architect Don Schmitt thinks so. He’s the lead architect for Diamond Schmitt Architects, the firm designing the building, along with Ottawa’s KWC Architects.

It’s a momentous task, he said.

“Libraries are more important than ever; they’re more popular than ever, they’re more busy than ever,” he said. “They’re the sort of cathedrals of our era, in the sense of the really important buildings that … dominate the community – dominate in a positive way.”

Libraries have changed dramatically in the past 50 years, he noted. “That’s the challenge,” said Schmitt. “You’re sort of figuring out a typology of public building which doesn’t exist yet.”

The design for Ottawa’s new library will be distinctive, said project manager Simon Dupuis, noting that architects have forgone bland, boxy designs for a dramatic building shape. Initial drawings show a curved wall running the length of the building along Albert Street, with the five floors creating a tiered slope on the east end of the building.

The building will echo the surrounding landscape in other ways as well: “We … want the character of the building to really be drawing clues from what makes Ottawa unique; its history, the kind of wood that is part of its industrialheritage, the natural features which so much define this part of the city,” said Schmitt.

The designers even wove these considerations into the location of the library’s front door. Would library users come from downtown, the Pimisi LRT station or the path by the river?

“The obvious answer that came back from all kinds of conversations in the first session was, there should be doors all over,” said architect Sydney Browne.

Now the library has three principal entrances, a unique feature as libraries traditionally had one main entrance to control the flow of library materials in and out of the building.

“We also want it to be completely inclusive, in the sense that it welcomes every member of the community, disadvantaged or not,” said Schmitt.

The library will feature large, central, easy-to-find elevators and graded ramps to accommodate the slope of the Albert Street site.

“What will make this building different from others, I think, is we’re trying to kind of push that envelope of community and gathering and diverse uses possible within the building as far as anybody has gone,” said Schmitt.

But not everyone is thrilled with the library project.

“I’m concerned that it’s not going to measure up,” said Emilie Taman, former spokeswoman for Bookmark the Core, an advocacy group that fought to have the library built in Ottawa’s traditional downtown area.

“I don’t want to be cynical, but other cities in recent years have had really exciting library projects,” she said. “Essentially, the size that (Ottawa planners have) chosen is about the same as the Halifax Central Library – which is a great library – but it’s a city about the third of our size, and this is a central library in the national capital.”

The new Ottawa library is to be 216,000 square feet. Earlier this year, the city of Ottawa officially reached a population of one million. Halifax’s library is 129,000 square feet, serving the city’s 430,000 residents.

Taman said she’s concerned the size, location and budget will impair the new library’s ability to meet the needs of residents and to project a vision for a world-class library.

“I think it will be better than the main branch we have now, but that’s a pretty low bar,” she said.

The Halifax Central Library, a $37-million project, opened in December 2014. Featuring the “Halifax Living Room” with panoramic views of the city, the building won a Governor General’s Medal for outstanding design of a civic building.

The Calgary Central Library also received praise when it opened in November 2018. The library sits directly over the city’s LRT line and welcomes 670,000 active cardholders – over half of the city’s population.

Will Ottawa’s new library be able to offer the innovative programming and collections that users expect in the modern age?

“Making sure we have the dedicated spaces for those programs will be a huge step for us,” said Yarrow.

The new building will give the OPL an opportunity to rejuvenate its collection and programs, she noted. That’s no small task: There are 1.86 million items in the OPL collection, and 14,800 programs were offered last year, according to the OPL’s 2018 Annual Report.

Even though the new space will be larger, the book collection will shrink, said Yarrow. Staff are refreshing the collection to avoid duplication and ensure items will be useful.

“The collection is still really core to our mandate, and ultimately, we’re a community of readers first and foremost, but not exclusively anymore,” said Yarrow.

In recent years, the collection has expanded to include new items such as musical instruments and video games.

“The old-media/new-media thing really interests me — the kind of intersection of honouring and integrating the older tools along with some of the newer technologies,” said Yarrow.

It remains to be seen whether the OPL will embrace cutting-edge programs such as Carleton University’s Discovery Centre, which encourages collaborative learning for undergraduate students. Launched in 2013, it features gaming and multimedia laboratories, treadmill desks and 3D printing. In 2015, the library added its Emerging Technology Collection, which allows users to borrow a wide range of items: Raspberry Pi and Arduino programming boards, cameras, virtual reality technology, telescopes, drawing tablets, audio recorders and synthesizers, video game gesture-control equipment and more.

The school also allows community groups outside the university to borrow items from the collection, said a study in the Canadian Journal of Library and Information Practice and Research. The study noted that damage and lost parts have not been a significant issue.

Meanwhile, Ottawa residents are waiting for the next stage of the new library project, when the detailed design phase wraps up in March.

Sarah Simpkin, for one, is optimistic that the new library will be worthy of the nation’s capital: “I think it’s really going to bring people together,” said Simpkin. “Any time that there’s a sort of new and exciting architecture, it really puts Ottawa on the map, and I think it could be something that we’re really proud of as a city.”