1 week ago 0 1 min read
We use cookies to provide a personalized experience for our users. By continuing to browse this site, you give consent for cookies to be used.
Got it!
Home > News > Ottawa > Public input helps shape design of Ottawa’s new central library 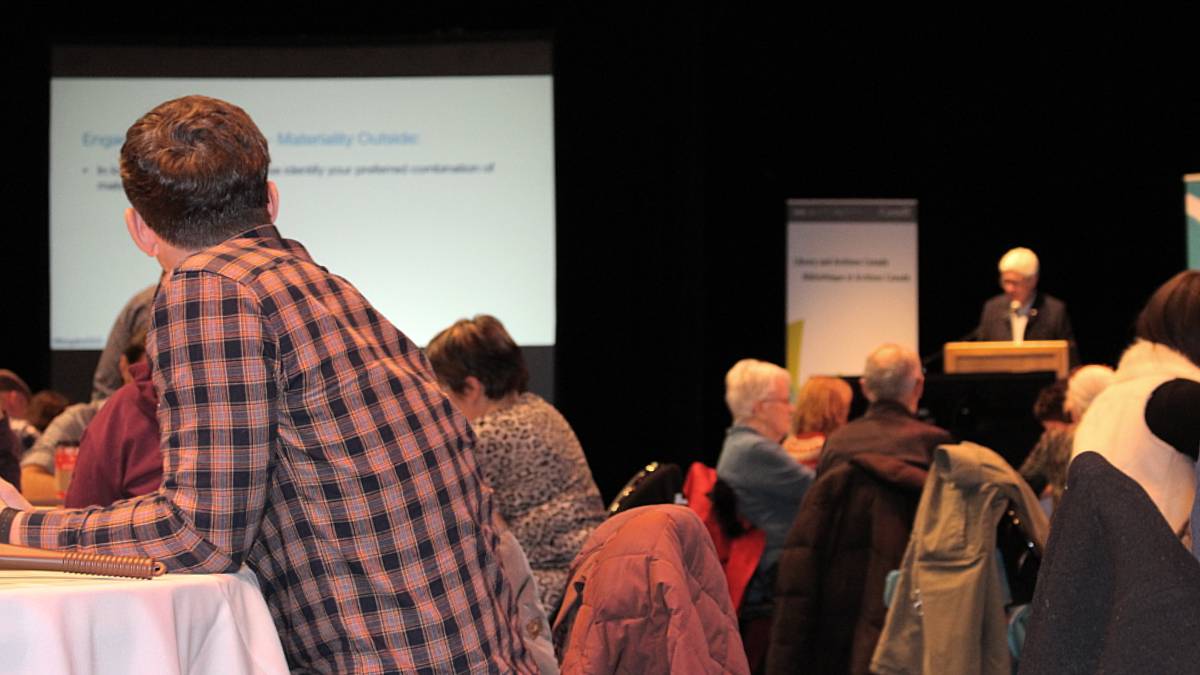 A participant in the Inspire555 workshop, “Iconic Features and Finishing Touches”, observes a public presentation at the Shenkman Arts Centre on November 18, outlining the design of the new OPL-LAC joint facility. [Photo @ Kaylee Goldman]
Architecture

Members of the public gathered at the Shenkman Arts Centre in Orleans on late last year to take part in a process that has sought citizen input in the development of Ottawa’s new central library .

That night community members discussed the final, pre-design stages of the project.

The new Ottawa Public Library-Library Archives Canada joint facility, is scheduled to open in 2024. It will be built on the eastern edge of LeBreton Flats at 555 Albert St., between the Pimisi LRT station and Bronson Avenue.

The City of Ottawa has hired a design team that includes Toronto’s Diamond Schmitt Architects, Ottawa’s KWC Architects, and Jason Bruges Studio from the U.K.

The five-storey facility is expected to cost $192.9 million and will become the main public face of Library and Archives Canada as well as the main branch of the Ottawa Public Library.

Public involvement is an important component of the development, the designers say. Inspire555, a series of engagement activities designed to gather local input to help shape the project, has included multiple sessions over the course of 2019.

The final workshops — Iconic Features and Finishing Touches — took place during a three-day period in mid-November. A design is expected sometime in January.

The workshops allowed the citizens to hear presentations about the institution while sharing reactions and ideas with other participants. There were a variety of materials to interact with as facilitators from Library and Archives Canada monitored the discussions in order to pass along information gathered to the design team.

Ralph Wiesbrock, a partner with KWC Architects, outlined the significance of including public opinion in the development process of the OPL-LAC joint facility.

“It’s important to capture the opinions, ideas and inspirations from the public,” said Wiesbrock. “The design process doesn’t happen in a vacuum, and if we did wilfully design the building without public input, it would be guaranteed to be a failure.”

The shift from print to digital has a significant impact on what content libraries will offer, making technology an important consideration in what the OPL-LAC facility will provide to users.

He added: “It’s a very intense project, but that’s also what makes it so exciting and unique.”

Thought has also been given to the art installations that will be implemented, with international influence from the London-based Brudges studio.

Richard Roberts, the studio’s design director, spoke about the role art installations will play in the joint facility.

“What we produce are typically technology-based, interactive pieces that are quite site-specific for each individual project,” said Roberts. “Our work is quite contextual in a way, so we’re looking at a bunch of themes at this point to tie in with the building, and one of the themes we’re looking at is . . . confluence.”

The building is not only intended to become a well-known landmark both locally and nationally, it’s also being planned to offer unique spaces to the public.

Judith Tompkins said she hopes the new facility will be “a really welcoming centre that draws people in.”

As the project will not be complete for another five years, Tompkins said she expects the library to reflect the digital age.

“I think the libraries will change and become more technology driven and compatible with the technology of the future,” she said. “We need to have publications of different print sizes and languages that appeal to a broad audience, and that takes us to the future.”

She expressed her appreciation for the workshops that Inspire555 have provided, allowing her voice to be heard.

“For me, it was actually quite rewarding and pleasurable to hear others speak about what they feel passionate about in a library,” Tompkins said. “I think they really solicited our input. They actually listened,” she added.

Ottawa's new central library: Will it stack up?