6 days ago 0 8 min read
We use cookies to provide a personalized experience for our users. By continuing to browse this site, you give consent for cookies to be used.
Got it!
Home > News > Ottawa > Perfect weather driving massive crowds to apple orchards, forcing managers to tighten COVID rules 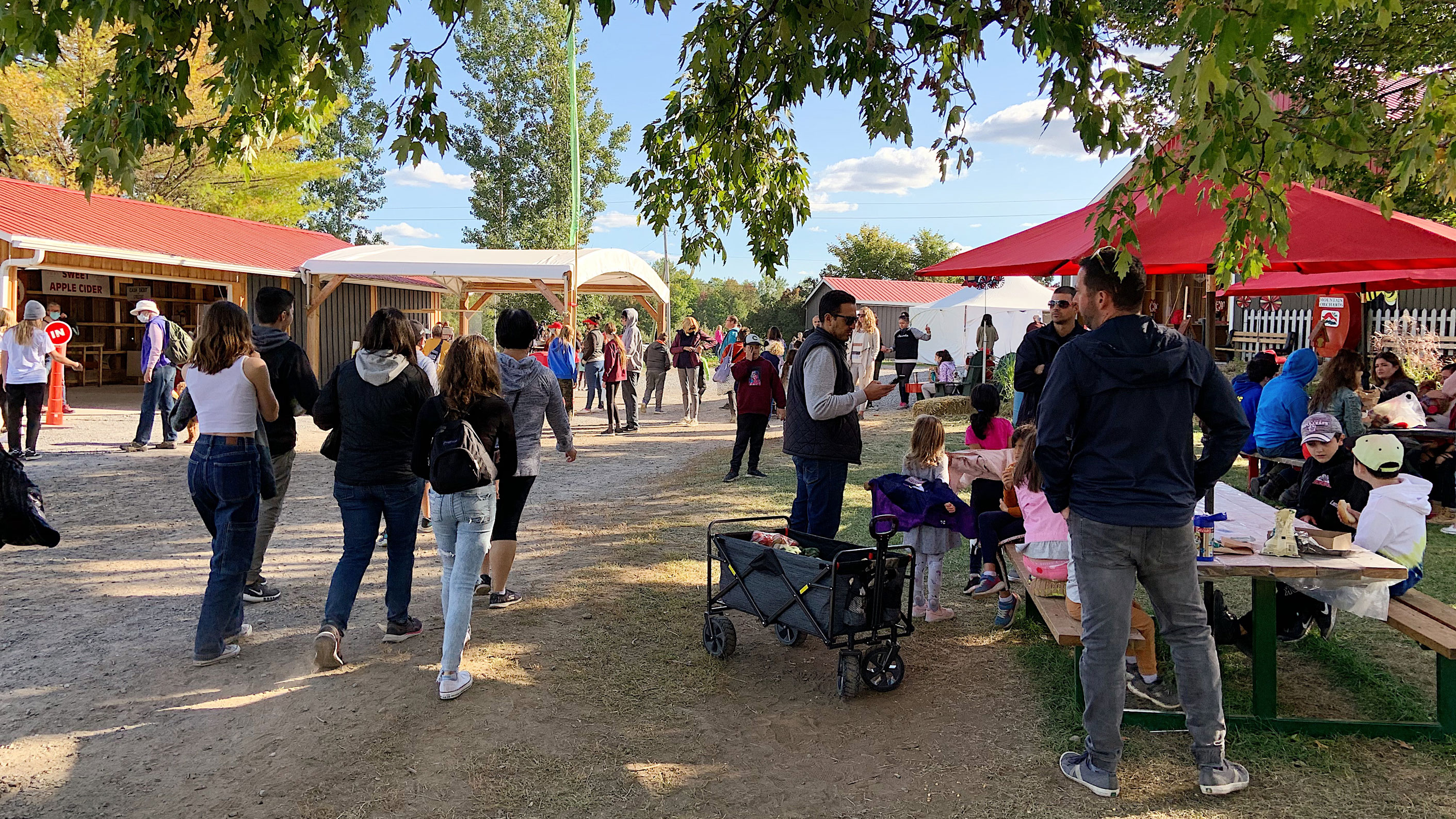 A sunny, warm weekend drew an unexpectedly large crowd to Mountain Orchards near Kemptville on Saturday, Sept. 19. But for some visitors, flocking to the great outdoors for a classic autumn ritual became uncomfortable in areas where orchard-goers — most of whom weren't wearing masks — lined up or walked in close proximity to each other. [Photo © Scarlett Diamantopoulos/Capital Current]
Community

Looking for an outdoor activity to escape the COVID-19 isolation, thousands flocked to Mountain Orchards near Kemptville this past weekend to pick some apples. But the crowds concerned some visitors that they might have an increased risk of exposure to the virus.

In response, Mountain Orchard managers have strengthened their protocols and reinforced group limits which came into effect Sept. 23.

“With the second wave, the numbers are starting to spike a bit. We felt that we really needed to tighten everything up on our end,” said Mountain Orchard owner Shelley Lyall.

Lyall said she and the team at Mountain have consulted local health officials and police, as well as other businesses. “We want to keep our staff and the public as safe as we possibly can. It’s been really challenging. Let’s just say it’s been keeping us up at night.”

The new protocols include increased signage, mandatory mask wearing in the orchard’s stores and in designated parts of the picking area, mandatory social distancing, groups limited to 10 people or fewer and closing the area where drinks had previously been sold.

Management has also taken to social media to really “ride home the message” that customers visiting the orchard must follow all rules.

In the midst of a pandemic, Lyall said she was unsure how the apple picking season was going to look this year. “In April, we didn’t know if we would be open. As they say, these are unprecedented times, and we had no idea what was going to happen.”

After being open for several weeks, customer turnout has far exceeded Mountain Orchards’ expectations. “It was very touch and go and we weren’t sure what it was going to be like this year, but so far it has been insane,” said field manager Sarah Walsh after the Sept. 19-20 weekend. “I was expecting people to come out, but this has surpassed all of our expectations.”

Popular varieties such as honey crisp were available last weekend at the orchard in the village of Mountain 45 minutes south of downtown Ottawa.

The honey crisp weekend is usually one of the most popular at Mountain Orchards, but Lyall said she believes the large crowds were due to “a combination of everything.” After months in relative isolation, many people are eager to get outside and enjoy the weather. And apple picking is an outdoor activity in which social distancing rules can typically be followed.

However, the big turnout meant some orchard-goers became uneasy about sharing even a large outdoor area with others, especially in places where the visitors were funnelled into closer proximity.

Chelsea Davidson was caught off guard by the size of the crowds and the low percentage of mask wearers on Sept. 19. “There was the most amount of people I think I’ve ever seen here — a lot of people were not wearing masks and that just made the experience kind of nerve racking.”

Emily Terziano, owner of AppleStock Orchard in Winchester, about 55 km southeast of central Ottawa, said she has also seen a sharp increase in the number of visitors this season.

“Usually our season starts a little bit slower,” she said, “but this year everybody’s schedule went upside down and we’re definitely seeing an uptake in people coming during the week.”

To allow for the safest apple-picking experience possible during the pandemic, Mountain Orchards made numerous adjustments to the way it operates.  “Since it has been so crazy insane, we definitely have had to take a lot of safety precautions,” said Walsh.

Some of the original precautions included signs reminding visitors to stay six feet apart, hiring of extra staff to guide customers, requirement of masks in the store and on employees, a one-family-member limit for payment checkouts to control exposure, and frequent cleaning of high-traffic areas.

After the overwhelming crowds on the Sept. 19-20 weekend, management reflected on areas of concern and made additional restrictions to identified high-risk “pinch points” to protect visitors and staff.

The biggest initial change the orchard made at the start of the season was the elimination of wagon rides to the main picking area on weekends, and the introduction of an “apple valet service.” The orchard opted to have visitors walk the 500 metres to the orchard down a lane that is divided to separate those heading out and those coming back.

The apple valet service re-purposed the wagon to shuttle visitors’ bags of apples to the check-out instead of carrying them over that distance, if they preferred.

Unfortunately, with the massive crowds that the great weather attracted, the orchard’s walkways essentially funnelled everyone together, which made maintaining the two-metre safe distance difficult. Although the orchard at 100 acres may be large enough to accommodate social distancing in general, visitors still needed to congregate at certain points to get to the orchard and purchase apples, creating large lineups.

And although it has always been mandatory for employees wear masks, originally visitors were only required to do so when they were in the store. As a result, only about 30 per cent of visitors were wearing masks outside of the store and all other common areas, which added to the apprehension among some attendees.

“We were re-thinking our decision in the car when we saw how busy the parking lot was, but we decided to bite the bullet,” said Purvi Desai, who was among the mask-wearing minority in the orchard on Sept. 19, along with her husband and two children . “We really feel scared because there’s so many people, many not wearing masks, and we were not expecting this.”

Josee Lalande and her two children were also wearing masks and shared a similar attitude, commenting: “The crowds are pretty crazy in here. In fact, when I pulled in and saw the traffic jam in the parking lot I decided to call other orchards, but they were just as busy apparently.”

Even an open apple orchard, as low-risk as it may have appeared, can become overcrowded and more of a high-risk activity than initially intended. The new precautions Mountain Orchards have put in place will be tested this weekend, and management said it remains committed to an enjoyable experience with public safety as their top priority.

With new varieties available each week — Cortland, McIntosh and Spartan are all grown at Mountain — the apple picking season is expected to run until about Thanksgiving in mid-October.