3 days ago 0 4 min read
We use cookies to provide a personalized experience for our users. By continuing to browse this site, you give consent for cookies to be used.
Got it!
Home > Sports > Road to recovery begins as horse racing allowed to resume in Ontario 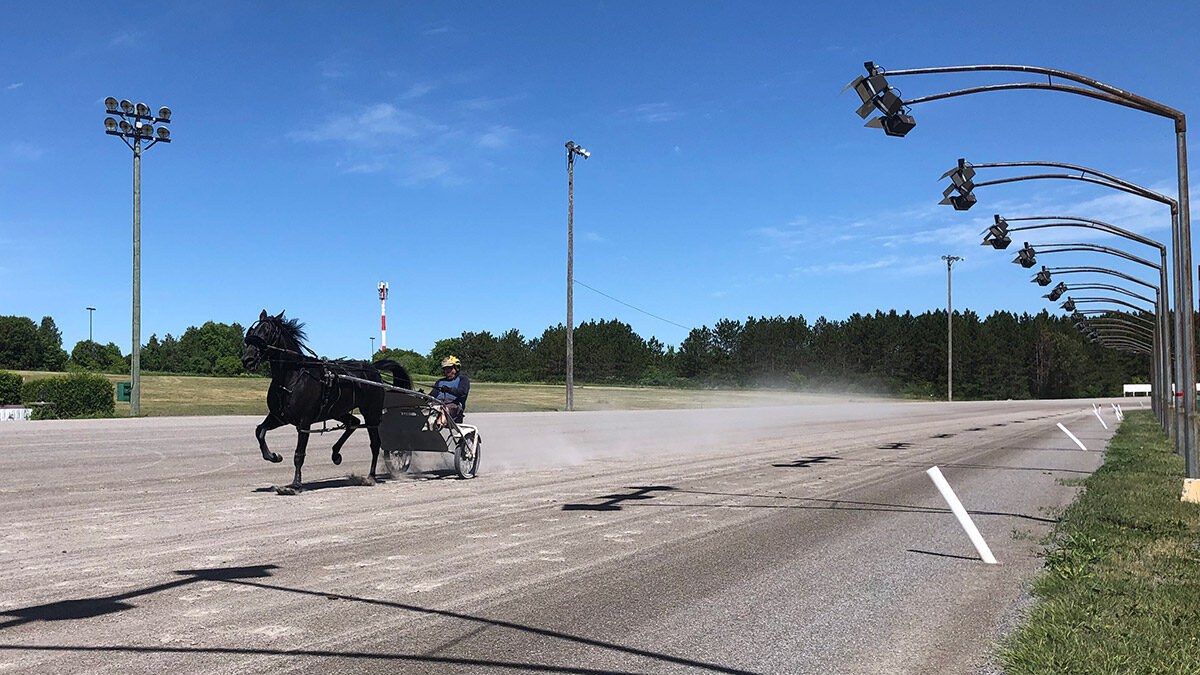 After being shut down by the pandemic, racing is set to resume at the Rideau Carleton Raceway and Casino on Sunday. But spectators aren't allowed. [Photo courtesy Rideau Carleton Casino]
Community

Harness racing is resuming Friday across the province, but something will be missing at the racetrack: the fans. Under step one of Ontario’s reopening, spectators aren’t allowed at the track.

“After COVID, I could walk around in my underwear on a live night, and nobody would know better,” said Peter Andrusek, the racing manager at Rideau Carleton Raceway in south-end Ottawa. The track reopens for racing on Sunday.

Two years ago, on race nights, Andrusek would stand in the 3,000-person grandstand at the Albion Road raceway and casino in a suit and tie.

Andrusek said he’s thrilled to be back, but COVID-19 and the restrictions that accompanied it have had serious consequences. He’s worried about losing the strong momentum Ontario’s harness-racing industry had before the pandemic.

Shutdowns were in effect across the continent last year, so horse people didn’t have an alternative, said Andrusek. But this year, U.S. tracks remained open while Ontario was locked down.

That meant the TV and simulcast locations — which allow off-track betting, and which Andrusek had worked hard to secure — were suddenly wide open and snatched up by U.S. competitors.

“Frankly, it’s probably going to take a year, maybe more, for me to get us in a position where our audience outside of the racetrack for off-track betting was as big as it was going into COVID,” said Andrusek.

The asymmetry between restrictions in Canada and the U.S. also meant some Ontario horse folks were drawn to events in the U.S. — which offered the additional allure of speedy vaccinations.

That’s a familiar story to driver Anthony MacDonald. He’s president of TheStable.ca and has just more than 100 horses. MacDonald normally spends his summers split between racetracks in the U.S. and Ontario. This year, MacDonald left for the U.S. three days after the last lockdown was imposed in Ontario in April.

Within nine hours of arriving in Ohio, MacDonald had received a vaccination.

Staying in Ontario any longer would have made it impossible to compete with U.S.-bred horses that had been allowed to train throughout the pandemic, he said.

“You’re really handcuffing yourself, and I just couldn’t have that,” said MacDonald.

When he left, he saw streams of other people leaving the province and was worried Ontario would have trouble filling race cards.

“You took a very fragile agricultural industry, and you chopped away and chopped away at its foundation. And the fact that there was much of anything left is shocking,” said MacDonald. “The fact that they were able to fill race cards and qualify upwards of 300 horses over the last week and a half – that’s nothing short of incredible.”

Exemptions for other sports

MacDonald said he was frustrated when Ontario Premier Doug Ford allowed high-end athletes to train for sports like baseball, basketball and hockey, but not harness racing — an outdoor sport.

Jonathan Zammit, the executive director of Ontario Racing, said he supports the government in ensuring public safety, but he can’t explain why horse racing wasn’t permitted to train in a way similar to other professional sports.

“It’s not for lack of trying to explain to the powers that be,” said Zammit. “Horse racing is a professional sport that has very good protocols … All we’re asking for is a fair playing field.”

Although MacDonald said he’s unhappy with the way Ontario handled the lockdown and reopening, he said Ontario Racing went above and beyond keeping the province’s horse people updated.

“We’re ready to handle these challenges. It’s the second time around for us,” said Zammit. “We learned a lot from 2020.”

Getting back to normal

Zammit’s hope for the upcoming season is to return to a sense of normalcy, keep up the high level of racing in Ontario, and start welcoming back fans.

Horse racing can take advantage of technology, broadcasting races and using internet wagering. Live races at Ottawa’s track have been able to attract $400,000 in bets, even without spectators.

“But let’s face it: we’re still a sport and we need spectators,” said Andrusek.

He said he hopes the government will look at low case numbers and expedite the reopening stages.

“We never had COVID in here. Not a sniff of COVID,” said Andrusek.

Racing resumes on Sunday at Rideau Carleton. Luckily, Andrusek said, Ottawa’s track has retained the bulk of its horse roster, especially the most competitive side of it.

“Our horsemen have gone through a lot,” said Andrusek. “I salute them for their resilience.”