4 days ago 0 8 min read
We use cookies to provide a personalized experience for our users. By continuing to browse this site, you give consent for cookies to be used.
Got it!
Home > Business > Small Business > Food trucks count on customer loyalty as patios and the province reopen 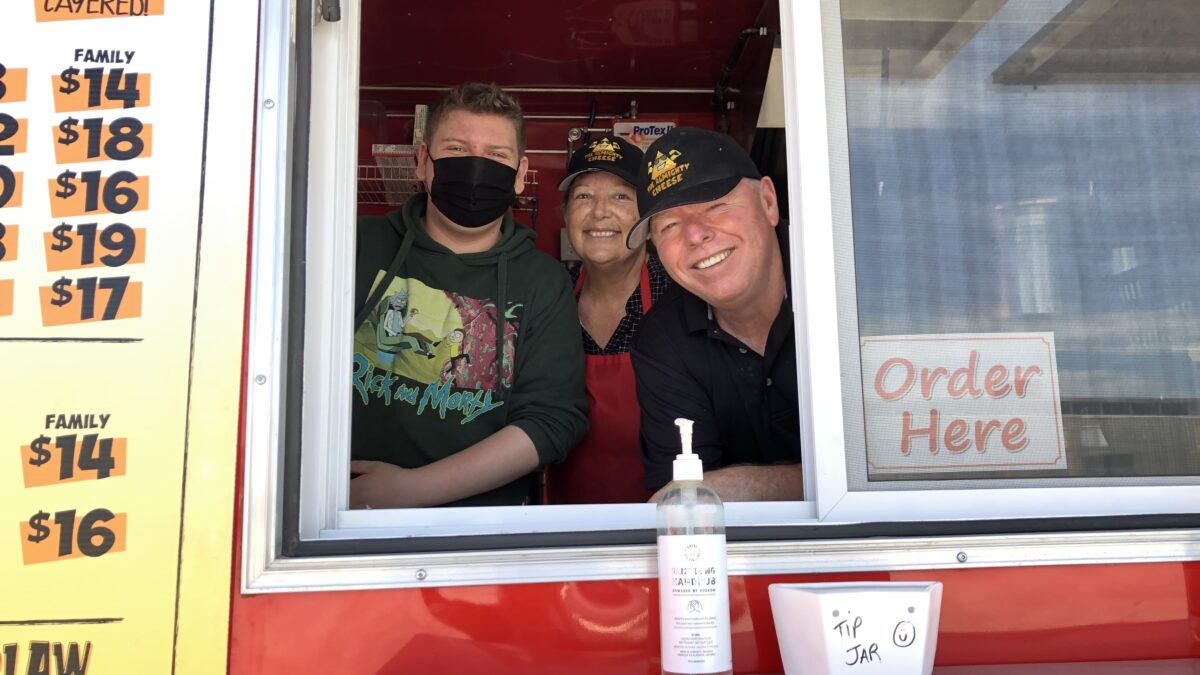 Steven Carle (right) with some of his staff at Almighty Cheese food truck on Trim Road in Orleans. (Photo @ Sarah Pledge Dickson)
Business

Patios are reopening Friday, and some food trucks are adding picnic tables to their parking lots to try and keep up with what they see as a potential loss in business.

Unlike many restaurants during the pandemic, food trucks have actually prospered because of the way they serve their creations.

Now as Ontario reopens, “we know there’s going to be a hit for sure,” says Steven Carle, owner of the Almighty Cheese food truck which is located on Trim Road in Orleans.

Despite provincial restrictions, business for food trucks has been cooking. Almighty Cheese, for example, hired seven more people last year, a proud moment for them.

“With restaurants and patios closing, it’s sad to say, but it really elevated the food truck industry,” says Carle. “And so we got tenfold for our money, kind of thing.”

After opening three years ago, 3’s Company fry truck was having a tough time getting noticed in Orleans. With restaurants closing, however they have connected with a lot of new customers.

“While every restaurant was closed, we were open,” says Luc Lacroix, owner of 3’s Company. “Now, a year and a half later, we get a lot of repeat customers because now we’re really well known.”

And community support is being felt across the board. Almighty Cheese actually opened in 2019 doing mostly events such as poutine fest, and catering. COVID-19 cancelled those opportunities, so they pivoted to a stationary food truck. Without the support of the community, they wouldn’t be able to stay open.

“I can’t find good enough words to say how grateful I am,” says Carle. “Thank God for them, because if it wasn’t for them, we could have lost our trailer.”

Lacroix shares the sentiment, calling the community rallying behind them “amazing.” He’s confident they will continue coming out.

“I still know that I’m going to continue getting my repeat customers,” Lacroix says.

When restaurants closed at the beginning of the pandemic, Matt Robitaille left the fine dining industry to open Stoked, a smokehouse food truck on Youville Drive.

“It was really the only time in my life that last 10 years or so that I had such a break from work and I was able to pay attention to what I wanted to do,” Robitaille says.

He isn’t sure how reopening will impact his business because he’s never operated without a pandemic. To keep up, he’s building a patio for customers to sit and eat.

But across the street, La Ha Tacos isn’t planning on putting out tables just yet. Owner Jason Wing worries that following restrictions will be difficult without staff being able to enforce them. That doesn’t mean he’s worried about business though.

“To be honest, I’m not worried,” Wing says. “We have a very strong customer base.”

In fact, he hopes reopening will share some of the wealth that food trucks have experienced.

“If it does take some of my business and put it somewhere it’s more needed, I would be perfectly OK with that,” says Wing.

Wing has been working in the industry for four years and sympathizes with the restaurants, and their staff. He says that some restaurants might be short-staffed as they scramble to keep up with the changing restrictions.

“It’s difficult to find adequate staff because people aren’t willing to commit to a job they might lose,” says Wing.

Despite worries that the food truck business will suffer, they’re all still excited that things are going back to whatever normal is.

“My wife and I want to sit on a patio too!” says Carle.