2 days ago 0 2 min read
We use cookies to provide a personalized experience for our users. By continuing to browse this site, you give consent for cookies to be used.
Got it!
Home > News > Canada > Ontario > The displacement effect: Ontario’s ‘disconnected’ online school system pushing educators to breaking point 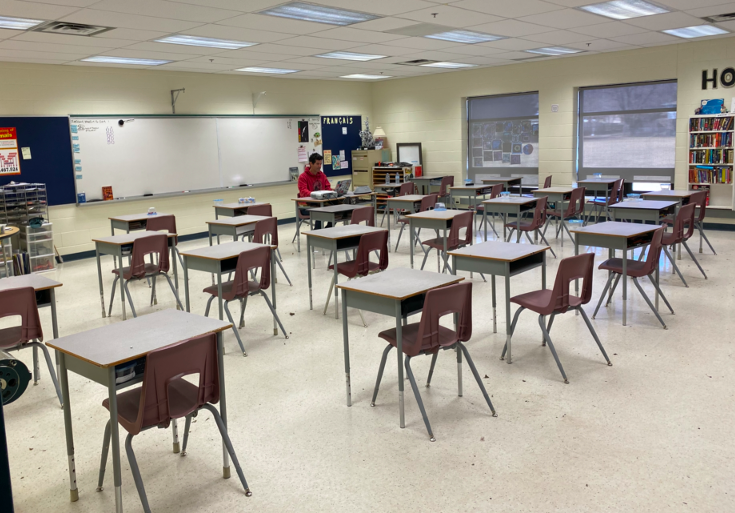 When asked about teaching during the pandemic, Meaghan Beatty’s shoulders sink and her fingers fidget with the edges of her cup. Beatty, who has taught kindergarten north of Toronto for 16 years, is a victim of what psychologists are describing as an epidemic of “educator burnout.”

“I felt guilty not being the teacher I used to be,” she said in an interview. “I wanted to be a support for my kids, but I was having a physical and mental breakdown.”

Beatty’s close connection to her students is shown simply in the fact that she calls them her kids. The Schomberg, Ont. teacher speaks of having to keep them two metres apart in the classroom. She places her hands on her chest explaining how much they need love and affection and how difficult it is to show that to them through a mask. Voice quivering, Beatty recalls vomiting before school, intense insomnia, and constant panic attacks. Her biggest concern however is her kids.

Choking back tears, Beatty struggled to explain taking a leave from teaching several months ago, in the midst of the COVID-19 public health crisis. She says she’s unsure about when she would be mentally ready to return to the classroom.

From hopelessness to anxiety, feelings of depression to thoughts of quitting, Ontario teachers are facing crippling burnout because of what they’re calling a “disconnected” education system.

The Canadian Association of Mental Health defines burnout as “a state of emotional, physical and mental exhaustion caused by excessive and prolonged stress.” Highly associated with burnout is compassion fatigue. The Canadian Medical Association describes compassion fatigue as “the cost of caring for others or for their emotional pain, resulting from the desire to help relieve the suffering of others.”

According to teachers, the key causes of their burnout are threefold: online fatigue, the stress associated with keeping students safe and the intense emotional burden of “compassion fatigue.”

The Ontario Ministry of Education says it provided mandatory training in online learning for all teachers at the start of this unprecedented school year, yet sources claim the training didn’t happen. Teachers, board representatives and mental health experts want the government to follow through on its promises and make changes and increase support for educators before the crisis escalates beyond repair.

When regions such as Peel and Toronto – and then other parts of the province – returned to online school this spring, teachers demanded the comprehensive training they say they were promised but never received.

In January, Ontario’s Minister of Education Stephen Lecce released a statement ahead of the latest lockdown and return to online schooling.  The statement reiterated that “to ensure a better learning experience, every teacher in this province received mandatory online training on remote learning, before the school year even began.”

But some Ontario teachers say otherwise.

Doreen Crocker, a teacher at Clearmeadow Public School in Newmarket, Ont., took a leave of absence in September from her “favourite job in the world” because of the pressures involved in delivering online learning.  A veteran of the classroom, Crocker has been an educator for more than 30 years and has been at Clearmeadow since 2004. She said she was not equipped to meet the expectations of the government.

“The government, like Lecce, says that they give teachers training, and then they don’t. I had to teach myself how to do online teaching,” Crocker said.

Crocker says many of her colleagues are at the point of quitting, yet they persevere because of their dedication to students. She said she wants politicians and government representatives to gain a better understanding of what teachers are going through every day.

“My advice to the government would be, get in the classroom and see what’s going on. You have no idea.”

Even in class learning during the pandemic is stressful because, as Crocker explained, the space in the classroom does not allow for students to be safely two metres apart. This places and extra burden on teachers to ensure students’ safety in a risky environment.

Crocker said her colleagues are working on the frontlines of the pandemic and feel betrayed and dismissed by the provincial education ministry, which she claims has made multiple false promises to parents and families about the degree to which teachers are being trained.

In response, a spokesperson from Lecce’s office said: “Throughout this pandemic, we have followed scientific expert advice and systematically strengthened our plan to keep students and staff safe.”

The spokesperson emphasized that Ontario leads the nation in providing COVID-19 school reopening funding and a comprehensive masking policy. The spokesperson also claimed the province has more than doubled mental health funding during the pandemic, but did not specify whether these supports were focused on teachers or students.

Darren Campbell, president of the York Region sector of the Elementary Teachers’ Federation of Ontario, said reports coming from other teachers in the region are similar to those made by Beatty and Crocker.

“Teachers are experiencing feelings that they are being left behind and abandoned by the government,” said Campbell.

To help teachers navigate this troubling time, Campbell said ETFO recognizes burnout as a serious and important issue, and that the federation is consistently informing teachers of their rights.

Campbell said that the government has been reporting that they set aside time for training, but they have put school boards such as York in a bad position because it is done “haphazardly.”

“The reality here is that the school board did train teachers in the beginning of the year, however it was centred around COVID protocols,” said Campbell. “Most certainly, I can assure you, that training for online learning did not happen the way that the ministry is reporting it did.”

This disconnect is why many teachers are reaching what Campbell called “the end of their rope.”

The disconnect is a recipe for disaster, according to Dr. Kristy Goodwin, a digital-wellbeing expert from Australia. Goodwin, an author, lecturer, and researcher in neuroscience, attributes the extreme exhaustion felt by teachers like Beatty and Crocker to the impact of excessive screen time on the brain.

“It’s what we call the ‘displacement effect’ because an increased amount of time spent looking at a screen comes at the expense of some of our basic physical and psychological needs,” Goodwin said.

Goodwin has dedicated her career to researching the brain’s response to digital space. In addressing the impact of screens on mental health, Goodwin said they interfere with the biology behind our “ancient brains.”

“When we are doing things online, it often activates our limbic system. This can trigger our sympathetic nervous system, our fight-or-flight centre. We get this sense of panic when we open our inboxes or (join) Zoom meetings,” she said.

Goodwin said that studies by Microsoft have shown that people in online meetings have about 30 to 40 minutes until fatigue sets in. So the hours spent online by some teachers is far beyond the recommended amount.

“We need to work within these biological constraints. We need sprints, not marathons online,” Goodwin said. She encourages school boards and the government to provide training on how the brain receives information and noted that educating teachers about their online habits can improve their mental health.

“The brain learns online in completely different ways than it does in person,” she said.

In an effort to support teachers in navigating online learning during the pandemic, Tracey Cox, the principal of curriculum and instructional services for the York Region District School Board, helped create a “Learning and Caring Plan” for teachers.

Cox said the school board provided teachers with extra-curricular and optional training sessions throughout the year in online learning. The sessions were accompanied by forums for teachers to provide feedback.

“We did receive some negative feedback from teachers working long hours. Teachers requested professional learning during the instructional day, but with the shortage of occasional teachers this year, we weren’t able to provide release time,” Cox said.

Adding to the stress

In a year like no other, the education ministry’s introduction of a new elementary math curriculum created an even greater burden for teachers.

“Teachers are in this environment just trying to learn how to teach online and now they have to figure out how to teach that, too,” she said.

Dressed in an orange hockey jersey while eating an orange, Marc Le Moine, celebrates Orange Day with his students — alone in a classroom.

Le Moine explained that in 25 years of teaching, he has considered quitting maybe once or twice, yet in the past few months, he’s considered it multiple times. And he’s not the only one. A recent CBC survey of thousands of Canadian teachers found that a third of respondents had considered retiring or changing their profession during the pandemic.

Whether it is the stresses of being in the classroom or screen fatigue, Ontario teachers are reporting immense burnout.

“One of my colleagues quit teaching this week,” Le Moine said. “Last week she came to me for help with technology and burst into tears … she was ready for a mental breakdown,” he said, wearily.

Le Moine agreed with other teachers interviewed by Capital Current that the Ontario government has not kept its promise to provide training.

“For me, the burnout is the messaging disconnect between what the board and ministry are telling parents, versus what is actually happening. I find it really frustrating.”

Exhausted by the demands of online schooling, Le Moine said he has never been so overworked in his career. “

An online school day takes twice to three times the planning than that of a regular school day. … We are online up to 10 hours a day, including Saturdays. At the end of the day, I feel complete exhaustion,” Le Moine said.

Looking to the future, Le Moine, Crocker and Beatty all said they want government officials to see firsthand the extreme burnout that they and their colleagues are experiencing. And whether they are facing insomnia, vomiting, panic attacks or depression, Ontario teachers trudging through an unprecedented year expect more support from a government that they say has “abandoned” them.

Teachers on leave like Beatty are hopeful that with the right training and support from the government, they will be able to return to the classroom.  Beatty expressed excitement about seeing “her kids” again someday.

“Putting my health ahead of my job was one of the hardest things I’ve done, but it had to be done,” she said, adding: “I miss teaching. I miss my kids.”