2 days ago 0 4 min read
We use cookies to provide a personalized experience for our users. By continuing to browse this site, you give consent for cookies to be used.
Got it!
Home > News > Ottawa > The Pigeon King flies into Ottawa 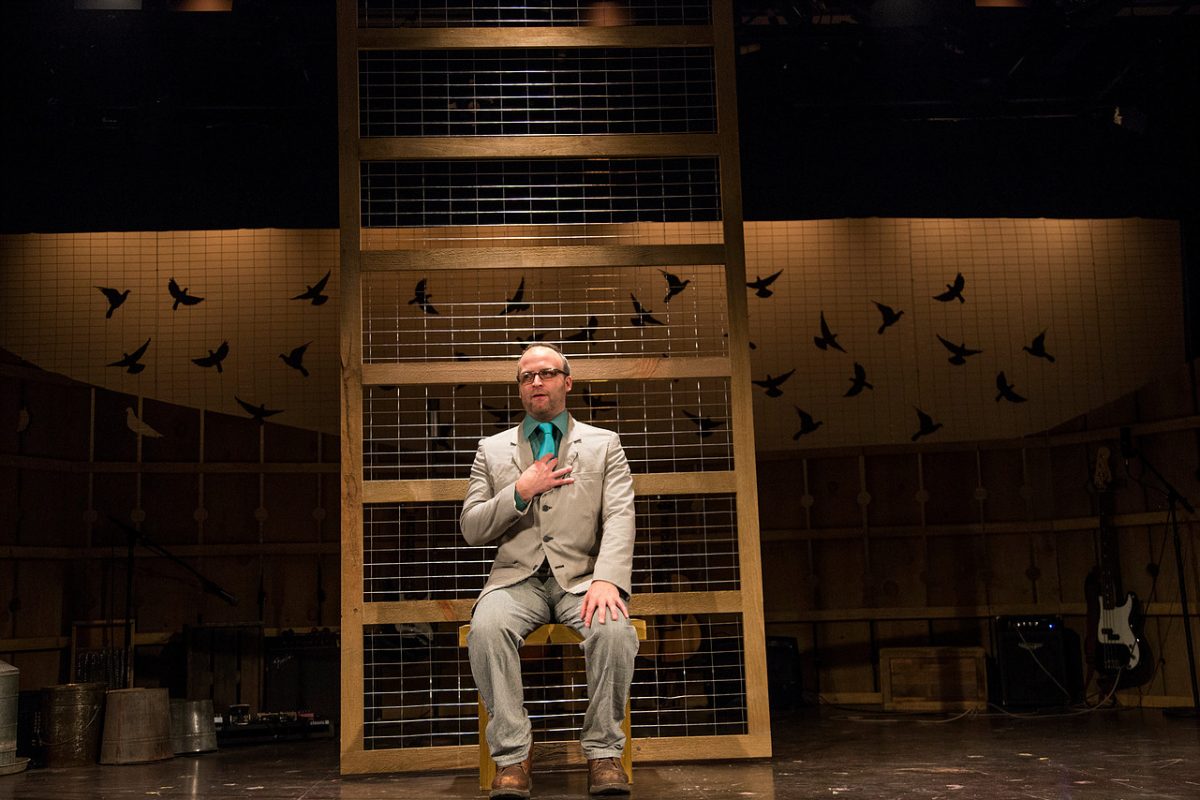 The Pigeon King flies into Ottawa

Jillian Keiley knew she had stumbled upon something wonderful the first time she saw The Pigeon King on stage in the little village of Blyth in southwestern Ontario.

Keiley is head of English-language theatre at the National Arts Centre and after that show she decided to bring The Pigeon King to the main stage at the NAC, where it will run from April 24 to May 5.

“I saw this show at the Blyth Festival two years ago and loved it – a thrill ride – and it’s true!” Keiley said in an email exchange.

The Pigeon King is based on the outrageous story of Arlan Galbraith, who was convicted of fraud in a Waterloo Court and sentenced to seven years for a Ponzi scheme that defrauded dozens of people. The Blyth Festival production is part country musical, part comedy and part courtroom drama, but the real story is just as dramatic.

Galbraith’s Pigeon King International scam unfolded from 2001 to 2008. Galbraith convinced thousands of farmers across Canada and parts of the U.S. that he had exotic racing pigeons for sale that would make these farmers rich. The improbable plan would leave the investors millions in debt when Galbraith’s elaborate scheme came crashing down.

The play was created and first performed in 2016. Keiley said she wanted to bring the performance to a wider audience.

“I couldn’t resist programming it – a great production of a story that truly could only happen here,” Keily said.

Gil Garratt, is one of the playwrights and the current artistic director of the Blyth Festival. He also acts, undergoing a physical transformation to portray the folksy Galbraith.

Garratt first heard about the Galbraith story in 2015, when a local newspaper editor sent him a piece the New York Times had written. As Garratt was reading, he began to recognize places in the story and became curious.

“I recognized that all these places were right in my backyard,” Garratt said.

Garratt and his team at the Blyth Festival wanted to turn the story into a play but needed to speak to the real farmers first, in keeping with Blyth’s tradition over 45 seasons of bringing authentic rural stories to the stage.

“What Arlan Galbraith did, he hurt a lot of people. It took a while for us to gain people’s trust,” Garratt said. But Garratt and his team wanted to make the farmers the real heroes of the story.

“The farmers and people that we spoke to, none of these people are stupid,” Garratt said. “As a group, we tried to give as thorough a portrait of the community as we could; to show how relatable, how easy it was not only to fall into Arlan’s trap, but to believe the things he was saying.”

And while the cast was nervous heading into their first performance, they had nothing but joy and excitement going into the many after that and the play became one of the most successful ever performed in Blyth..

Garratt said that at the end of the first performance, “the audience lept to their feet, they were just roaring with applause.”

“It brought back a lot of memories I forgot about,” Sjaarda said. “It was entertainment, a bit of knowledge. You just didn’t know, you never heard how bad everything was. That brought a lot of knowledge on the situation.”

Mary Baxter is a reporter who worked with Better Farming publication at the time of the events and was part of the team that broke the Pigeon King story. Her character is portrayed on stage. Baxter said she, too, thought the play did a great job of portraying the events and the feelings behind them.

“The way that they’ve structured it really gets to the emotion that so many farmers faced,” Baxter said. “It’s a point of catharsis for the people that went through the situation, and there’s a lot of respect in the play for the farm community.”

Garratt said he’s thrilled and honoured that those who were impacted appreciated the play and the emotions it brought up.

“In many ways, we were able to stand on the shoulders of an entire community that had gone through this experience,” Garratt said. “And to take that show to the National Arts Centre is incredibly inspiring. A story with farmers as heroes on the national stage is incredible.”

The Pigeon King comes to the NAC April 24 to May 5.