4 days ago 0 6 min read
We use cookies to provide a personalized experience for our users. By continuing to browse this site, you give consent for cookies to be used.
Got it!
Home > News > Police > Under fire over lack of public input, Ottawa police board plans for community roundtables 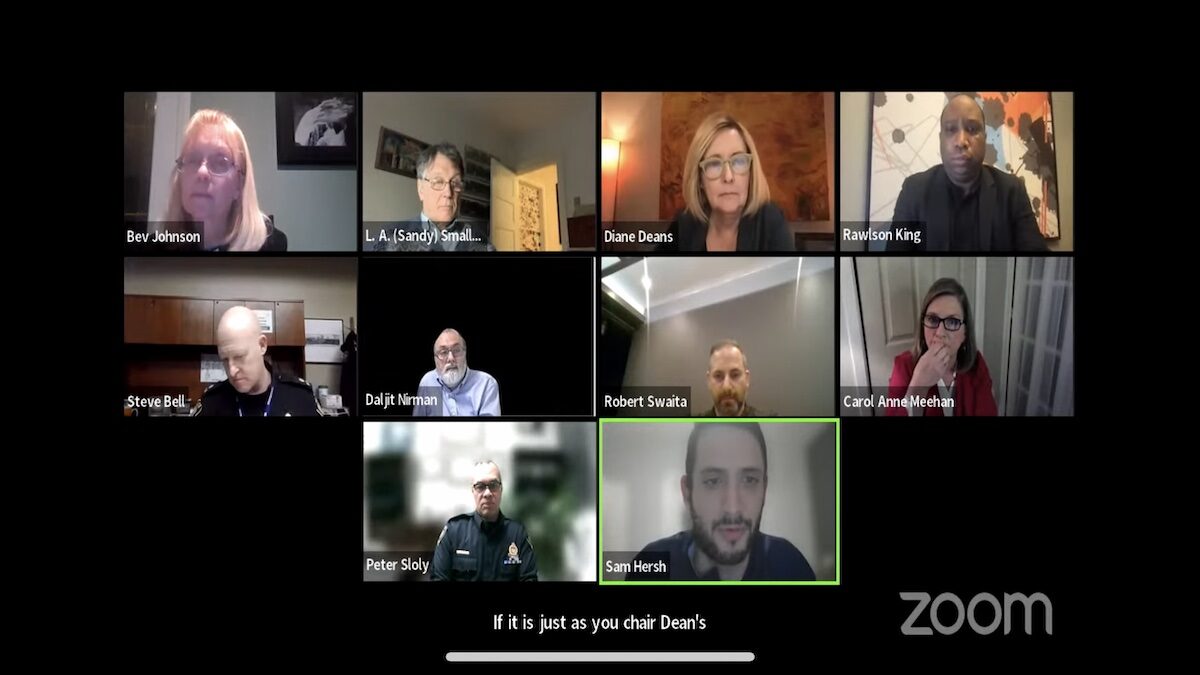 By TavneetDhillon, 4 months ago 0 4 min read

Facing criticism that its meetings don’t permit enough public input, members of the Ottawa Police Services Board plan to implement regular roundtable sessions that they say will improve transparency and consultation with local citizens.

The issue came to a head before the board’s Jan. 24 meeting. Horizon Ottawa, a citizens’ watchdog on transportation, policing and other municipal issues, released a statement criticizing a planned police board motion that “severely limits the democratic participation of residents.”

The motion, according to Horizon Ottawa, would “make it against the Board’s procedural bylaws to ask members of the board or the police any questions as well as limit even further the deadline for when residents can register to become delegates at monthly board meetings.”

“This motion is a breach of local democracy; if residents cannot ask questions how can they expect to get any answers?” said Sam Hersh, a Horizon Ottawa board member and spokesperson. “Why does there continue to be a double standard in accountability when it comes to police?”

Gloucester-Southgate Coun. Diane Deans, chair of the Ottawa Police Services Board, began the January meeting by acknowledging the divisiveness of the rules around public participation in board meetings.

“If residents cannot ask questions how can they expect to get any answers? Why does there continue to be a double standard in accountability when it comes to police?”

She said the rules have always limited questions and discussions of the agenda by public participants in the meetings of the board.

Deans also said members of public delegations have never been allowed to ask questions directly to the board. As she explained during the meeting, “delegations are not intended for back-and-forth dialogues.”

Despite these rules, Hersh says “(The police board) calls it a business meeting, but it is also one of the only public spaces we have to put pressure on them.”

Hersh said citizens do not have adequate avenues to “demand answers on the spot”  and that this was the major issue with the board’s procedural bylaws. “By giving the board time to respond, they will have put in time, probably, to tip-toe around the issue.”

In its pre-meeting statement, Horizon Ottawa highlighted the anti-racism movement of the past two years as an example of increased public interest in policing. “Calls for police reform have continued to grow since the June 2020 police murder of George Floyd,” the statement noted.

Meanwhile, the “Freedom Convoy” truck protest that has paralyzed downtown Ottawa since Jan. 29 has also prompted sharp criticism of how Ottawa Police have handled the situation, including a Horizon Ottawa condemnation of police inaction.

“After this is all over, the city needs to take a long hard look at the role and future of police in our city,” Hersh said in the Jan. 31 statement about the trucker-led protest.

During the Jan. 24 police board meeting, other delegates objected to the board’s lack of transparency and disinterest in engaging with the public.

One delegate felt the five-minute time slot they received to raise issues was insufficient. They said they could not adequately communicate all of their ideas to the board.

“The procedural bylaw has always required that board members refrain from entering into debate with delegations,” Deans told Capital Current in an email. “The proposed changes to the procedural bylaw were meant to make this more explicit for all parties involved.”

Jeffrey Monaghan, a Carleton professor specializing in policing and social movements, said, “(Ottawa Police is) behind the ball, in terms of public outreach and public legitimacy.

“When it comes to more critical engagements of people who want changes with policing,” Monaghan added, “their openness is much less formalized and they’re much less open to those kinds of dialogues.”

To explore options for improving public input into deliberations, the board commissioned a report from the Public Affairs and Community Engagement and Middle Ground Policy Research consultancies.

These two organizations offered recommendations for rebuilding the community’s trust and helping Ottawa Police shift from being seen as a police force to a “police service.”

One of these suggestions was a “deliberative community roundtable.” At this roundtable, citizens would meet with representatives of the board to discuss broader issues that do not fit within the scope of a regular board meeting.

Hersh and Monaghan expressed concerns that the roundtable may be a way for the board to listen to the public but not address their issues.

However, Deans and the board support the roundtable recommendation and it was unanimously approved in the Jan. 24 meeting.

Deans said in the email that next steps will be the development of “an action plan” to create the roundtable.

Deans expressed the hope that the community roundtable would help the board improve procedural rules for meetings. The police board’s Feb. 28 meeting will continue the discussion.