5 days ago 0 4 min read
We use cookies to provide a personalized experience for our users. By continuing to browse this site, you give consent for cookies to be used.
Got it!
Home > Politics > Unhappy campers protest Liberal government, COVID-19 measures 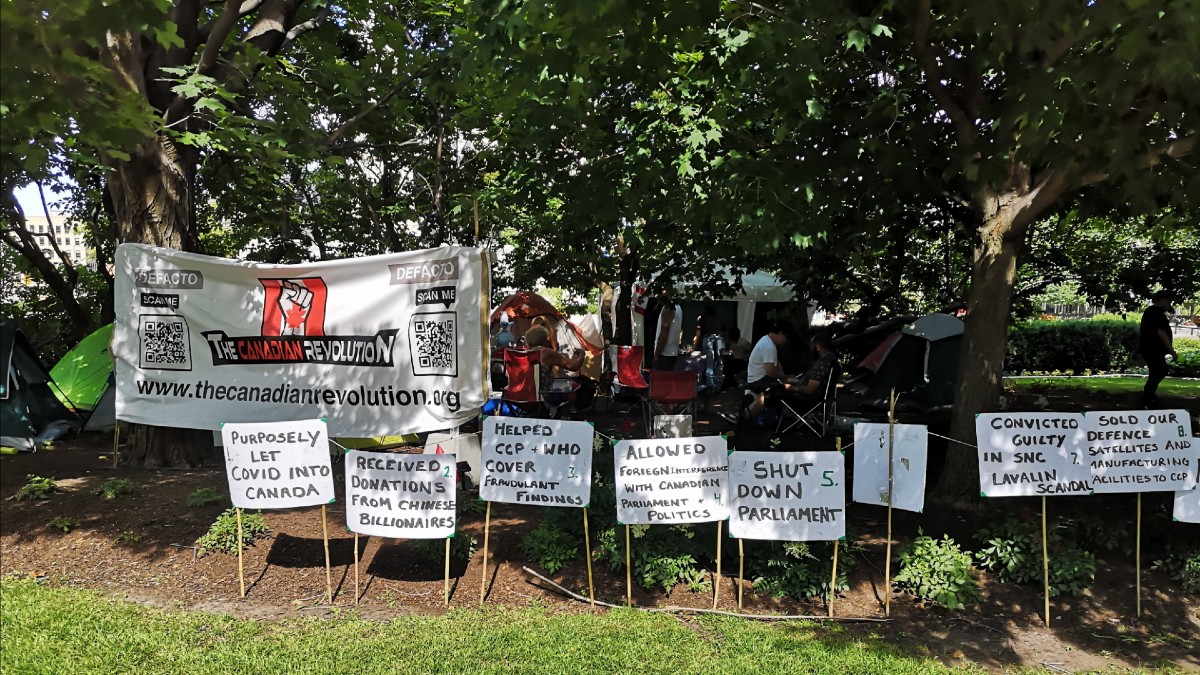 Protestors have been camping on a grassy area next to the National War Memorial since July 1. The site is also directly across Elgin Street from the Office of the Prime Minister and Privy Council. The protesters say they are taking a stand against various Liberal government policies and its response to the COVID-19 pandemic. [Photo © Randy Boswell]
Canada

Equipped with tents, lawn chairs and more than 20 signs planted in a row across from the Prime Minister’s Office in downtown Ottawa, a group of about a dozen people has transformed the leafy west side of the National War Memorial into a protest campground.

The signs accuse the Liberal government of a host of nefarious but unproven actions, such as purposely letting COVID-19 into Canada and conspiring with the Chinese Communist Party to mislead the public on the pandemic.

The campers also oppose the use of face masks to combat COVID-19, vocally supporting a “Hugs Not Masks” approach to the public health crisis and making many claims — none of which are backed by public health authorities — that wearing face masks “increases virus risk,” “increases toxic inhalation” and “shuts down (the) immune system.”

The campers are part of a group called The Canadian Revolution. Their Facebook page, which appears to have almost 32,000 members, loudly trumpets the message: “WHEN THE GOVERNMENT NO LONGER SERVES THE PEOPLE IT IS THE DUTY OF THE PEOPLE TO REPLACE IT.”

“We stand for freedom and we will no longer be complacent as our rights and liberties are infringed upon,” the group states.

“We are a bunch of patriots from across the country,” said Miranda Remillard, one of the leaders of the group. “Some drove, some flew,” added the Alberta resident.

“We are here to take a peaceful stance against the unlawful defacto governance of the people.”

She said the group wants Prime Minister Justin Trudeau and other elected officials to resign because, as she claimed, they “are all guilty of crimes against the people of Canada.”

The group’s website accuses the government of various illegal actions, some related to the pandemic. It also claims that the Canadian political system and the country’s constitution are illegitimate.

Members of The Canadian Revolution arrived in Ottawa on Canada Day. They were among the organizers of a July 1 protest on Parliament Hill, attended by a few hundred, to denounce the Liberal government’s policies and its response to the pandemic.

The group also led a smaller protest on July 8, which was attended by about 30 people.

The Canadian Revolution also spearheaded anti-mask demonstrations at Ottawa City Hall on July 15 and 19. The demonstration was part of a series of protests across Canada by small groups objecting to public health directives to wear face masks in indoor settings and elsewhere to help prevent the spread of COVID-19 and to allow businesses and public facilities to reopen to various degrees.

Canadian Revolution’s website boasts about media coverage it attracted with the anti-mask protest at city hall.

A spokesperson for the group said in an email that they were displeased with the government’s COVID-19 response because it “ignored protocols and there was no precedent for the actions taken” to restrict Canadians’ rights.

When asked to elaborate, the spokesperson replied that they were specifically referring to the government ignoring military intelligence about the virus.

A Canadian military intelligence unit issued a warning about the virus in January, CBC reported. It remains unclear when the federal government was first made aware of it.

There were, however, news reports published around the world as early as December 2019 that the city of Wuhan, China, was experiencing an epidemic that proved fatal to some who contracted the virus.

Members of the protest group have speculated on social media that Canadians may face mandatory vaccination against the virus once scientists discover a COVID-19 vaccine.

Vandna Bathia, a political science and health policy professor at Carleton University, said people who are “politically, ideologically opposed to the government” are more likely to distrust public health messaging about the virus.

“People’s beliefs about issues often conformed with their political ideology,” Bathia said. “A lot of the people that were protesting in Ottawa — that’s the political partisan resistance” toward COVID-19 measures.

Bathia added it was important for politicians to put aside partisanship and work together on the pandemic response.

“There’s a pretty strong consensus (among Canadian politicians) in terms of evidence about the disease and how it spreads and what needs to be done,” she said. “There’s more partisanship coming through in terms of other policy-related things.”

The Canadian Revolution has not publicly associated itself with a political party. Its members have shared social media posts from Maxime Bernier, leader of the People’s Party of Canada, and from Conservative MPs Michelle Rempel and Pierre Poilievre on the group’s Facebook page.

Bathia emphasized the importance of hearing from scientists and public health authorities when informing Canadians about the best strategies for combatting COVID-19.

“Bringing in the experts and letting them do some of the talking is another way to build public trust,” Bathia said. “People are much more likely to trust doctors than politicians.”

Bathia said it was also important for public health authorities to remain consistent in their messaging.

“COVID presents a challenge in that perspective because a lot of what we know about it is so preliminary and there’s a lot that we don’t know,” she said. “The mask issue really highlights that.”

In the initial weeks after the pandemic was declared, Canada’s chief public health official, Dr. Theresa Tam, was not recommending the use of face masks by the general public to limit the spread of the novel coronavirus. In May, the Public Health Agency of Canada changed its messaging on masks and began recommending them for wider public use.

By mid-June, the City of Ottawa had implemented a policy of mandatory face masks for public transit users, with exceptions for small children and those with health issues, such as breathing problems.

The mandatory mask rule has since been extended to all indoor public spaces.

The Canadian Revolution campers won’t say how long they plan to stay in Ottawa. But according to the group’s website, it is organizing demonstrations to be held around the start of September.

The same space being occupied by the campers, which is located at the north end Elgin Street between the National War Memorial and the Office of the Prime Minister and Privy Council (formerly known as the Langevin Block), was previously occupied this year by a group supporting climate change advocate Ann Cognito while she lobbied the Liberal government to strengthen its policies to reduce greenhouse gas emissions.

The property is formally under the authority of Public Services and Procurement Canada — the federal department of public works — but other other public agencies, such as the National Capital Commission, the RCMP and Ottawa Police Service, have also been involved in monitoring the use of the space.

In the News: Thursday, July 23

Listen: How we got the story – Episode 5