2 days ago 3 min read
We use cookies to provide a personalized experience for our users. By continuing to browse this site, you give consent for cookies to be used.
Got it!
Home > Capital Currently > A makeover coming for Sparks Street 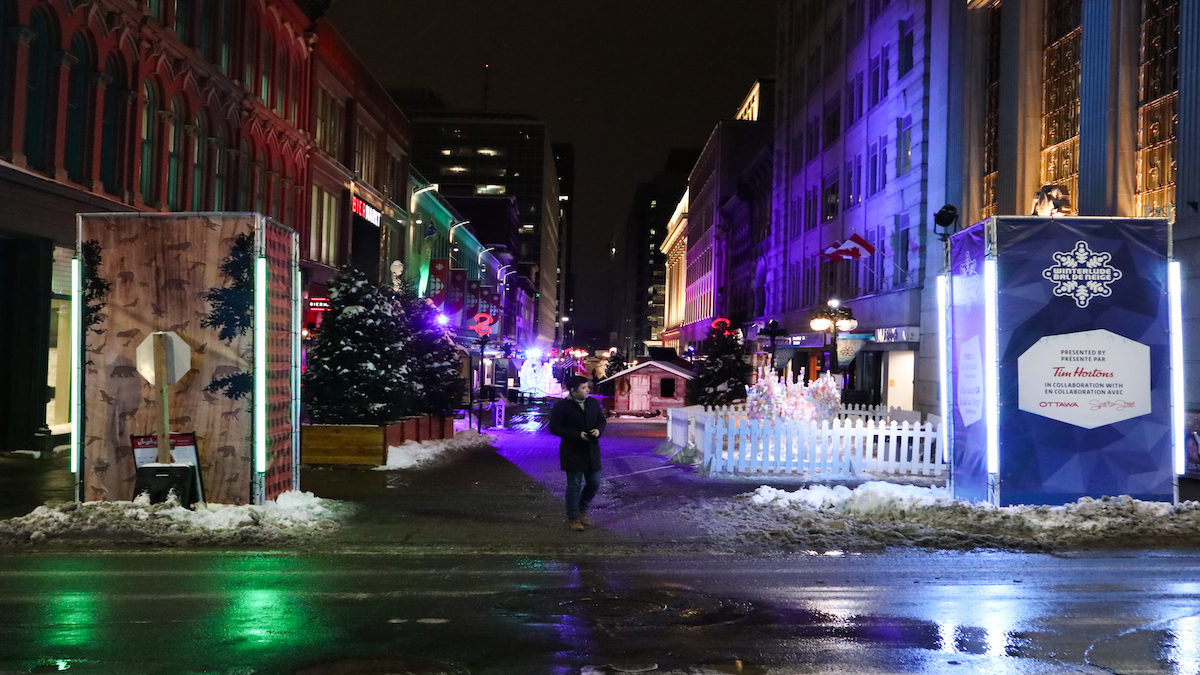 Sparks Street was lit up during Winterlude. Expect more special events as the pedestrian mall gets a makeover. [Photo © Kindra Squire]
Architecture

A makeover coming for Sparks Street

The new design for the Sparks Street pedestrian mall includes plans for an additional 50 shade trees, free wi-fi, moveable seating and opportunities for events such as a pop-up cinema and food festivals.

Sparks Street has been closed to vehicle traffic for 50 years and the plan will enforce that for the first time with physical barriers to stop traffic from going onto the street without permission.

“One big direction in the plan is to put in physical controls at every intersection,” said David Atkinson, lead planner for the project, approved by city council in late November. The plan is use bollards as a way to regulate deliveries so that the street stays a pedestrian zone.

“In the decades to come, Sparks Street will refocus and refine its role as Ottawa’s cultural celebration, entertainment and activity street,” is written in bold type at the top of the page outlining the vision for the development.

“It’s a plan for the public realm,”Atkinson said in an interview. “Although the buildings that frame the street are essentially private spaces there are recommendations for the private buildings to coordinate the colour of their lighting and the animation of the ground floor.”

“The other main driver of the plan is to make it more of a green urban oasis,” said Atkinson, “so it becomes a more preferred route for pedestrians away from vehicles.”

Included in this layout is a plan to develop a core of seasonal events, such as Winterlude or dynamic installations like the Impulse musical seesaw installation that was on Sparks last September.

Right now Sparks Street has 45 benches that are removed during the winter, says Kevin McHale, Executive Director of the Sparks Street BIA. He says he wants to incorporate the new seating into the building plans so that it is available year round.

“If I have it my way, it will be as fast as possible,” McHale said. A pilot project is planned for the spring. The wi-fi can be implemented by integrating it into existing equipment such as lampposts, or new beacons can be built and hidden in the area.

Another design component outlined in the plan is streetscape and art installations, including permanent art near the intersections of each block. “They tell people where they’re at, a little bit of a way-finding moment,” said Atkinson.

The team behind the project includes members of staff from the City of Ottawa, the federal government, the National Capital Commission, the Sparks Street BIA and Mall Authority and consultants from Vlan with Civiliti and WSP.

McHale said the engineering phase comes next, including the wi-fi trial, research on which trees would provide the best canopy, and how much of the plan is doable by spring based on the underground infrastructure.

The plan has been estimated to cost between $50 million and $80 million.

IN THE NEWS: Tuesday, March 3

ICYMI: The animation industry is moving away from white voice actors playing non-white characters. But how are BIPO… https://t.co/k5oUs2jLqa

ICYMI: A new initiative is focused on celebrating Canadian film through drive-in theatres across the country. Read… https://t.co/ogIxMZUpuH

A family that turned a negative diagnosis into an opportunity to spread awareness and positive messages for their c… https://t.co/MRTH4VQkoQ

An Ottawa executive offers tips based on what she has learned about working remotely and her predictions for how th… https://t.co/roSuccyswa