2 weeks ago 0 9 min read
We use cookies to provide a personalized experience for our users. By continuing to browse this site, you give consent for cookies to be used.
Got it!
Home > Multiculturalism > As 401,000 newcomers reach Canada in 2021, members of immigrant families reflect on their experiences 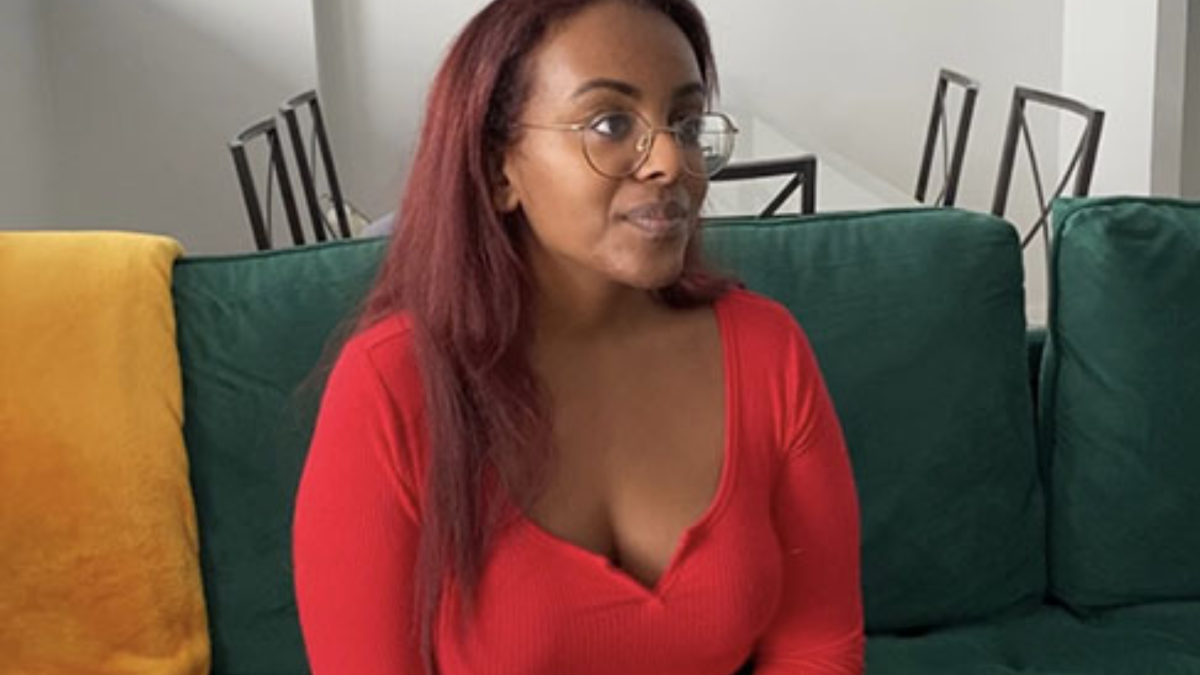 Hermona Kuluberhan is a 27-year-old Carleton University graduate student. She was born and raised in Ottawa, but says, "I always do mention my heritage. I'm Ethiopian and Eritrean. There’s all these different aspects of my identity that I make sure to communicate.” [Photo @ Menna Nayel].
Bridging Communities

As 401,000 newcomers reach Canada in 2021, members of immigrant families reflect on their experiences

Despite the pandemic, Canada welcomed 401,000 immigrants in 2021. According to CIC News, 45,000 immigrants arrived in September alone, one of the highest monthly totals in the country’s history.

Although immigration numbers spiked in 2021, Canada actually struggled to accept immigrants at the beginning of the COVID-19 pandemic. In April 2020, during the month just after the global pandemic was declared, only 4,000 people were able to enter the country as immigrants.

But Canada’s sustained commitment to welcoming newcomers doesn’t mean every immigrant’s experience in this country is a positive one.

As the new year begins, Capital Current offers some perspectives from immigrants and members of immigrant families as they reflect on their lives in Canada.

Azza Abdel-Aziz is a wife, mother of three, and assistant teacher living in Ottawa. Originally from Egypt, Abdel-Aziz and her family lived in Kuwait for a few years before immigrating to Canada.

“I used to be a (fully qualified) class teacher,” she told Capital Current. “I taught Arabs and non-Arabs Arabic…In Canada they are ignoring all the experience I have, they want a Canadian certificate. I am working as a teacher’s assistant.”

Abdel-Aziz and her family moved to Canada in 2008 “for a better life and better future for our children. Kuwait would not have lasted forever. After they graduate high school, there is no future there at universities, so we would have had to go to Egypt,” she said in Arabic.

Now, 13 years later, she regrets her family’s decision. “I’m not happy here at all. Life here is better in terms of (her children’s) careers. if you don’t have family around you, it’s really devastating.”

“The careers of my children do not equate to the time I lost with my family at all.”

Because her children struggled to fit in Canada’s culture, Abdel-Aziz explained, “it was a hard time for them, being themselves and how they were raised and looking good in front of their Canadian peers. Canadians were always bullying them. They didn’t like our Arabic manners. They had their own opinions.”

Then, as her children attempted to conform with Canadian culture, they began to slowly forget their own. Finally, Abdel-Aziz said, they started “mocking things in our religion, traditions and culture.”

She expressed her dismay over the disparities between her, and her children’s ideologies and mindsets: “They are a bit distant from our religion here.”

Abdel-Aziz says she also struggles with missing her own family. “Every time I go (to Egypt), I find my mother older than before. I feel like I lost years away from her. I can never make up for them, no matter what I do.”

The mother of three compares the pros and cons of living in Canada and concludes that if she could go back in time, she would not immigrate to Canada.

“The careers of my children do not equate to the time I lost with my family at all,” Abdel-Aziz explained.

Reflecting back on her family’s life before moving to Canada, Abdel-Aziz said: “We didn’t have any problems. Not financially, emotionally, or anything. We had a good life with a large community of friends. I was near Egypt. Whenever I wanted to go, I went.”

Although Abdel-Aziz’s struggles are common and valid, not everyone experiences them.

The family of Susana Liu, a 22-year-old undergraduate student at Carleton University immigrated to Canada in 2014.

Born and raised in Ecuador, Liu is of Chinese descent. Liu’s family moved to Canada because “my parents wanted a better opportunity for our education and career,” she said.

Liu experienced a major culture shock when she first came to Canada. “In South America, everyone is so friendly, energetic. When I came here, everybody’s so serious. … You need to think of university, you need to get grades.”

Liu also noticed “how empathetic people are,” however. “People make you put themselves in other people’s shoes. South America really is not like that — (it’s) just think about yourself (there).”

Despite living in Ecuador for most of her life, she said, “I feel 100 per cent more comfortable (in Canada).”

“Back in South America, because I’m Chinese, I am such a minority group. I didn’t feel like I belonged there,” said Liu. “But when I moved here, I really don’t fit with the Chinese people because I’m not quite Chinese, but neither am South America.”

Nevertheless, Liu said, “people here tend to more be more affectionate. No matter what your ethnicity was or how you were raised, we still love you for who you are. I feel more accepted.”

Although she is comfortable now, Liu did experience “major homesickness because I didn’t know anybody — making friends from scratch, trying to find your place, not really fitting in.”

Once she visited Ecuador again for vacation. “I was, like, I don’t belong here anymore.”

The feeling of not fitting in anywhere is not uncommon for immigrant children echoed in a humorous video posted online by Subhi Taha, who is a social media influencer. He said in the video that, “I’m kind of this floating entity lost between two lands questioning ‘What is home for me?’”

Similarly, 24-year-old Carleton University graduate student Rajpreet Sahota says, “I never fully regarded myself as a Canadian, but I never really saw myself as a full Indian either.”

Unlike Liu, Sahota was born in Canada. “I never had the same experiences that my parents did. That made me question who I was for a very long time, until I just started calling myself a first-generation Canadian, because it was just the mixture of the two.”

Although Sahota’s parents do not view her as an Indian, “because I don’t have all of the culture aspects of being Indian,” she said, they still tried to instill their culture and faith in their children by speaking Punjabi, taking them to a Sikh temple frequently and sending them to Punjabi Sikh camp every summer.

“A big part of being an immigrant or coming from immigrant parents is the fact that they’re really hard working.”

As a follower of the Sikh religion, Sahota did not find a lot of representation of her religion in Canadian culture and media. “I really didn’t relate to being fully Canadian, just because I didn’t see myself represented in the media and society.”

Sahota explained why her parents moved to Canada: “Because the whole concept of just wanting a better life.” She said her father “thought there would be a lot more opportunities for him to grow and have success. But also, because he got married and, obviously, children were a part of that equation, he wanted a better life for his kids.”

For her parents, the experience, Sahota said, “was a hard journey because they didn’t know anyone, and their entire family was back home. They didn’t have that much money either. So they both had to work factory jobs to save up for their first apartment.

“A big part of being an immigrant or coming from immigrant parents is the fact that they’re really hard working,” she said.

“My parents came to Canada as refugees,” she said. “They left Ethiopia during the Qey Shibir, which means the Red Terror. … A lot of people were dying. It was an authoritarian government and a lot of people fled during that time. My parents went to Greece, and after a couple of years, they came to Canada to build a life for themselves.”

When asked where she is from, Kuluberhan says: “I’m born and raised in Ottawa, but I always do mention my heritage. I’m Ethiopian and Eritrean. There’s all these different aspects of my identity that I make sure to communicate.”

Kuluberhan explained that, “I lost my mother tongue because I only spoke Amharic until I was six years old.”

Her parents were concerned that she would be not be able to learn English and French, “so I was told don’t speak your mother language.”

Kuluberhan said she regrets losing the Amharic language. “There’s certain things that you can only communicate about yourself and your identity in your mother tongue, that you can’t capture in a foreign language. … I regret that I don’t have that language anymore.”

In an attempt to keep her connected to his culture, Kuluberhan said her father had organized a communal Amharic school “where we all got together and we learned the alphabet and we tried to learn the language again.

“There were these attempts to reconnect us to the culture and to the language,” she said. Despite that, she explained, “I very much grew up in my Ethiopian and Eritrean community. But it’s just the language that I lost.”

“I just felt really constrained by all these traditional, cultural, religious expectations.”

Being the eldest child and daughter, Kuluberhan said, “There were certain traditional expectations that were intensified by religious expectations that I always struggled against. I rejected these things. Because of that, there was a bit of a disconnect between myself and my parents.”

“I just really felt constrained by all these traditional, cultural, religious expectations,” she explained.

As she grew older, Kuluberhan said, “I begin to recognize my positionality as a black woman in Canada. That desire to reconnect with my heritage and my culture, it’s coming back.

“In connecting with my parents,” she added, “it’s rebuilding that bridge that I had maybe burned in reduction of expectations placed on me as a woman. … What I’m experiencing is a desire to reconnect to my heritage on my own terms.”

As a child of immigrants, Kuluberhan said: “There’s a feeling of displacement, of ‘Where do I belong?’ I don’t think that’s unique to me. I think that’s like every immigrant child.”

Pet power: My pandemic puppy kept me afloat during a time of loss