3 days ago 0 4 min read
We use cookies to provide a personalized experience for our users. By continuing to browse this site, you give consent for cookies to be used.
Got it!
Home > Remembrance Day > As poppy campaign marks 100 years in Canada, Ottawa philanthropist remembered for pioneering veterans’ aid 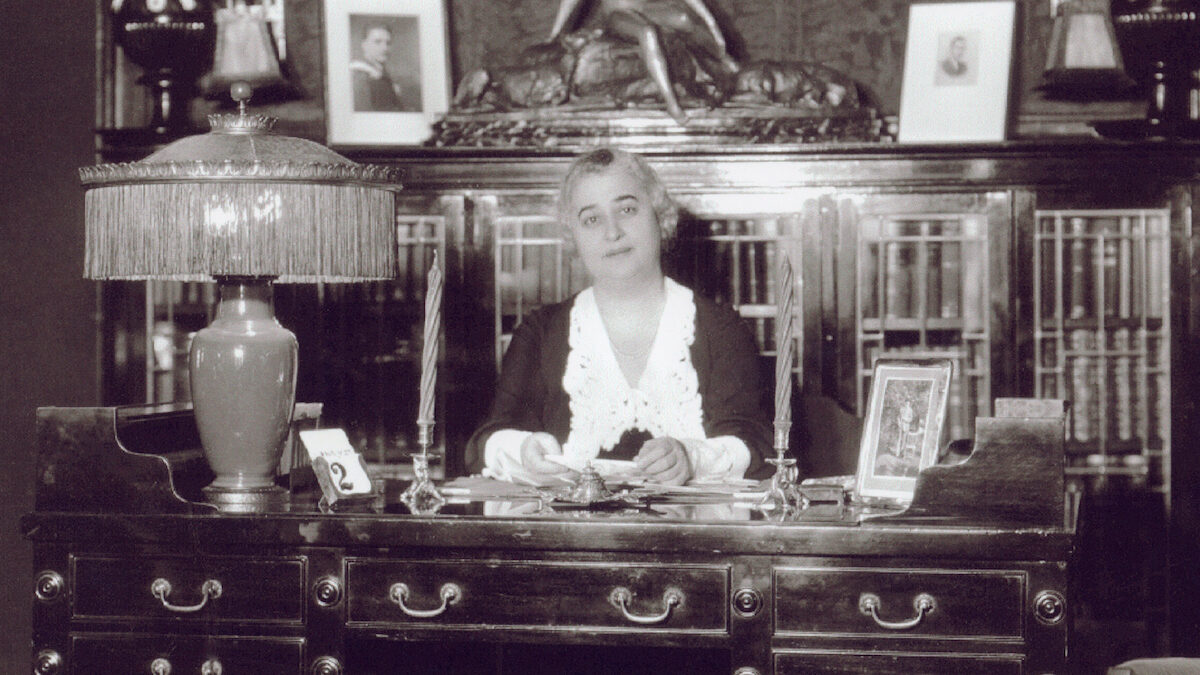 Lillian Bilsky Freiman is seen here in in her Ottawa home, the place from which she organized much of her philanthropic work to help veterans, as well as many other causes. [Photo courtesy Ottawa Jewish Archive, OJA 1-567-01]
Canada

When he thinks about the annual Remembrance Day poppy campaign, Chief Warrant Office (Ret’d) Stéphane Guy said he’s motivated by the chance to help to veterans.

It’s the same sentiment that spurred many of the poppy’s earliest champions – including an Ottawa philanthropist who helped grow the campaign in Canada a century ago.

“This responsibility to care for injured military people — it really is part of what I want to do in my life,” said Guy. “And it gives me this opportunity to do that.”

As president of the Barrhaven Legion, one of hundreds of local chapters of the Royal Canadian Legion that are carrying out poppy campaigns ahead of this year’s Nov. 11 ceremonies, Guy plays a key role in the fundraising drive at his local branch. Some of the causes supported by his chapter include the training of service dogs and the acquisition of beds for former soldiers at Ottawa’s Perley Rideau health centre for veterans and seniors.

The annual poppy campaign is a major undertaking. In 2018, the most recent year for which the Legion has released national figures, it distributed more than 19 million poppies, and contributed at least $15 million to support Canadian veterans and their families.

This year’s campaign marks the 100th anniversary of the poppy as an official symbol of remembrance in Canada.

“The poppy symbol itself, it’s also quite dear to my heart,” said Guy. “I lived in Europe for three years, and I visited a lot of battlegrounds, including Flanders Fields (in Belgium).

“Driving in Europe, you see the poppy flowers quite often,” he added, describing how the scene conjures thoughts of the famous poem In Flanders Fields by John McCrae, a poet and First World War medical officer with the Canadian army.

“So when you think of it, and then think of the poem, it rings a bell in my head to say that the poppy symbol really reflects on the sacrifice of our military members,” said Guy. “I think it’s one of the best ways that Canadians have found to physically represent the sacrifice of our people.”

After the iconic poppy was immortalized in McCrae’s poem, first published in 1915, it caught the attention of community leaders in many of the countries that had sent troops to the First World War. They embraced the symbol as they looked to find ways to help the hundreds of thousands of veterans returning home — many of them injured – including 267,813 veterans repatriated to Canada, in addition to the estimated 60,000 Canadian war dead.

Lakehead University history professor Michel Beaulieu, who has researched the poppy’s origins in Canada, said that when some veterans returned home from the war, they became disillusioned that they heard “much (about) the heroes who died, but no mention of the men who lived.”

Beaulieu said the conversation around the poppy marked a shift because its advocates were focused as much on fundraising for veterans in need, as they were on the poppy’s symbolic value.

As is often the case with history, many individuals were involved in realizing this vision.

In the United States, Moina Michael became known as “the poppy lady” for writing a 1918 poem in response to McCrae’s piece and advancing the idea of selling poppies to raise funds for disabled veterans, leading to the adoption of the poppy as a symbol of remembrance by the American Legion Auxiliary in 1921.

Around the same time, Anna Guérin of France travelled through the United States, helping to popularize the poppy as a means of fundraising for her charity that supported war orphans in France. She later visited Britain and Canada to encourage veterans’ groups in those countries to adopt the campaign as well.

Guérin’s 1921 trip to Canada, where she met with members of the Great War Veterans Association — the precursor the Royal Canadian Legion — is why the Legion officially recognizes Guérin as the founder of the poppy in Canada.

Lakehead University history professor David Ratz, with whom Beaulieu co-authored the book Thunder Bay and the First World War: 1914-1919, said that the meetings took place over three days in July 1921 at the Prince Arthur Hotel in present-day Thunder Bay, Ont. Meeting minutes and local newspaper coverage show that the urgent need to aide veterans was a major focus of those meetings.

On July 5, day two of the meetings with Guérin, the Great War Veterans Association passed a motion adopting the poppy symbol and campaign. The funds raised were initially to be shared between Canadian veterans and Guérin’s charity for war orphans in France. The veterans’ association charged its local branches with organizing the campaign. The model is still used today.

That’s when a tenacious Ottawa philanthropist, Lillian Bilsky Freiman, entered the story, helping the poppy campaign to deepen its roots in Canada, and cementing the symbol’s association with providing aide to veterans.

Freiman, who had already been involved in knitting blankets in her home during the war to send to veterans overseas, became a convenor of the national poppy committee and the convenor of the Ottawa campaign, serving in those roles from 1922 until her death in 1940.

“She held the torch and passed it on,” said historian and archivist Teigan Goldsmith.

Goldsmith, the executive director of the Ottawa Jewish Historical Society, has been researching Freiman for a presentation she will give Nov. 10 about the legacy of her community service work.

“She was selfless,” says Goldsmith. “She didn’t do it for the praise. She did it because she loved people. She was a busy woman, despite the fact that she would never say that she was busy.”

Some sources, such as the Department of Canadian Heritage, have stated that the first poppies in Canada were produced at Freiman’s house in downtown Ottawa, which today is the Army Officer’s Mess. Danny Martin, who speaks for the national Legion on historical matters, said this detail has not been verified, but he says that Freiman played a central role in establishing the poppy campaign in Ottawa.

Beaulieu said that even if the poppies made at Freiman’s house were not the first ones produced in Canada, it doesn’t diminish her contribution towards growing the campaign.

He noted that his research shows poppies were also being produced in the Thunder Bay region by 1921, which he says makes sense given the logistics of moving supplies at that time.

“I’m the type of historian where I always kind of balk at spending time trying to find out what was the first,” said Beaulieu, noting that the significance of contributions made by individuals like Freiman, or by women’s organizations more broadly to the war relief efforts, can be lost in these debates.

Freiman’s dedication to the poppy campaign and devotion to helping veterans led her to be named an honourary lifetime member of the Royal Canadian Legion in 1933, the first woman ever to receive that distinction.

By telling Freiman’s story, Goldsmith said she hopes that the work Freiman did on behalf of veterans will become better known beyond Ottawa’s Jewish community, where she is already an icon.

“It wasn’t just the Jewish community,” said Goldsmith. “It was the Ottawa community, Canada as a whole. She was so involved in everything. It didn’t matter who you were, what religion, what race, what creed. She didn’t care. She was here to help everybody.”

Her legacy is also survived through the poppy campaign itself, where volunteers like Guy continue to embody her enthusiasm for helping veterans.

“The Legion is there to support the veterans,” said Guy. “That’s our main purpose.”