4 days ago 0 6 min read
We use cookies to provide a personalized experience for our users. By continuing to browse this site, you give consent for cookies to be used.
Got it!
Home > News > Bank of Canada Museum acquires 1911 silver dollar deemed country’s greatest rarity 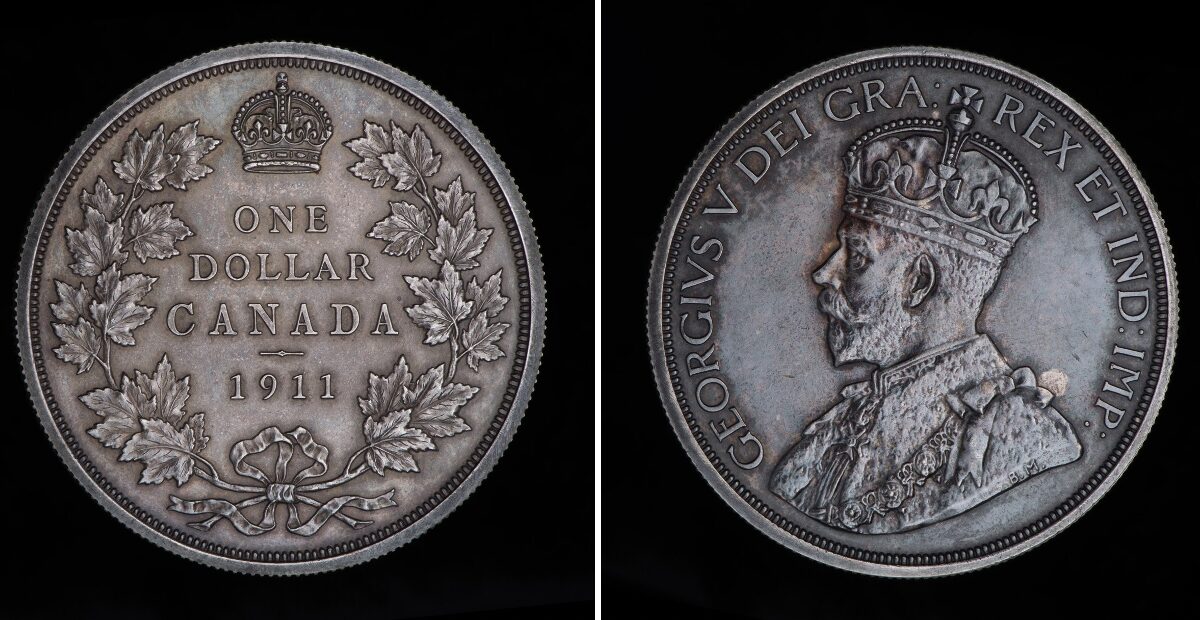 This prototype of the 1911 silver dollar, which was never mass produced, is one of just three known examples of the coin, widely viewed among collectors as the rarest and most sought-after Canadian coin specimen. It was acquired in the past year by the Bank of Canada Museum from a private Canadian collector. [Photo © Bank of Canada Museum, NCC 2021.21.4]
Arts & Culture

After being the apple of many a coin collector’s eye, “The Emperor” has finally made its way into the Bank of Canada Museum’s permanent collection.

The 1911 silver dollar had been in private hands for more than 60 years, but was recently acquired by the museum from a Canadian collector and will now have a permanent home in the National Currency Collection at the Bank Street heritage centre.

Unlike most coins that were mass produced, the 1911 silver dollar was never put into circulation, and only three trial strikes of the planned coin — or tests — were ever created: one in lead and two in silver.

For collectors, the rarer a coin is the more desirable and valuable it is likely to be.

After being catalogued as pattern coins, which are not intended for circulation, the 1911 silver dollar strikes had quite the journey around the world, turning up in collections in the United States, Australia, the United Kingdom and, of course, Canada. The Emperor was purchased at a public coin auction in 2003 for $1.1 million by a George H. Cook, a collector from Calgary.

The Bank of Canada Museum recently posted an article detailing how the coin finally came to be in its possession this past year: “Mr. Cook held onto the coin for nearly two decades until he passed away in 2018, and his collection was auctioned in the United States. A prominent Canadian numismatic dealer acquired the coin and offered it to the Bank of Canada Museum to ensure that Canada’s most important coin remains within Canada’s public cultural sphere.”

The three 1911 silver dollar specimens — nicknamed Emperor, King and Prince — are the three most coveted items among collectors of Canadian coins, and their uniting in the Bank of Canada Museum collection is the first time they have all been together since they were produced more than 110 years ago. It’s a special moment for all Canadian coin and history lovers alike.

What follows is a Q&A conversation about Canada’s famous 1911 silver dollar with David Bergeron, curator of the Bank of Canada Museum. The interview has been edited for length and clarity.

Q: What is so important about the 1911 silver dollar?

A: This coin was only one of three knowns, two in silver and one trial strike in lead. Because one of the silver examples is on long-term loan from the Royal Mint in the United Kingdom, the example recently acquired by the museum was the only one in private hands available for purchase. The coin is rare because the program to mass-produce and put it into circulation was scrapped before any coins were struck in Canada. The only examples of the coin were struck at the Royal Mint in England. The reverse die, the side of the coin containing the year and the denomination, was apparently destroyed before production even began. And the obverse die, the side with the bust of King George V, was preserved until the production of silver dollars in 1936. It is this die that was used to strike the 1936 silver dollars.

Q: What makes it so coveted by collectors and museums?

A: The fact that only one example had remained potentially available for purchase meant that it was a highly prized trophy for any coin collector because of its rarity.

Q: Is anything known about previous owners of the coin?

A: Before becoming available to the public, the coin apparently belonged to the family of the Deputy Mint Master of the Royal Mint, William Frey Ellison-McCartney. When McCartney retired from the Royal Mint in 1912, he took it with him when he went on to become Governor of Tasmania. McCartney died in 1924 and the 1911 dollar was passed on to his three children. The coin was sold to a London dealer, Blair A. Seaby in 1960. From 1960 to 2021, the coin changed hands several times, landing in the collection of a couple of major Canadian collectors including John McKay-Clements, who was a businessman and former mayor of Haileybury, Ontario (he owned the coin from 1965 until his death in 1976), and George H. Cook of Calgary (2003-2018), an entrepreneur and last owner of the coin before he passed away in 2018. Between McKay-Clements and Cook, the coin changed hands on several occasions among Canadian and American coin dealers.

Q: Has it ever been in museum hands before?

A: This coin had always remained potentially available for purchase until the Bank of Canada Museum acquired it in 2021. It was first made available to the public in 1960. A trial strike of the coin made of lead was discovered in 1977. It likely came with the dies intended to mass-produce the coin in Canada. But the lead sample sat for years in the drawer of a desk in the Finance Department on Parliament Hill until its existence was discovered in a move of the department’s offices in 1977.

Q: What does it mean for the museum to have the coin as part of its collection?

A: In the numismatic/coin collecting community, the 1911 is the most coveted coin. For decades, the Bank of Canada Museum could display and tell the story of the 1911 dollar thanks to a long-term loan from the Royal Mint, UK. But the Museum, and by extension the Canadian public, did not have an example of this important and historically significant coin to call their own, until now. In the hands of the Bank of Canada Museum, the coin will properly be cared for, and prominently displayed in the permanent galleries of the museum, in Ottawa, for everyone to enjoy and appreciate. And with the coin’s cultural property designation, it can never again leave Canada.

Q: When will the coin be available for public viewing?

Soft news is big news: So-called 'feminine' subjects have major cultural and economic impacts — whether you care or not

Staying afloat: The trials and tribulations of opening a family business during the pandemic