5 days ago 0 3 min read
We use cookies to provide a personalized experience for our users. By continuing to browse this site, you give consent for cookies to be used.
Got it!
Home > News > Social Issues > Building blocks: B.C. city takes aim at homelessness with two temporary modular housing projects 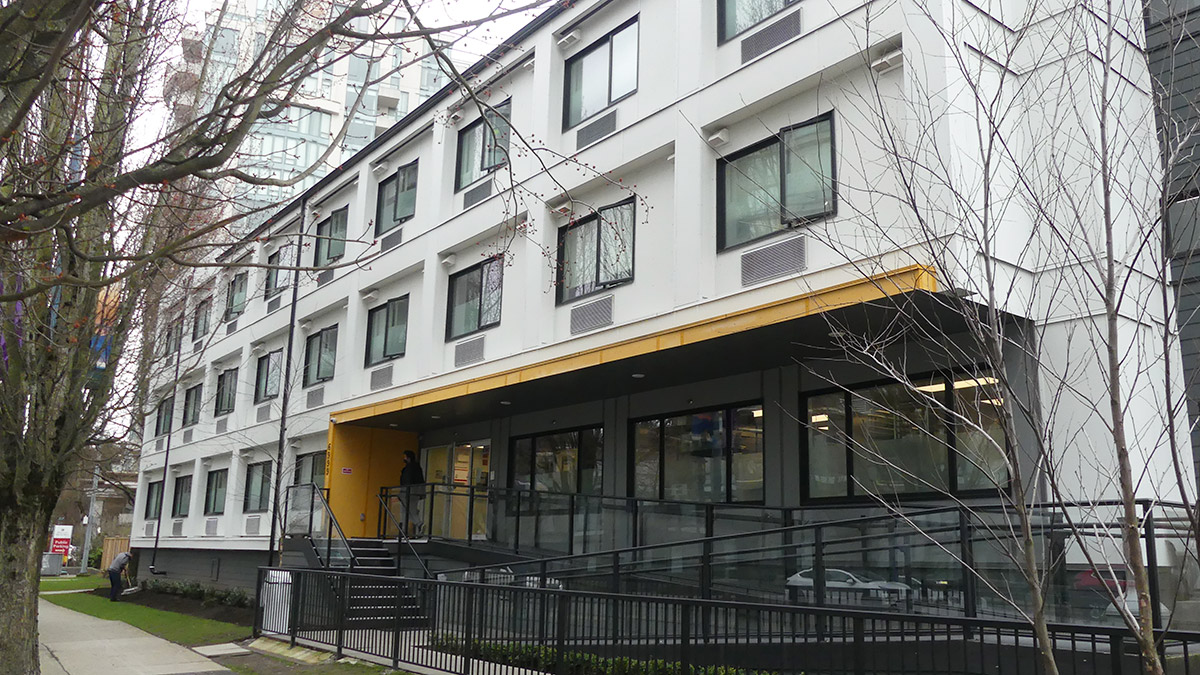 Each furnished unit in Richmond, B.C.'s Alderbridge modular housing complex measures about 30 square metres and includes a bed, a bathroom, a stovetop and a fridge. [Photo © Tobin Ng]
British Columbia

For many residents of Richmond, B.C., conversations about temporary modular housing invoke memories of protests and petitions.

Three years ago, the plan to build a supportive housing project in the heart of the Vancouver suburb drew intense public opposition. Hundreds of protestors rallied at the proposed site, while a petition against the proposal garnered more than 1,000 signatures.

However, as Richmond prepares to build its second temporary modular building in the Bridgeport area of the city, the response has been far less polarized.

“The differences are basically night and day between this complex and that complex, in terms of the public outcry,” said Coun. Carol Day. “It’s been almost nothing.”

The modular buildings are considered temporary because they don’t require excavation, providing flexibility as they can be assembled and relocated on vacant and underused lots.

Since 2017, 12 temporary modular buildings have been completed and occupied across Vancouver.

“We really come from that housing-first approach, where we’ll meet them where they’re at, at that time, if they’re not able to quit substances,” said Edwards.

Richmond’s first temporary modular building opened in 2019. Situated on Alderbridge Way, a main thoroughfare in the city centre, the 40-unit complex is within walking distance of Richmond Hospital and local social services. The building is also in a residential area and surrounded by high-rise towers.

Leading up to the city’s approval of the Alderbridge development plan, many members of the neighbourhood expressed concern about community safety. Residents packed community meetings and filled the city council chamber during two nights of public hearings. Critics expressed fears about increased crime, but social problems never materialized.

Coun. Linda McPhail said the controversy around the Alderbridge complex presented lessons for the city, including the importance of engaging residents and businesses through a community advisory committee.

“I think what we’ve learned along the way is that you really need to have a good consultation process with the community,” she said. “They will be afraid, they will be nervous, they will have questions — and I think it’s really important that you do your best to answer those questions.”

The community response to the Bridgeport plan stands in stark contrast, chiefly because the proposed complex is set to be built in a more industrial area of the city. However, Day said Richmond residents’ views on temporary modular housing may have also shifted in light of the success of the first complex.

“It was heart-wrenching and very, very difficult to hear these pleas from all these people that were, to be honest, quite ignorant of the issue and unable to see the positive side of modular housing,” said Day. “So, I’m really proud of the society — that we’ve gone from that place to this place, a lot better place to be in.”

The proposal to build a second complex comes amid the provincial opioid crisis and the sharp growth of the homeless population in the city. The 2020 Metro Vancouver Homeless Count found that there were 85 homeless individuals in Richmond, a 21 per cent increase from 2017.

Edwards said the plan to build a second complex reflects the demand for supportive housing.

“When we opened, we had 100 applications for 40 units, and I would say 90 of those applications met our mandate,” she recalled. “We really did have double the amount of applications than we had availability in this location.”

The City of Richmond’s 2019-2029 homelessness strategy identified “significant unmet needs at all points of the housing continuum.” Researchers behind the report estimated the city would need to supply 700 new low-income rentals and 1,300 very low-income rentals to support new residents between 2016 and 2026.

The proposed second temporary modular complex would provide 40 new units. However, both the Alderbridge complex and the proposed Bridgeport complex are stopgap measures while more permanent housing is built. The Alderbridge complex is operating on a five-year permit, while the Bridgeport complex recently secured a three-year permit, which could be extended for an additional three years.

De Whalen, president of the Richmond Poverty Reduction Coalition, said there remains a shortage of permanent affordable housing in the city.

“The purpose of this kind of housing is that people don’t stay there forever,” she said. “They cycle in, they get support, they stabilize and then they move on — but they’ve got nowhere to move on to.”

Edwards said 28 of the Alderbridge complex’s original residents still live in the building. Others have quit substance use and returned to living with family, sought treatment and moved on to “sober housing,” or been evicted because of interpersonal conflicts that became violent. Of those who left, three individuals found independent market housing through B.C. Housing subsidies.

“They (B.C. Housing) sort of match an income assistance amount for individuals to find independent market housing,” said Edwards. “Obviously, that can be a challenge, because as you know, if you live in Richmond, finding anything for under $1,000-a-month rent is pretty difficult.”

It’s a problem that has only been exacerbated by Richmond’s rising real estate prices, as individuals continue to be priced out of the rental market.

McPhail said the city is reviewing rezoning application policies that require developers to either build affordable housing units or contribute to the city’s affordable housing fund. Under the current strategy, multi-family and mixed-use developments with more than 60 residential units are required to dedicate at least 10 per cent of the building area to low-end market rental units.

But Edwards said there needs to be more funding to support development across the affordable housing continuum.

“I really see subsidized housing through a provincial strategy as the only way to fix it,” she said. “I think there really needs to be a wide range of everything from completely independent, self-contained units to the model that we have, that helps folks get stabilized.”

“It’s a mess, briefly,” she said. “We need a huge influx of capital funding from all levels of government to make sure that people are housed properly, adequately, appropriately and in dignity.”