4 days ago 0 6 min read
We use cookies to provide a personalized experience for our users. By continuing to browse this site, you give consent for cookies to be used.
Got it!
Home > News > Police > Downtown braces for more after a week of trucker-led protest spouting anti-vaccine messages, racist taunts 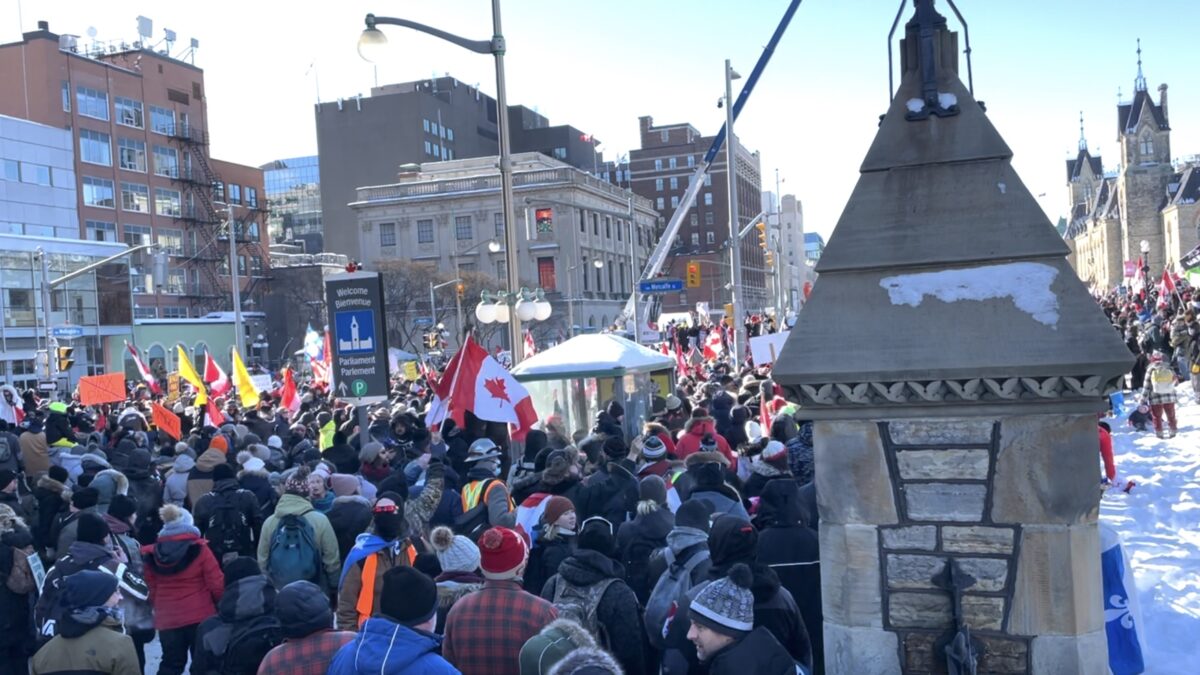 Protestors march down Wellington Street in front of the Parliament Buildings this past Sunday. [Photo © Mason Bugaresti]
Community

Thousands of people protesting COVID-19 restrictions and hundreds of tractor trailers from across Canada converged on Parliament Hill on the last weekend of January, a public demonstration that has brought property damage, clogged streets, waving flags and the constant sound of truck horns blaring.

What started as a trucker convoy heading east to Ottawa from B.C. to protest mandatory vaccination for cross-border truckers became a rallying cry for many Canadians opposed to COVID-19 restrictions. But the demonstration, that some call an occupation, now heading into its second weekend, has prompted harsh criticism from local residents and politicians because of the disruption of daily life in the capital.

Today Ottawa police have announced the deployment of 150 officers into the downtown core and a plan to place barriers to travel downtown for an anticipated influx of protesters to buttress the 250 or so who remained in the city this past week. As well, the federal government has authorized the use of RCMP officers to help the Ottawa force police the protest.

The protest has had repercussions in federal politics, plunging the federal Conservative party into turmoil over how to respond to the demonstrators and contributing to the ouster of party leader Erin O’Toole.

Protesters are adamant that they will not leave the Parliament Hill area and would continue to occupy Wellington Street until all COVID-19 restrictions — not just the vaccine mandate for cross-border truckers — have been lifted. Many of these restrictions have been imposed by provincial governments and this weekend protests are expected in Quebec City, Toronto, Winnipeg and Edmonton.

Protester Roy Romero said he drove into Ottawa from Montreal on Jan. 29 to protest vaccine requirements at his job in Montreal’s UPS fulfillment centre.

“They’re trying to scare us at work, but most of us aren’t even vaccinated anyway, so it’s stupid to begin with,” said Romero.

“People will exploit this protest for their own gain. These are people who are more extreme than any of the organizers, or any of those people driving the trucks. They will try to promote views that are far outside our political discourse and things the majority of Canadians will find completely unacceptable.”

Demonstrators continued to shut down Wellington and parts of several streets of downtown Ottawa. But the aim of the protest became increasingly unclear — anti-lockdown arguments became blurred by anti-government attacks and flashes of darker messages — including anti-Semitism and anti-Black racism.

Flags bearing the Nazi swastika were present. While there were many Canadian flags and black flags with the message “F#ck Trudeau” on prominent display, there were also Confederate flags — the Civil War-era banner of pro-slavery states now widely viewed as a symbol of racism — and a banner with the American Revolution-era message “Don’t Tread on Me”.

Elizabeth Simons, deputy director of the Canadian Anti-Hate Network, predicted accurately in an interview ahead of the protests that the trucker convoy would be used by some far-right groups to display and promote hateful, fringe messages.

“People will exploit this protest for their own gain. These are people who are more extreme than any of the organizers, or any of those people driving the trucks,” said Simons. “They will try to promote views that are far outside our political discourse and things the majority of Canadians will find completely unacceptable.”

Some signs compared COVID-19 restrictions to the 1935 Nuremberg Laws imposed by Nazi Germany stripping Jewish people of their German citizenship. Holocaust comparisons were rampant on Parliament Hill with signs attempting to draw parallels between vaccine rules and genocide.

“Dear Trudeau, Hitler would be proud,” read one sign.

Somerset Coun. Catherine McKenney warned residents of their area to stay far away from downtown on the opening weekend of the protest and led condemnation of the demonstrators’ impact on the Centretown neighbourhood in the days that followed.

“We are a city that is used to protests. And whether we agree or not, everyone has a right to peaceful protest,” said McKenney, but added that “we have seen anti-Semitic, racist and xenophobic messages coming out of the convoy.”

Before the truckers arrived, McKenney had warned the convoy and demonstrators on foot to “Come in peace, come respectfully, or not come.”

“We have seen anti-Semitic, racist and xenophobic messages coming out of the convoy.”

But some protesters did little to honour McKenney’s wishes as vandalism and harassment took place across downtown within the first 48 hours of the protest.

On Sunday evening, the Ottawa Police had released a statement saying that each day the protestors remain downtown will cost the city an additional $800,000 for policing services.

In the early days of the protest, an anti-vaccine mandate sign and an upside-down Canadian flag were placed on the Terry Fox on Wellington Street. A protester was seen on video dancing on the Tomb of the Unknown Soldier, and other protesters urinated on the National War Memorial.

As the first week of the protest continued, the truckers and their supporters increasingly drew the ire of local residents lamenting the downtown gridlock and constant noise.

Before the announcement of new measures Friday morning, the Ottawa Police de-escalation strategy — to minimize arrests and confrontations to avoid the protest turning violent — has come under fire from critics who say that police need to intervene to protect downtown residents.