3 days ago 0 4 min read
We use cookies to provide a personalized experience for our users. By continuing to browse this site, you give consent for cookies to be used.
Got it!
Home > News > Transit > City of Ottawa remembers the victims of Friday’s bus crash; Transportation Safety Board called in 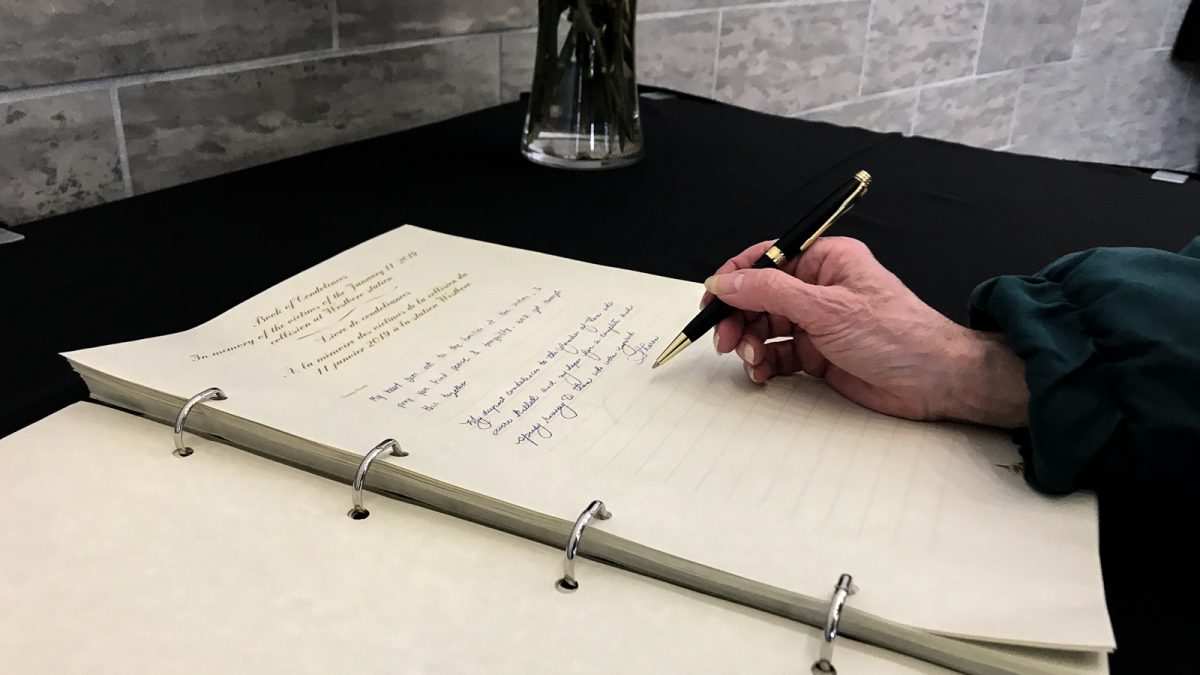 The Book of Condolence will be available for signing until Jan. 20. [Photo @ Catherine Kelly]
Capital Currently

City of Ottawa remembers the victims of Friday’s bus crash; Transportation Safety Board called in

The flags outside City Hall are at half-staff and barely moved with the wind. Inside people stand in line, quietly waiting to sign a Book of Condolences in remembrance of those who died in the tragic OC Transpo bus crash this past Friday.

The city of Ottawa is in mourning.

At the start of the afternoon rush hour on Jan. 11, an OC Transpo double-decker bus collided with a bus shelter at Westboro Transit Station. The crash killed three public servants, identified as Anja Van Beek, 65, Judy Booth, 57, and Bruce Thomlinson, 56. All three were on the bus, but investigators do not know where they were sitting, Ottawa Police Chief Charles Bordeleau said Wednesday afternoon. The police investigation has now concluded no one on the platform was killed.

Media reports say Booth’s funeral will be held on Saturday afternoon in Almonte. The past president of the North Lanark Highland Games and proud member of the Ottawa Highlanders pipe band will be saluted by her musical colleagues.

A service has also been arranged for Thomlinson on Jan. 18. There is no word yet on funeral arrangements for Van Beek.

While the Ottawa Police investigate the cause of the crash and the head of the Transportation Safety Board calls for measures to improve bus safety in collisions, people are also taking to time to remember.

Bordeleau added that the Ottawa Police remain the lead agency in the investigation.

“We are examining every aspect of this collision,” Bordeleau said in his statement. He pledged to alert OC Transpo of any findings that relate to bus and road safety.

They have interviewed about 80 per cent of the passengers on the bus, he said. Some people have not come forward and he urged those not contacted to reach out.

The process is expected to take a several weeks, he said. A key next step will be the examination of the bus itself along with any computer records on the vehicle.

On Monday afternoon, Ottawa South MPP, John Fraser, was one of many who came to City Hall recently to leave a personal message in the book of condolences. Fraser said he believes expressing sympathy is important in a time of grieving.

“It’s an incredible loss for families, for our communities,” said Fraser after signing the book. “(It was) so sudden – we all expect our loved ones to come home from work. ”

Both an online and paper Book of Condolences, which is at a small table in City Hall, will be available until Jan. 20. So far some 659 people have signed the online book.

The city has also designated sites at the Westboro Station for those wishing to leave a memento at the scene of the crash. One is inside the station on the lower level near the crash site. The other is at the northwest corner of Scott and Athlone streets. The city has asked that any gathering or vigil in support of the victims take place on the sidewalk of Scott Street in front of the station.

The accident is the second deadly crash involving a double-decker bus in five and a half years, but Ottawa Mayor Jim Watson has said he believes the buses are safe.