3 days ago 0 5 min read
We use cookies to provide a personalized experience for our users. By continuing to browse this site, you give consent for cookies to be used.
Got it!
Home > Politics > Councillor grilled over donut joke, gaping holes in report on ‘Scott’s Excellent Adventure to Tennessee’ 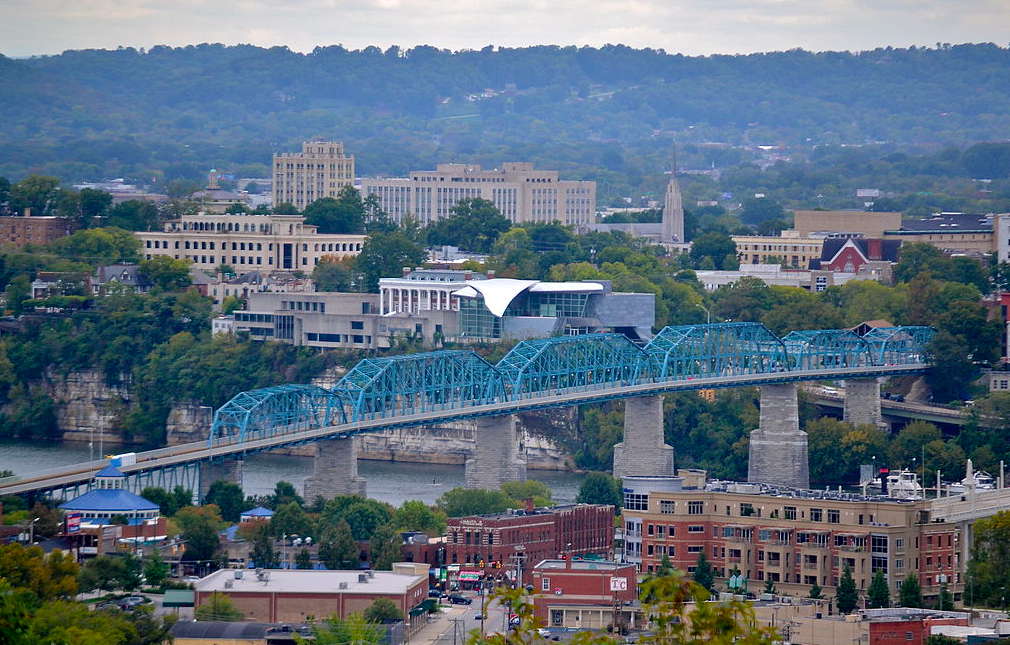 Coun. Scott Moffatt, chair of the City of Ottawa's environment committee, traveled to Chattanooga, Tennessee (seen here) in September to visit a private test facility that consumes garbage. His report on the trip, during which he was accompanied by the director of the city's waste services division, cost nearly $1,500. His report to city councillors contained almost no information about the waste facility, but joked that he brought Krispy Kreme donuts back to Canada. [Photo: Creative Commons]
Environment

It’s been one of the most challenging issues for Ottawa Council in recent decades: How to find a long-term solution to the city’s waste management problems.

The City of Ottawa’s decade-long “Plasco fiasco” — a common take on the local firm that had planned to use super-heated plasma gas to turn garbage into electricity — ended in 2015 when the company filed for bankruptcy protection. Along the way, in 2008, there was controversy over a Plasco-paid trip to B.C. for a city councillor and Ottawa’s top garbage bureaucrat for a promotion of the company’s technology.

So when Rideau-Goulbourn Coun. Scott Moffatt — chair of the city’s standing committee on environmental protection, water and waste management — took a trip to Tennessee last September to investigate a Chattanooga waste facility with Marilyn Journeaux, the city’s director of solid waste services, Ottawa residents might have expected to hear some insights into whether the technology used at the U.S. plant could help solve this city’s garbage troubles.

But instead, local citizens, journalists and even city councillors reading Moffatt’s report on the September 2019 trip got this: a joke about “Scott’s Excellent Adventure to Tennessee” on taxpayers’ dime, a wisecrack about the councillor bringing some Krispy Kreme donuts home to Canada — “Unfortunately, I did not bring back enough for members of Council. My carry-on was only so big” — and virtually no information about the Tennessee garbage-cooking plant.

Among those who raised their eyebrows at Moffatt’s oddly flimsy report to his own committee on June 16 was Kanata South Coun. Allan Hubley.

“If we’re going to pay for somebody to take a trip like this, we need to know a lot of info that we can’t just get on the internet by looking at this place,” Hubley, a member of the environment committee, told Capital Current.

Moffatt’s report failed to include any significant details about the Tennessee facility and its technology, the waste company Landaira that owns the plant, the cost or capacity of the site, nor any pros or cons taken away from the visit.

The report simply stated that “it was evident that what they are doing works” and concluded as follows: “We will need to be creative to find the best solution for waste in our city. While reduction and diversion will remain are [sic] highest priorities, we need to find a better way to manage the rest. Landaira presented an option that is well worth exploring further. I look forward to continuing to find solutions to handling municipal solid waste in the City of Ottawa.”

Public expense-disclosure records indicate Moffatt spent $1,494 on flights and hotel for the trip to Tennessee from Sept. 23-25, 2019. A comparable amount, presumably, was spent by Journeaux.

During the June 16 city meeting, held via videoconference because of the COVID-19 pandemic, Hubley and Moffatt engaged in an awkward exchange about the trip and Moffatt’s brief, half-joking report.

Moffatt introduced the item by remarking sarcastically that: “I’m really surprised — I’m honestly surprised — there’s no delegations on this: This is my report on a trip to Chattanooga, which I am required to report on.”

Moffatt then referenced “the Plasco situation and how that did not work out for the city,” and noted that the Tennessee test facility could represent “a potential solution.”

“Can I ask you a question, Mr. Chair?” said Hubley. “The report doesn’t go into much detail about what you actually saw down there — like what the process was, how does it work, what’s the cost per tonne — the kind of information that we would need as a council, as a committee, to make informed decisions on whether this is an option we want to consider.”

Moffatt replied that “this year was really exploratory” but that “we were talking about tonnage and different things,” along with Ontario regulations for running waste facilities.

“With all due respect,” said Hubley, “I think that’s how we got into the problem with Plasco — that there were too few people involved in the decision-making process. So, I’d like early on for the committee and council to have a lot of information about these different options so that we as a committee, under your leadership, can make an informed decision.”

“Well, they don’t have Tim Hortons in Chattanooga,” Moffatt replied, “and my kids really like Krispy Kreme.”

“I’ll admit the report that I created was a bit facetious,” Moffatt later told Capital Current.

Moffatt said Landaira had reached out to him about a year ago with potential solutions for Ottawa’s waste processing.

“They suggested I come down and see the technology first-hand,” explained Moffatt. “We get a number of unsolicited proposals like this, and what really matters is: can it actually be viable in Ontario?”

When asked why he included lines about donuts, Moffatt answered: “It’s just what I do. I never take myself too seriously. Also, my kids really love Krispy Kreme donuts.”

Moffatt acknowledged his report felt short on requirements expected in a formal city document intended to properly inform the public and update other elected officials.

According to Moffatt, the company, Landaira, is still missing some key components before council could move forward on this potential option for waste management. That’s why, he said, he did not deem it necessary to write a lengthy report.

“I think if I came back and think this is something we are going to do, then that report would have been more in-depth, because I would’ve needed to make sure that council has the information that they need in order to support going forward with this. But up until now, we are just not there yet,” said Moffatt.

My point was, you’ve got to tell us what you learned when you were down there and not just to us as councillors — I think the residents of the city want a little more detail like that.”

Moffatt’s report states: “Landaira presented an option that is well worth exploring further.”

“I’m not going to pass judgment on him,” Hubley told Capital Current. “I just asked for more detail in the reporting. … My point was, you’ve got to tell us what you learned when you were down there and not just to us as councillors — I think the residents of the city want a little more detail like that.”

Hubley added: “We owe that to the taxpayer to report back properly of what we saw. . . There seems to be a lot more attention to donuts than anything else in the report.”

Although Moffatt did not provide much substantial information to fellow councillors or the public in his report or in his comments to the environment committee, he and Journeaux elaborated on the Tennessee test plant to Capital Current.

On the second day of their trip, Journeaux and Moffatt took an hour-long ride to visit the Carbon Black Global/Landaira test facility.

According to Journeaux, the company has repurposed old technology in a new way.

“It was very interesting to see,” said Journeaux. “It’s basically a pilot-scale plant and definitely has a possibility of becoming a full-scale technology that is used in other industries.”

Moffatt said he saw two waste processors, each about five metres tall, at the site.

“It is like a big pressure cooker,” he said. “The workers dump piles of waste inside the cooker, close the doors, and four hours later, there is really nothing left.”

Moffatt explained: “The metal comes out sanitized. Let’s say there’s this can of beans, the can comes out with no labels because it is all been cooked out. There is no actual flame, so it is not incineration — it is just pressure.”

According to Landaira’s website, “the Landaira patented gasification system transforms carbon-based materials into ash, carbon residue, and synthetic gas. It is engineered for municipalities and landfill operators to reduce a variety of solid waste with little residue.”

Moffatt said the processors do not have the capacity to accommodate all of the waste currently produced in the city of Ottawa.

“What they would need to process Ottawa’s waste is potentially 30 of these things,” said Moffatt. “So, it is not anywhere close to a point in which we can sit and say this is a viable option for the city of Ottawa.”

According to Moffatt, there’s no need to use outside space for these waste processors since it is a scalable technology.

“It is just a building with this inside,” he said. “Because this is a scalable type of technology, you can create small-scale and move it around and move them across the city, reducing the truck costs.”

However, Moffatt does not think this company is ready yet for a pilot project in Ottawa.

“The fundamentals sound good,” he said, “but in terms of the data and proof and evidence, we just don’t have them there.”

Waiting for Stage 2: Toronto and Peel to move on, Windsor-Essex fails to meet reopening criteria