5 days ago 0 6 min read
We use cookies to provide a personalized experience for our users. By continuing to browse this site, you give consent for cookies to be used.
Got it!
Home > News > Transit > Dangerous downtown cycling route to get major revamp 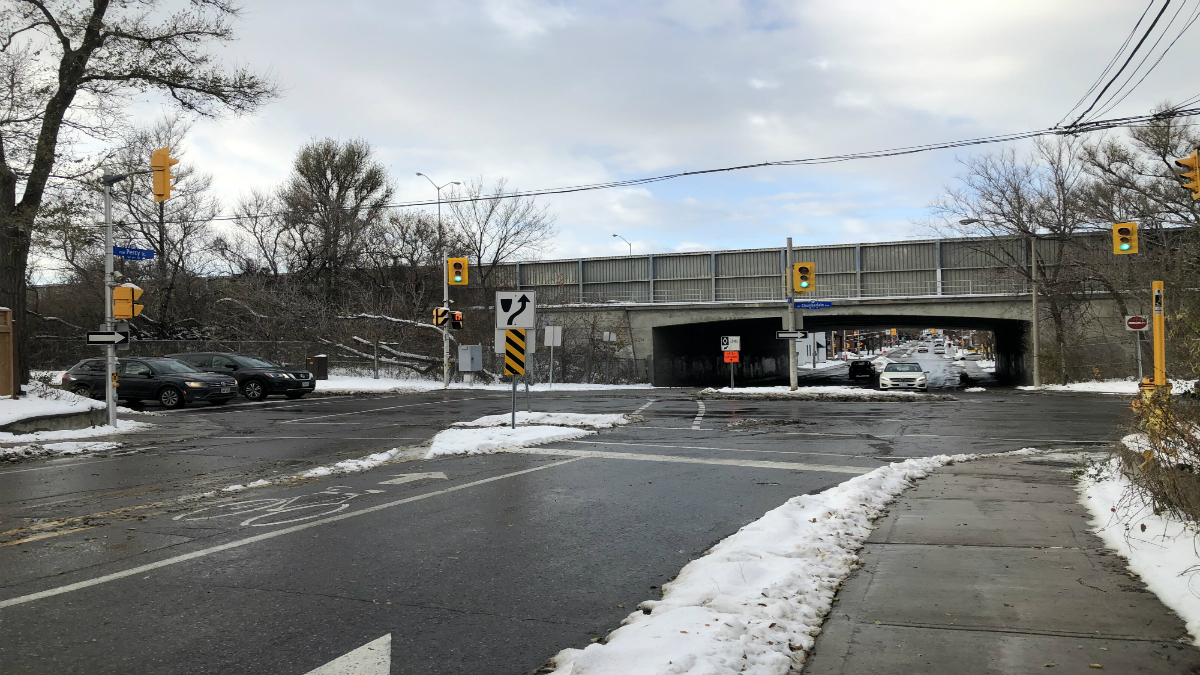 The busy roads leading to the corner of Percy and Chamberlain streets, above, are among the dangerous stretches of downtown Ottawa that will be part of a major upgrade over the next eight years to create a cyclist-friendly, multi-use pathway just south of the Queensway. [Photo @ Alyssa Harris]
Ottawa

After a harrowing year for cyclists, a dangerous stretch of road in downtown Ottawa has been given the green light for a major, multi-stage upgrade over the next eight years. The idea is to create a bike-friendly, multi-use pathway just south of the Queensway.

The news about the planned cycling route along Chamberlain and Isabella streets between Percy and Elgin was revealed in a tweet by Capital Coun. Shawn Menard last month.

In a follow-up tweet, Menard laid out the scope of the project scope with four maps. These maps show more detail and the specific intersections that will be redesigned: Chamberlain and Percy, Metcalfe and Isabella, Isabella and O’Connor, and Isabella/Chamberlain and Bank.

The planned project began to take shape this past June when the city of undertook a functional design study for the downtown streets that run parallel with the Queensway: Catherine Street, Chamberlain Avenue and Isabella Street. The project also covers two smaller sections of Metcalfe and Bank Street that intersect with the Queensway.

The study included opportunities for the public to get involved through open houses for stakeholder groups. For example, several members of Bike Ottawa, the city’s main cycling advocacy organization, attended and provided feedback — and strong overall support for the initiative.

There is no set timeline for the project, which is expected to take up to eight years. Work will be done as the roadways are upgraded.

“It just depends on the (provincial) Minister of Transportation … and our own funding for the project,” Menard says. However, the announcement comes as good news, and the changes could happen sooner, he adds.

The announcement was praised on social media with many users thanking and congratulating Menard.

However, some cyclists from outside downtown Ottawa say the planned changes are only a small improvement in a city with countless safety problems on cycling routes.

“I have been a commuter for over 20 years and quit this year because it has become so dangerous,” said Ariane Cloutier, from an Ottawa cycling Facebook group. “Perhaps if you live downtown, they have invested in infrastructure, but I can tell you that they have done little for the east end, especially if you are not going downtown but south or simply west.”

She said vehicle traffic is a key problem, adding that she believes many motorists make cyclists feel unwanted on the road.

Menard said improvements to cycling infrastructure are happening outside the downtown. “We just implemented some bike lanes on Heron Road,” he noted. “I think that was a project we got moved up, so we’re really happy about that.”

He said some upcoming projects located farther from downtown may have raised cycle lanes.