4 days ago 0 4 min read
We use cookies to provide a personalized experience for our users. By continuing to browse this site, you give consent for cookies to be used.
Got it!
Home > News > Environment > Delayed management plan for Rideau Canal now set for December 2020 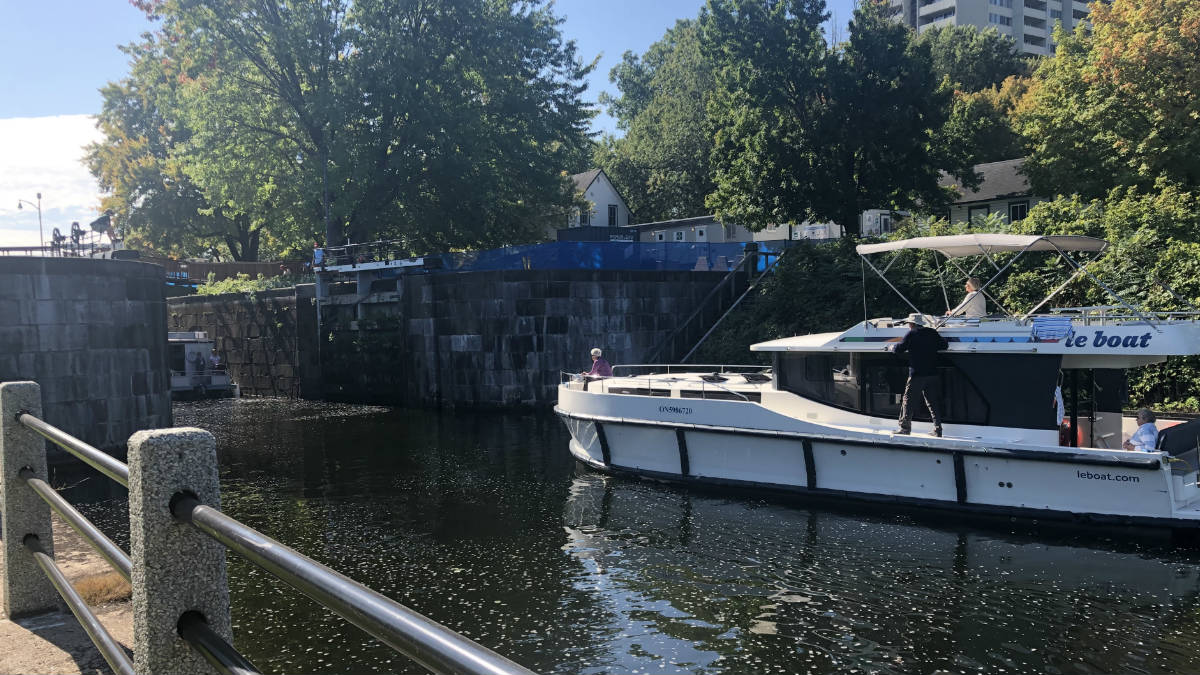 Boaters travelling along the Rideau Canal at the Hogs Back Locks. [Photo © Megan Costa]
Environment

A Rideau Canal heritage advocacy group says a long-overdue canal management plan must include plans to increase public knowledge of the cultural and ecological significance of the 200-kilometre waterway between Ottawa and Kingston.

The Friends of the Rideau is a non-profit organization of volunteers who feel passionate about the Rideau Canal. They work to “promote and conserve the heritage and charm” of the waterway.

The management plan as outlined in the Parks Canada Agency Act, is meant to structure and organize the protection of a heritage site’s “commemorative and ecological integrity.” Parks Canada is in charge of delivering management plans for major heritage sites under its jurisdiction every 10 years to the federal Minister of Environment and Climate Change.

“The Rideau is a large and complex system,” says Ken Watson, a canal advocate and former member of the now-disbanded Rideau Advisory Board. “We have everything from boaters to water control, operating the locks, et cetera.”

“But the biggest problem we see to today is that people do not see the heritage values of the canal, and that’s the failing of Parks Canada.”

That deadline was later reset for 2020.

“Most people think the canal is just the bit that goes from Parliament Hill to Hog’s Back,” says Hunter McGill, a member of the Friends of the Rideau and a long-time Ottawa resident. “People in Ottawa are surprised to learn that, in fact, it goes all the way to Kingston.”

Ottawa residents are very familiar with the canal. It’s a route for boaters and paddleboard enthusiasts — as well as cyclists and runners — in warmer months. And each winter for nearly 50 years, the 7.8-km surface of the canal through central Ottawa has been turned into the world’s largest skateway.

But the canal extends much deeper into Ottawa’s history.

“Kingston existed before the canal,” says McGill. “But Ottawa was founded as Bytown by Col. John By, who was the designer, engineer and chief of the canal. You could say that without the Rideau Canal there might not have been a city of Ottawa.”

The Rideau Canal opened in 1832 and for the most part has operated as a slack water canal ever since. Only three of the locks have been substantially modified and all 46 others are still operated manually.

“The Rideau Canal is the oldest continuously operating canal in North America,” says McGill. “It’s really quite exceptional – something we should be very proud of.”

In 2007, the Rideau Canal was designated as a UNESCO World Heritage Site, an honour it shares with the Egyptian Pyramids and 1,120 other iconic cultural and natural sites around the globe.

In a recent statement, Parks Canada said its management plans “guide management decisions and actions at a heritage place, and serve as a key accountability document to the public.”

“It’s always been a fundamental mandate of Parks Canada to not only preserve historic sites and national parks but to also make the public aware of their historical significance,” says Manuel Stevens, former Rideau Canal planner for Parks Canada.

Canals, however, are more difficult to deal with as heritage sites because other factors come into play, says Watson.

“Canals are not well understood within Parks Canada,” says Watson. “People can understand that (Fort Wellington) is a national historic site. But (the Rideau) is an operating canal, so it’s a bit of a different beast.”

If the new plan doesn’t have adequate policies to preserve the world heritage values, the canal is at risk of losing its heritage status — although Stevens says that’s unlikely.

“Parks Canada would not jeopardize its status in any way,” says Stevens.

“These places aren’t just for people to enjoy themselves. It’s important people understand why we have these sites and what their significance is to the nation,” says Stevens.

When asked what major concerns will be addressed in the new plan, Parks Canada stated: “It is too soon to determine what the next park management plan will focus on.”

But the agency said it would meet the latest deadline for the updated plan.