5 days ago 0 6 min read
We use cookies to provide a personalized experience for our users. By continuing to browse this site, you give consent for cookies to be used.
Got it!
Home > News > Transit > Dissatisfied Para Transpo riders demand changes to the system 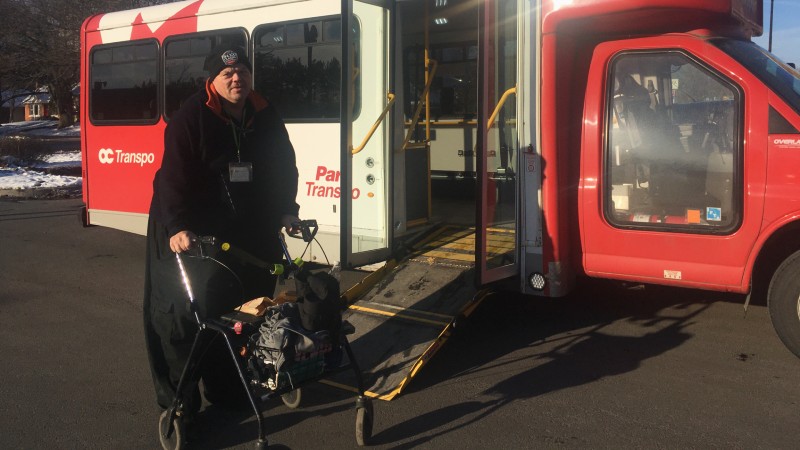 John Redins is a long time Para Transpo rider who is look for big change in the system. [Photo @ Emilie Warren]
Transit

Late buses, long wait times, missed appointments: These may be new issues for commuters riding the LRT, but Para Transpo riders already know that feeling all too well.

Para Transpo is a reservation-only bus service for Ottawa residents who cannot take conventional transit because of a disability. It is run by OC Transpo, the city’s public transit agency. Passengers pay $3.60 for a standard ride.

People who use the service don’t like the booking system, its scheduling process or its often-delayed buses. Fed-up Para Transpo riders are now mobilizing to press for better service.

A matter of priorities

Para Transpo user Kyle Humphrey said he was frustrated by this announcement. “If they were able to give [$3.5 million] without asking anything to [fix] LRT issues and OC Transpo issues, they can (also) give that money to (fix) Para Transpo issues.”

“When the LRT is down, there’s every single city councillor tweeting … ‘it’s coming back up, we’re going to do this, we’re going to fix that’,” he said, adding Para Transpo has been “down for 10 years” and no one had addressed that.

Para Transpo riders used to advocate for better service independently from each other, said Redins. This year, he said many have joined forces.

Redins and other riders launched the Para Parity campaign in January 2019, with the help and guidance of the Healthy Transportation Coalition and its co-founder, Trevor Haché. The coalition is an advocacy group that focuses on improving the transportation system in Ottawa.

“We want parity with the OC Transpo system and the OC Transpo users,” said Sally Thomas, a former Paralympian and regular Para Transpo rider speaking about the campaign.

Members of the campaign are active on social media, attending city council meetings and trying to attract media attention.

Para Transpo will receive an additional $2 million in the 2020 budget. This investment will be used to improve services and increase the number of supplementary trips provided by taxis contracted by Para Transpo. Para Transpo offers its customers the possibility of booking accessible taxis at a discounted rate if buses aren’t available.

That’s not enough according to Thomas. She said Para Transpo needs more buses, not taxis.

Thomas said she doesn’t feel safe using taxis because she’s a small woman. She said she once took a taxi and the driver picked up another passenger without asking her, even though that’s not permitted.

Thomas says she feels disrespected by the service disparity she sees between OC Transpo and Para Transpo.

Allan Hubley, the chair of Ottawa’s transit commission, said he does not see an issue with Para Transpo’s fleet. “We seem to have enough buses,” he said.

Jean Cloutier, the commission’s vice-chair, said that Para Transpo was able to accommodate “almost 100 per cent of the trip requests” with the buses and taxis it had at its disposal. He said the issues are scheduling, booking, and weather-related.

The promise of a new booking system

After years of asking, Para Transpo riders will finally get an online booking system.

The system will be fully implemented by the end of 2020. OC Transpo announced a two-phase implementation for the service at a transit commission meeting on Nov. 20.

Para Transpo riders now must call at least one day in advance of their desired travel date to book a ride. They often have to wait on the phone for more than 20 minutes before being connected to a booking agent.

The transit commission first inquired about implementing an online booking system in 2013. Public consultations were held in 2015 and again in 2018. Neither led to immediate action.

“The Para community could not reach a consensus on whether they wanted to move to online booking,” said Hubley when he was asked why the city postponed acting on the matter.

The current booking system also affects riders’ ability to make spontaneous plans, because it does not enable same-day bookings.

“You have to plan your life 24 hours in advance, that’s one of the biggest issues,” said Redins. “It affects the passenger’s mental health.”

Redins recalled an unpleasant experience on Nov. 16 when he won tickets to a comedy show, but couldn’t go because Para Transpo could not accommodate a same-day ride for him.

“I was lost,” he said. “I wanted to go see something that I thought was going to be funny, and I couldn’t.”

The city is not considering enabling same-day reservations in the new online booking system.

In comparison, Toronto’s accessible transit system offers same-day bookings, and has had an online booking system since 2004.

Winter is coming… and so are its challenges

Winter brings an extra set of hardships for people with disabilities that makes them even more reliant on Para Transpo.

“It doesn’t take much snow for me to be [stuck],” said Thomas. “I’ve been stuck outside in the winter … it was -20 C or something and I got stuck on a patch of ice.”

Humphrey said he prefers to take regular transit because it is faster and more flexible, but that it’s impossible for him to do when sidewalks aren’t cleared of snow. He has to choose between being “stuck inside” or wasting time waiting for Para Transpo buses to arrive.

“It’s not going to take me more than five minutes to walk down the street [the rest of the year],” he said, “but it’s the middle of winter so I have to take a (Para Transpo) bus, I would need to wait for that half hour.”

The City of Ottawa received a lot of criticism last year for failing to remove snow from sidewalks.

“The snow clearing last winter was atrocious,” said Thomas. “Many people couldn’t leave their houses because [they] couldn’t get anywhere.”

The social isolation that can occur from being forced to stay at home can have significant impacts on mental and physical health. Social isolation and loneliness can increase the risk of depression, dementia, poor sleep, and is more harmful to one’s health than obesity, according to the BC Centre for Disease Control.

This year, Ottawa announced it would increase the winter operations budget by 7.7 per cent, adding $5.6 million in funding to improve snow clearing efforts.

What does the future hold?

In addition to his organizing campaign, Redins created a GoFundMe page to obtain the help of a legal team. He hopes to challenge OC Transpo in court for human rights violations.

He also created a Facebook group called Para Transpo Group Woes, where riders can connect and share their experiences and frustrations.

Whether their woes will be soothed by the promised improvements remains to be seen.

Legal cannabis not so green