3 weeks ago 0 4 min read
We use cookies to provide a personalized experience for our users. By continuing to browse this site, you give consent for cookies to be used.
Got it!
Home > Arts & Culture > Music > Dominion Carillonneur plays the Voice of the Nation 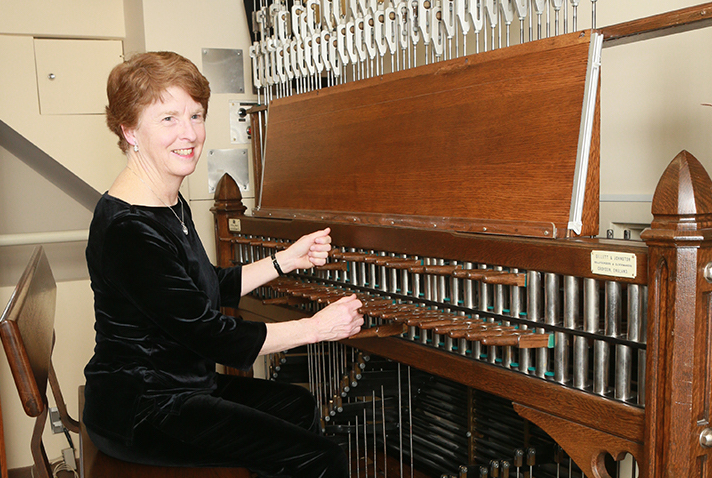 If you’ve ever been lucky enough to be near Parliament on a weekday afternoon, then you’ve likely heard the music coming from the Peace Tower. These pieces can range from renditions of the national anthem to K’naan’s “Wavin’ Flag.” Millions of people have heard these compositions, but very few know what instrument is playing them. Even fewer know the woman who plays it.

The instrument is called a carillon. Carillons contain a minimum of 23 bronze bells that are played through a combination of keyboards that are played by hand and by foot. The carillon in the Peace Tower contains 53 bells. Commissioned to commemorate the Armistice of 1918 ending the First World War, the instrument debuted on July 1, 1927 with a ceremony led by then-prime minister Mackenzie King, who called the carillon “the voice of the nation.” The carillon is played live every weekday at noon for 15 minutes by the Dominion Carillonneur, Dr. Andrea McCrady. Additional sessions are scheduled to reflect significant events, such as the recent 30th anniversary of the École Polytechnique massacre. McCrady has continued delivering her regular performances despite the 2019 shutdown of Centre Block for renovations that are expected to continue for a decade.

McCrady discovered the carillon in her undergraduate years at Trinity College in Hartford, Connecticut. McCrady sang in the concert choir, where she met members of the carillon club. They showed her the carillon in the college chapel tower and she “was captivated by the beautiful sounds,” she said in an interview. McCrady earned a medical degree at McGill University, but she pursued her passion for the carillon throughout her university career, studying with professional carillonneurs in North America and at carillon schools in Europe. After running a medical practice in Spokane, Washington, she retired in 2006 to pursue a Bachelor of Music from the University of Denver. McCrady was named the Dominion-Carillonneur in 2008 after a worldwide search to replace her predecessor, Gordon Slater. This is how an American citizen ended up playing music in the heart of Canada’s capital.

“People have no clue what a carillon is until at least they see how it’s played,” McCrady said. A practice instrument, resembling a wooden piano with separate sets of keys for your hands and feet, resides in a small area tucked away in McCrady’s spacious office in the East Block. Her office also holds the archives of the carillon. Sheet music and recordings of the instrument dating back to the 1920s line the walls, along with other carillon-related documents. From the Peace Tower to her office, McCrady is surrounded by history.

McCrady remembers her debut on Parliament Hill all too well.

“My first day was everyone’s anxiety dream. I had no chance to rehearse on the practice keyboard or (in) the tower,” said McCrady. “There were three huge TV cameras circulating in a very small room (in the tower) … to get any angle they can.” As she cast her mind back to the media coverage of her first day on Nov. 3, 2008, the melodic tunes of a practice carillon played by student Chieko Tanaka permeated the room. The soft notes echoed throughout the office space as McCrady continued to speak.

After nine years in Ottawa, McCrady became a Canadian citizen in 2017.

Becoming a Canadian citizen had “basically been a dream of mine for over 40 years. I always said that Canada was my second home, and now it’s my first,” said McCrady.

McCrady became a dual Canadian-American citizen during the Canada 150 celebrations, at a ceremony on Parliament Hill on Canada Day. “I was telling all the journalists my dream is to play ‘O, Canada’ on the Peace Tower carillon on Canada Day and then come down and swear in as a new citizen

McCrady teaches at Carleton University, as a part of its Certificate in Carillon Studies program. Established in September, 2011, it is the first and only carillon program in the country. The United States, by comparison, offers several postsecondary options for carillon study. Four students from Carleton have completed the carillon certificate, with an average of one to two students enrolled at a time. Students must pass a piano or carillon audition to be accepted into the two-year program but are not required to be able to play the carillon prior to enrolling. They must also have completed the Grade 8 level of the Royal Conservatory of Music and have received approval from both the Dominion Carillonneur and the music program. McCrady teaches carillon performance technique, the history of the carillon, the mechanics of the instrument, and carillon repertoire.

Chieko Tanaka, who started the program this fall, said McCrady is a gifted teacher: “I really love her,” Tanaka said. “I’m really glad I could see her through the carillon (program).” Tanaka has practised music since she was young, playing the piano as a child and, more recently, occasionally acted as an accompanist in the Japan Women’s Choir in Ottawa.

As she speaks, Tanaka is perched on a large wooden bench in front of the practice carillon. The instrument towers over her, and yet she is determined to conquer it.

McCrady plays all kinds of music on the Peace Tower carillon, ranging from renditions of the “Imperial March” to “Santa Baby.” Asked to describe one of the strangest pieces she has ever played in the Peace Tower, she recalls playing a series of tunes for the Christmas lights display on a cold winter morning: “The story was (that) a fox, a bear, and a snowman meet up and decide they are going to take a train to the North Pole together…So (finding a song for the) snowman, that’s easy — Frosty the Snowman, Bonhomme de Neige, lots of stuff like that. (For the) train, the Polar Express… (For the) bear…a ragtime piece called ‘The Grizzly Bears.’ But the fox — what was I going to do about the fox?”

In the end, she chose “What Does the Fox Say?,” a quirky electronic-dance pop song by the Norwegian band, Ylvis, that was popular at the time. “So, I adapted it to the carillon. I do not think it was a success and have not continued to play it,” McCrady said, with a smile.