3 days ago 0 2 min read
We use cookies to provide a personalized experience for our users. By continuing to browse this site, you give consent for cookies to be used.
Got it!
Home > News > Transit > Ecology Ottawa urges better access to Blair Station 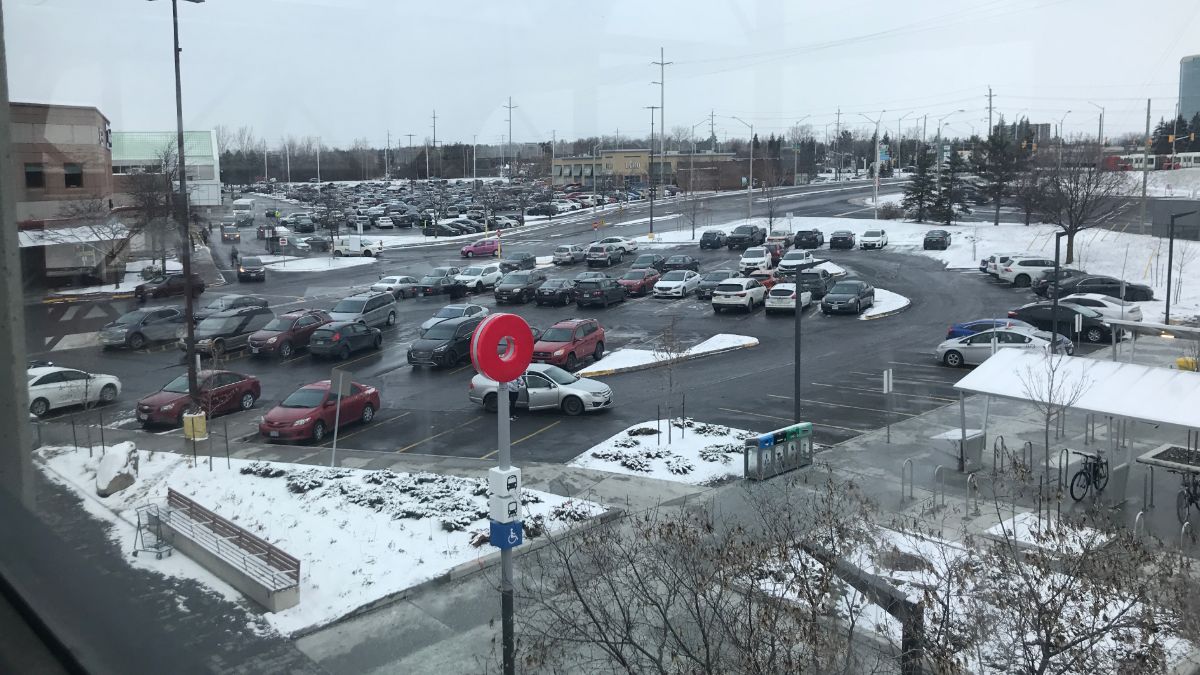 Gloucester Centre parking lot as seen from Blair Station. One of Ecology Ottawa’s key recommendations is for the city to take greater ownership of the area to improve pedestrian and bike access to Blair Station. [Photo © Jack Moulton]
Environment

Ecology Ottawa wants the city to improve pedestrian and cyclist access to Blair Station, the eastern terminus of the LRT’s Confederation Line.

The local environmental group conducted cycling and walking audits of the station this past summer and recently presented its findings to residents of the nearby Pineview community.

The executive director of Ecology Ottawa, said the audits propose measures that should steer future development around the LRT line throughout the city.

“In the city’s own words, they say 70 per cent of Ottawans will be within five kilometres of light rail,” Robb Barnes said. “We wanted to make sure it was transforming (the city) in the right direction, as in favouring vulnerable road users.”

The report states that by identifying the challenges that cyclists and pedestrians face accessing light rail, the city can be at the “forefront of the global urban movement” to improve climate action, public health and community well-being.

One recommendation seeks the improvement of signage along surrounding roads, including Blair Road, Ogilvie Road and City Park Drive, as well around the pedestrian bridge to the station over the Queensway.

The report said that while roads are well marked, more could be done to identify pathways, bike lanes and links to transit hubs.

Other recommendations include better lighting on pedestrian and cycling links, more street furniture and street art around the station, improved tactile and auditory signals at nearby intersections, and improved signage and access for those with mobility impairments — especially for the Queensway pedestrian bridge.

The nearby Gloucester Shopping Centre also posed an accessibility concern for auditors, as the station directly backs on to an expansive commercial parking lot.

The audit report notes that the private ownership of the busy roadways and parking lots in the Gloucester Centre commercial area mean it is not always clear where responsibilities for making improvements lie. The report recommends that the city take greater ownership of this area to be able to implement changes to improve access to the station.

Beacon Hill-Cyrville Coun. Tim Tierney said he is aware of the poor road and parking design around Blair Station, adding that he will advocate for changes when the area welcomes new development.

“We have a good opportunity coming up very soon,” Tierney said in an interview, referring to plans for a 30-storey apartment close to Blair Station. “That means a complete reconfiguration, which would address many of those issues.”

Tierney said construction of the new apartment building would provide an opportunity for the city to collaborate with property owners to design a safer traffic environment at the Gloucester Centre property.

The report also called for traffic calming measures on the surrounding roads to curb the “fast and aggressive” traffic observed by auditors. These measures include raised sidewalks and segregated bike lanes.

Tierney also elaborated on this point, explaining that the city had recently reduced the speed limit from 70 kilometres per hour to 50 km/h, and installed devices that collect data on the speed of passing cars.

He also informed residents at the Nov. 28 presentation that he had pushed forward a proposed expansion of Blair Road south of Hwy. 174 to Innes Road to be addressed in the next city budget.

Blair is a two-lane road with wide shoulders for cyclists and pedestrians. Tierney explained that while the seasonal flex posts separating the road and the shoulder are effective, drivers would still cross into the shoulder in the winter when the flex posts are removed.

The proposed expansion would see the addition of a segregated sidewalk on the west side and cycling tracks on both sides of the road, as well as bus and high occupancy vehicle lanes.

Tierney said dedicated bus lanes are needed to relieve traffic problems on Blair, and improve access to the station.

“I think the reception was really positive,” said Scott. “I think that what came out loud and clear was that a lot of the residents had the same concerns. We were all kind of on the same page in terms of what are the areas that need addressing, and what are the projects that need to be advanced.”